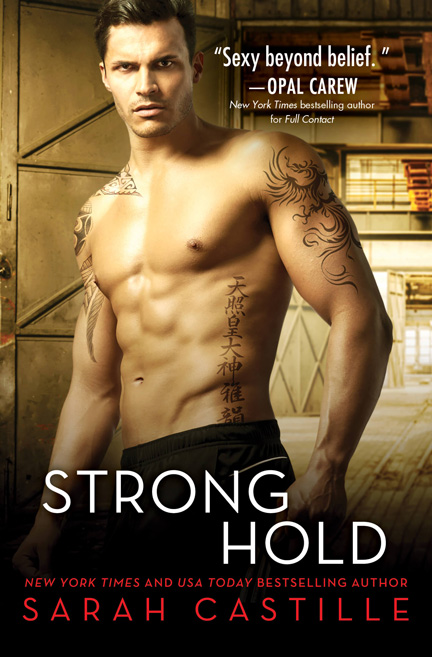 For the longest moment Zack’s brain couldn’t process the sight in front of him. Fight promoter Zack Grayson is on the prowl for a rising star. As the top recruiter of a prestigious MMA promotion company, he wants to take someone where he will never be able to go again: the top of the professional league. He didn’t expect that someone to be the woman he loved…and left.

Top-ranked MMA amateur fighter Shayla “Shilla the Killa” Tanner built walls around her heart when Zack left her seven years ago—and again when her husband turned violent. Now, seeing Zack is nearly enough to send those walls crumbling. But she can’t risk the exposure of the limelight, and she definitely can’t risk another heartbreak.

As Shayla and Zack grow closer, though, business turns personal. And once their passion unleashes, there’s no going back…

A disturbance near the door draws our attention. Zack is here. How irritating. This was supposed to be my night to get drunk and forget he ever walked back into my life. But chances are he’ll never make it to our table. Already, the crowd is three deep around him with no end in sight, and there are fangirls clinging to him like flies.

Zack’s star power keeps him occupied and away from our table for the next hour. He signs napkins, arms, cheeks, and even the curve of one woman’s ass. Before long, he is steered to the wall bearing the Protein Palace logo to pose for pictures with his fans. I don’t want to watch him, but I do. I’ve never loved anyone the way I loved Zack. I opened myself fully to him. I gave him everything, and he filled me so completely, I never wanted more. Every time I see him, the memories come flooding back. Ten years of happiness destroyed by one night of pain.

“He’s been checking you out,” Doctor Death says, a scowl marring the perfection of his handsome face as he stares at Zack, posing with two eager fangirls.

Zack looks devastatingly gorgeous tonight in his tight, black skull-print T-shirt, stretched deliciously over his muscular chest, and a pair of well-worn jeans, snug in all the right places. From the way the fangirls have latched on to his biceps, I’m not the only one to notice.

“I heard a rumor you had a history together,” Doctor Death continues.

Zack catches me watching him, and in that second when our gazes connect, I remember every reason why I loved him. The way the gold flecks sparkled in his dark eyes when he was happy, the way he watched over me, his easy laughter, the feel of his body against mine, his lips on my lips, his breath on my skin, his hands—God, the things he could do with his hands—the steady beat of his heart as we lay together making dreams for a future we would never have.

After Zack finishes posing for pictures, Fred “Bulldog” Jenner, a heavyweight fighter from a rival gym and one of Sadist’s fiercest competitors, challenges Zack to an arm wrestle. Such is how fighters entertain themselves when they’re training. No fights in case of injury, no excessive drinking because of calories. But when fighters are pumped, as they usually are at this time of day, they need an outlet, and the Protein Palace has a special table set aside for the occasion.

Zack graciously accepts the challenge. Although he and Bulldog are evenly matched in height—two or three inches over six feet—Bulldog is actively training and must outweigh Zack by at least fifty pounds of solid muscle. Still, Zack clearly hasn’t let himself go as many retired fighters do. There isn’t an inch of fat on his toned body. And God, those biceps…

Not wanting to be left out, I join the crowd around their table. Although this is just for fun, there is more at stake than just a friendly arm wrestle. Zack was a big, big name in the sport, and Bulldog is shooting for the pros. A win over Zack sends a message that Bulldog is the man to beat. Out with the old and in with the new.

My heart thuds in my chest when Bulldog clasps Zack’s hand. Although it makes no sense, I want Zack to win. He started from nothing and worked hard to get to where he is, and no one knows that better than I do. Despite what happened between us, I am a secret Slayer fangirl, too.

Biceps flex. Hands grip. A hum of excitement winds its way through the crowd. Bulldog grunts, and his arm shakes. Sweat beads on his forehead. He shifts in his seat, and his chair scrapes over the tile floor. The air thickens with the primal scent of testosterone. I’m surprised I don’t suddenly grow a beard.

Someone turns up the music, and the Black Keys’ “Everlasting Light” plays through the speakers. Zack’s lips turn up at the corners. He lifts his gaze and smiles at me.

Because this was our song. We had both loved this band with its steady beats, old-time sound, and meaningful lyrics. “Everlasting Light” was the song Zack had strummed on his bass while I practiced at the studio late into the night. It was the song he had asked the band to play when he had danced with me at my grad. It was the song he had sung softly to me after we had made love. And I had believed the lyrics as if they were his words. I had believed he wanted to be my sun in the darkness and my everlasting light. They were the last words I had heard him say. They are the last words I want to hear now.

A sigh escapes my lips, and although there is no possible way he could have heard me over the music or the chant of the crowd, his face tightens, and the gold in his eyes fades to black.

“Who’s next?” someone shouts.

The crowd hoots and hollers, and names get bandied about. The noise makes my headache worse, and I turn back to the Redemption corner, looking for Doctor Death. Maybe I will take that ride.

A chair scrapes over the floor. And then a table. People shift to the side as if to give way.

My pulse kicks up a notch, and I know, without being able to see through the crowd, that he’s coming for me.