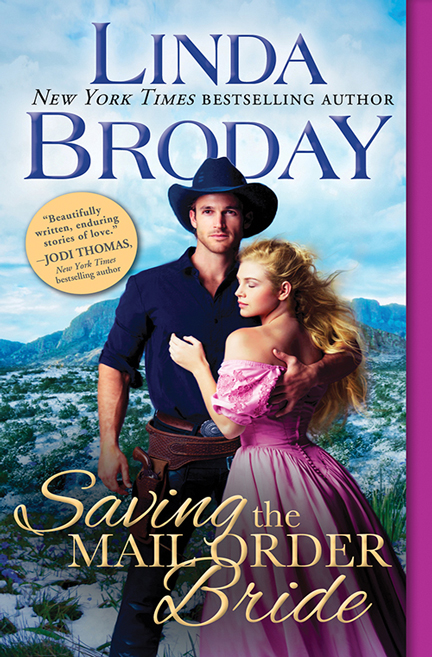 He may be a wanted man, but all outlaw Jack Bowdre ever desired was a second chance. Now he’s on his way to jail, completely unaware that his unexpected—and unexpectedly beautiful—traveling companion is none other than Nora Kane…his mail order bride.

It’s too bad Nora doesn’t know Jack is her groom-to-be. All she sees is a scoundrel. But when their stagecoach crashes and the truth comes spilling out, they’re suddenly left to fend for themselves—and each other. What People Are Saying About Linda Broday:

“A shining example of the talent of one of the best historical western authors.”—Fresh Fiction for Forever His Texas Bride He may be a wanted man, but all outlaw Jack Bowdre ever desired was a second chance. Now he’s on his way to jail, completely unaware that his unexpected—and unexpectedly beautiful—traveling companion is none other than Nora Kane…his mail order bride.

It’s too bad Nora doesn’t know Jack is her groom-to-be. All she sees is a scoundrel. But when their stagecoach crashes and the truth comes spilling out, they’re suddenly left to fend for themselves—and each other. The longer they’re together, the stronger their feelings grow. Hounded by desperate men bent on doing them harm, Nora and Jack will do whatever it takes to find their happily ever after…but first, they’ll have to shake the devil from their trail.

“I’ve never kissed a man before.” Nora’s confession slipped out before she could stop it. But there it was. If Jack kissed her, he’d be her first.

His startled expression had at least gotten rid of the frown. “Not one?”

“No. There was a boy a long time ago, when I was a child, but none since.”

Jack quickly lowered his gaze to her hand. Evidently, he found the subject of kissing nothing to discuss. “Let me see your wrist. That handcuff is digging into you.” The chain between them rattled as he gently took her bloody wrist.

“I hated to complain.”

“Do you think you can part with another petticoat?”

She sucked in a shocked breath. “I beg your pardon!”

“I only need a piece. How about the ruined one?”

“So you can do what exactly?” The request hung in the air for a long moment.

“Fine. I wanted to bandage your wrist, but it’s entirely up to you.”

Nora stood and with one hand managed to shimmy out of the one he’d already ruined. She opened her mouth to tell him how dear every piece of clothing was and remind him that everything she owned was back at the wrecked stagecoach. But before she could speak, he grabbed the petticoat. A cry hung in her throat when he ripped off a long section.

“Sit down.” Mr. Bossy dipped the piece of cotton in a small amount of water that had yet to leak from his hat, took her handcuffed wrist, and washed the injury. Then he covered it with a dry strip of soft fabric. “This will protect you while I try to unlock our cuffs. Does that feel better?”

For a moment, his tender touch made her lose her train of thought. He truly was a man of contrasts. Hard and gentle. Gruff and caring. Threatening one minute, and full of concern the next. But she remembered how he’d protected her when the tracker rode above them. He’d been ready to give his life for her and had also fed her and kept her warm.

“Yes.” She smiled up at him, watching how the firelight flickered across the hard planes of his face. “Now let me doctor yours.”

“It wasn’t a question.” Her firm statement whipped his head around. “Your wrist is bleeding. I don’t want you to attract that wild creature scratching and scurrying around behind us. Yes, I know. It’s probably not dangerous. That’s why I haven’t dragged you from this cave.”

“You’re a high-handed woman. Know that?”

“Seems to make us well-matched, don’t you think?” She tore another strip from her petticoat with precise movements. “Now, your wrist, mister.”

Irritation darkened his eyes, but he held out his arm.

“My father often told me that I was my mother’s daughter. Neither of us were very biddable then, and I’m still not. That’s one reason I tossed away the key to these manacles. You ordered me to give it to you. Taking orders has never been my strong suit.” She wet a piece of the petticoat and gently washed his angry, raw welt. Although it had to hurt, that man would cut out his tongue before he admitted it. They appeared to share that trait too. “What are we going to do, Jack? Don’t you think we should get going? It’ll be dark in a few hours.”

“It’s lots better to be behind a posse than in front of one. We’ll let them put some distance between us and leave in the morning.”

That made a lot of sense. She finished doctoring his wrist and tied the end of the wrapping. “That should do it. Now, if you’ll stand, I’ll put the few remaining inches of my petticoat back on. I’m sure you’ll need the rest soon at the rate we’ve been going.”

“Obliged, Nora.” He held her upright while she slipped back into the ruined clothing. “Now I’ll see about getting these cuffs off if you’ll lend me your knife.” They sat down, and he took the sharp blade Nora handed him.

She smiled, watching how the flickering fire played across the light brown of his hair and touched his tanned skin that told of hours spent outdoors. Doing what? What did outlaws do when they weren’t…well, outlawing?

The stories in her dime novels hadn’t mentioned the subject. Maybe he worked with horses. Or maybe outlaws did like regular people—built houses, raised chickens and cows, cooked, washed clothes. She stifled a giggle at the thought of Jack in his hideout, washing his clothes and hanging them on the line to dry, sweeping the floor.

Warmth seeped into her as the wood crackled and popped. Even in the cave full of noises, she felt safer than she had in years. There was no need to worry about someone springing from a dark corner and killing her.

Jack’s feather-soft breathing brushed her skin as he bent over, working on the lock. A jolt of awareness swept along Nora’s body. His fingers were long, his hands strong. And, she reminded herself sternly, they belonged to someone who lived by the gun. Those dime novels of hers had portrayed outlaws as ruthless men, for the most part. That wasn’t Jack. She admitted his hard exterior had given her the wrong impression at first, but inside, he was gentle when he’d helped her across difficult terrain and at night when she slept curled against him.

Now each of his touches sent sizzling sparks through her, like when she’d once stood too close to lightning. She inhaled a ragged breath, trying to steady her heartbeat.

“You all right?” Jack glanced up, his gray gunmetal eyes piercing hers.

The fire crackled in the silence. Jack let out a frustrated breath and mumbled a curse then sat back. “The damn things won’t open.”