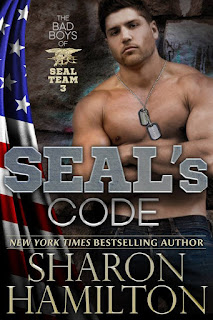 Danny Begay has tried to drive out the voices of his ancestors, but his Navajo roots will not die. Summoned back to Arizona to visit his dying grandfather, a former Navajo Code Talker, he knows he has disappointed his hero grandfather. He buries himself one more time in the arms of a stranger before going back to Northern California.

Luci Tohe teaches at a reservation school, safeguarding the health of her ailing mother and little sister’s future, her own life on hold. She doesn’t expect the young Dine warrior she meets to be anything but a distraction from her loneliness. Danny decides to join the Navy, as a SEAL, becoming the man he knew he was destined to be. Before deployment, he goes back to visit the girl he cannot get out of his mind. A dangerous human trafficking element threatens Luci and her family. Danny vows to protect them all.

Available for purchase at

Enjoy this NOT PG excerpt from SEAL’s Code narrated by J.D. Hart

NYT and USA/Today Bestselling Author Sharon Hamilton’s SEAL Brotherhood series have earned her Amazon author rankings of #1 in Romantic Suspense, Military Romance and Contemporary Romance. Her characters follow a sometimes rocky road to redemption through passion and true love. Her Golden Vampires of Tuscany earned her a #1 Amazon author ranking in Gothic Romance.
A lifelong organic vegetable and flower gardener, Sharon and her husband live in the Wine Country of Northern California, where most of her stories take place.

You can find Sharon at