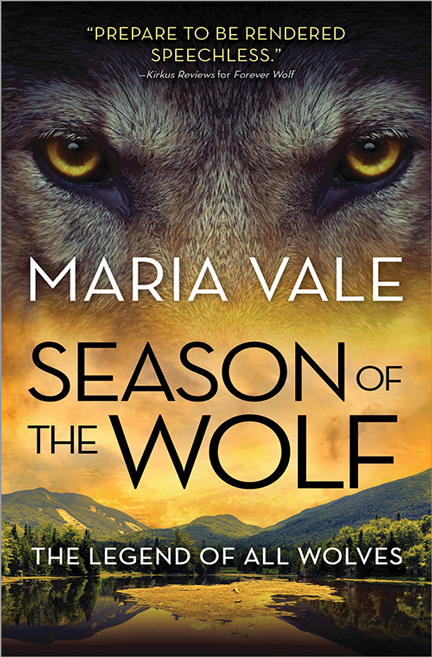 Season of the Wolf by Maria Vale.

As Alpha of the Great North Pack, life is never easy for Evie Kitwanasdottir. The Pack has just survived a deadly attack, and Evie is determined to do whatever is necessary to preserve their safety—especially from the four Shifters who are now their prisoners.

Constantine lost his parents and his humanity on the same devastating day. He has been a thoughtless killer ever since. When Constantine is placed under Evie’s watchful eye, he discovers that taking directions and having a purpose are not the same thing…

Season of the Wolf

In a world of danger and uncertainty, the Alpha can never let down her guard…

As Alpha of the Great North Pack, life is never easy for Evie Kitwanasdottir. The Pack has just survived a deadly attack, and Evie is determined to do whatever is necessary to preserve their safety—especially from the four Shifters who are now their prisoners.

Constantine lost his parents and his humanity on the same devastating day. He has been a thoughtless killer ever since. When Constantine is placed under Evie’s watchful eye, he discovers that taking directions and having a purpose are not the same thing.

Each moment spent together brings new revelations to Constantine, who begins to understand the loneliness of being Alpha. He finds strength and direction in helping Evie, but there is no room for a small love in the Pack, so Constantine will strive to prove to Evie he is capable of a love big enough for the Great North Pack itself.

“You know what I wished for on your eyelash?”

I take a deep breath and launch myself into the void. “I wanted to understand how wolves flirt.”

“It’s the things you say and do to show that you’re interested but want to pretend you aren’t in case the other person isn’t and you don’t want to be embarrassed.”

She scratches the tip of her nose with her thumb. “That’s why it’s one of the eight primary forms of human misrepresentation.”

“Yes there are,” she says and starts counting off on her fingers. “JAFFEWIP. It stands for Jokes. Advertisement. Falsehood. Flirtation. Exaggeration. White lies. Irony. Politics.” And as the last long finger rises in the air, I find myself unable to argue with a single one.

“Flirtation is only taught in Advanced Human Behaviors so that wolves heading Offland will understand how to interpret obscure signals.”

“I was never going to be an Offlander, so I have no idea.”

A squirrel runs through the branches overhead, loosing a sprinkling of duff. She picks up a branch of long, brown pine needles and twirls it between her fingers.

“Will you tell me?” she asks quietly.

The single light in the Great Hall goes off and I try to collect my thoughts.

“If you were human, Alpha, I would accidentally stand closer than strictly necessary with my back straight so you could see how tall I was. With my shoulders back so you could see how broad they are. I would smile at you, but not a friendly smile, more a smile verging on disdain, so that if you weren’t interested in my height or my shoulders, I would seem like I had never really cared in the first place.

“If you were interested, you wouldn’t say that straight out. Instead, you might ask me for help that you didn’t actually need, like opening a jam jar or working an app on your phone. I would help you with the thing you didn’t need with more flair and exertion than was required. Then with the jam jar opened or the app conquered, you might put your hand on my arm and say something about my strength or intelligence. I would then ask you where the nearest coffee shop is and you would say, ‘It’s easier if I just show you.’ When you’d shown me, I would insist on buying you a coffee. If you consented, we would have conducted a successful flirtation.”

She shakes her head, a small smile playing across her lips.

“Not a lie, a misrepresentation. As you said yourself.”

She waves her pine fan in front of her.

“When I asked for your help to swim like that, swim like you, did you think I was flirting?”

I know what she wanted. She wanted to find a place that was a little apart. Not run away, just float in the dark for the space of one breath, until some idiot thought it had gone on too long and rescued her, though she didn’t need it.

I shake my head.

“So how do wolves flirt?”

“It’s not all that different. At least until the hierarchy is settled, there are lots of feats of strength. Who drags the biggest windfall from the forest. Who kills the biggest bear. Who lifts the most bales of laundry. The usual. But then…” She leans toward me and I feel the warmth of her body behind me and stop breathing. The air moves behind my jaw, and when I suck in that breath again, the tight tip of her breast scrapes across my arm.

“That’s it,” she says quietly. “One wolf will smell another wolf to see if they are willing. That is how wolves flirt.”

When I turn my head, my cheek lines up to hers, and I suck in a deep breath. My brain is immediately awash with the almost indecipherable complexity of the Pack—black earth, fur, the blood of prey, the fast-running sap of summer trees. But then it settles on that something else underlying it all, the granite and moss, hard stone covered with fragile life, that is Evie.

“Yes,” she says, pulling away, her eyes shielded, voice suddenly distant. “But then every unattached male wants to cover the Alpha.”

MARIA VALE is a journalist who has worked for Publishers Weekly, Glamour magazine, Redbook, the Philadelphia Inquirer. She is a logophile and a bibliovore and a worrier about the world. Trained as a medievalist, she tries to shoehorn the language of Beowulf into things that don’t really need it. She lives with her husband and two sons in New York.