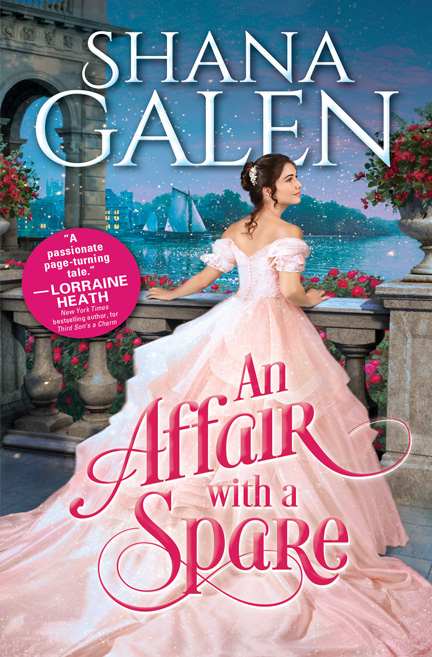 Shana Galen’s AN AFFAIR WITH A SPARE

He’s turned seduction into an art form…
Rafe Beaumont, fifth son of an earl, uses his irresistible charm with the ladies to glean dangerous war secrets. Now he’s putting those skills to the ultimate test: capturing an elusive assassin by seducing his daughter. The problem? She’s entirely immune to Rafe’s flattery. He’s turned seduction into an art form…
Rafe Beaumont, fifth son of an earl, uses his irresistible charm with the ladies to glean dangerous war secrets. Now he’s putting those skills to the ultimate test: capturing an elusive assassin by seducing his daughter. The problem? She’s entirely immune to Rafe’s flattery.

Never before has Collette Fortier met a man as attractive as Rafe. But her father’s life is at stake, and succumbing to Rafe would be disastrous. But when Rafe turns the tables on her, offering support and friendship instead of a fleeting affair, Collette finds herself tempted in ways she never could have imagined…

In this excerpt from An Affair With a Spare, former soldier and charmer Rafe Beaumont and spy Collette Fortier remove their figurative masks.

“Will you bring me here again?” she asked.

“Not if you object. I don’t enjoy standing about in cold gardens in the middle of the night, but it won’t be the worst hardship I’ve had to endure.”

She glanced about his flat, her eyes lingering on paintings and a few of the pieces he’d collected—vases, lamps, and other accoutrement. “It’s dangerous coming here,” she said.

“Because you think I will try to take you to bed?”

“Because I think you won’t.”

Rafe stared at her. Women did this sometimes. As well as he understood them, at times, they still managed to say something that flummoxed him. “I’m at sea here,” he finally admitted. “We are friends, nothing more.”

“And when I proposed something more, you were not interested.”

“I was interested. I simply did not think becoming your lover a good idea.”

He gave her a long look. “My ship is sinking.”

“That’s why you’re dangerous. Because you make me want what I cannot have.”

She laughed. “I thought you didn’t want me anymore.”

Where the devil had she acquired that notion? She was the only woman he did want. “How could I not want you? That has never changed. If you want to change your position on the matter…”

“No. I meant only to say you tempt me. Coming here tempts me.”

“Good. I like to know I’m not the only one tempted.”

She rose, and he did the same. She linked her fingers, looking nervously about.

“What would we do were we hedgehogs, Miss Fortier?”

“Would you approach me? Would I approach you?”

“The, uh, boar pursues the sow, attempting to mount her.”

“She will persistently reject his advances. A high percentage of observed hedgehog courtships do not result in cop-cop—”

“I do wonder what tempts a hedgehog.” Before she could answer, he moved closer and placed a finger lightly over her lips. “That was a rhetorical question.”

“I wonder what tempts you,” she said shyly. “Do I tempt you now?”

Washed in the golden firelight, she was lovelier than words. And Rafe knew a lot of words to describe women. With her glossy hair piled on her head and her cheeks tinged pink by the wine and the firelight, she looked young but regal. He dared not allow his gaze to dip lower than her chin. “Immeasurably,” he murmured.

She stepped closer, and he took her hand. It felt warm and soft in his, and he lifted it to his lips and kissed her knuckles. Then, turning it over, he placed a lingering kiss on her palm. Her dark eyes turned even darker when his mouth skated up her flesh to brush against the skin at the inside of her wrist. She must have dabbed scent here because, above the clean smell of her skin, he also detected the fragrance of juniper.

His mouth explored her sensitive flesh until he found her pulse, which fluttered rapidly. She might have pulled her hand away at any time. He held it with the lightest touch, but when he slid his lips higher to the tender skin at the inside of her elbow, she trembled. Rafe’s gaze never left hers when he flicked his tongue out and tasted her flesh.

She inhaled sharply. “You are very good at this, aren’t you?” she whispered.

“If my imaginings count, I’ve had extensive experience touching you.”

“Did you ever imagine kissing my lips?”

Her free hand wrapped around his neck, sliding into his hair. He straightened and she pulled him close.

When he released her hand to wrap his arms around her, she twined her arms about his neck and looked up at him. Rafe had never wanted to kiss a woman so badly. And he’d never feared doing so before. The last time he’d tried to kiss her, she had pushed him away. What if he kissed her now and frightened her? What if the kiss ruined the friendship, and she wouldn’t see him any longer? Draven would kill him, but even worse, Rafe would lose Collette.

“Kiss me,” she said when he hesitated.

“Are you certain this is a good idea? I don’t generally kiss my friends.”

“Surely you can make an exception for me.”

“Surely.” He bent closer, then pulled back again. “But should I? This might change everything, and I do value our friendship.”

“As do I.” She pressed closer to him, and the air caught in his lungs when her breasts pushed against his chest.

“Then we stay friends,” he said, voice choked.

“Friends who have shared a kiss.”

“Yes.” He brushed his lips over hers, then jerked back again. “That’s actually a new category of friendship for me. Should we discuss its parameters before we go on?”

She sighed, sounding suspiciously frustrated. “No. Just kiss me, Rafe.” But she didn’t wait for him to comply. Instead, she rose on tiptoe and took his mouth with hers. Her lips were soft and gentle but insistent. He couldn’t have refrained from kissing her back if he’d wanted. Kissing her was as necessary in that moment as breathing. And when her mouth became more insistent, he met her demands, kissing her deeper, holding her tighter, teasing her with his mouth until he felt her tremble. He trembled as well. He’d never reacted this way to kissing a woman before. He’d always enjoyed kissing women—some more than others—but he’d never

been so moved, never felt as though he needed a woman like he needed Collette.

“I think this is enough for now,” he said, pulling back.

She blinked up at him, her brown eyes almost black. “Really?”

He ran his thumb across the satin of her cheek, marveling at the silky flesh. “I think it’s for the best.”

“And I thought it best if we continue.”

That was a rather appealing idea as well. Who the devil cared about restraint and all the rest of that rot? She was in his arms and he wanted her and she wanted him…and if he took her, he might just ruin everything. Because he was not who she thought he was.

One Response to Shana Galen’s AN AFFAIR WITH A SPARE