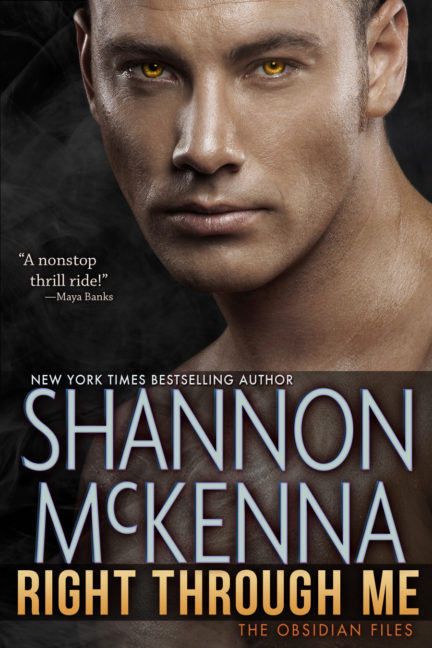 Celebrate the release of Right Through Me by Shannon McKenna!

NYTimes and USA Today bestselling author Shannon McKenna launches The Obsidian Files with RIGHT THROUGH ME, a pulse-pounding tale of thrilling suspense and searing passion. A beautiful fugitive and a biotech tycoon with strange powers must face the lethal rage of a vicious enemy bent on their annihilation. Biotech tycoon Noah Gallagher has a deadly secret: his clandestine training as a super-soldier gives him abilities that go far beyond human. Yet he’s very much a man. When Caro Bishop shows up at his Seattle headquarters with a dangerous secret agenda, his ordered life is thrown into chaos. Caro is a woman like no other—and her luminously sensual beauty cloaks a mystery he must solve.

Caro’s lying low, evading a false charge of murder. She means to clear her name, and she’ll do whatever it takes to survive—but seducing a man like Noah is more than she bargained for. His amber eyes have the strangest glow when he looks at her—she could swear he sees the secrets of her heart. The desire smoldering in Noah’s eyes awakens her own secret hunger, but Caro has to resist his magnetic pull. Anyone close to her becomes a target. The only right thing to do is run, far and fast, but Caro can’t outrun Noah’s ferocious intensity—or deny the searing passion that explodes between them.

Nothing else matters—until a vicious enemy bent on the ultimate revenge puts his murderous plan into play. Noah and Caro must battle for their lives…and their love…

“Look,” he said. “I promised not to touch you. I can’t keep that promise anymore.”

She drifted closer, a cloud of sunset colors. Her scent washed over his senses. His supercharged synesthesia translated her aroma into colors in his head. He wanted to strip her bare. His hands flexed with the impulse to seize her. It almost overcame him.

“You finished your dance. You said there could be nothing more. So go.”

“Shhh.” She stretched up, touching his cheek with soft, cool fingertips. Then, to his astonishment, she pressed a hot, soft kiss to his jaw.

“This is not helping,” he growled.

She rose up on her bare feet, her mouth near his. Never quite getting there. No kiss . . . just the caressing heat of her breath. The teasing promise of . . . maybe . . . almost.

He was so close to losing control, he didn’t dare inhale.

He stepped back. Not far enough. The sweetness of her perfume taunted him.

She didn’t move. Not one inch. She was enjoying this, feeling her power. It made his teeth grind, and his dick ache.

“I’m not ready to leave.” Her voice was a drifting whisper. “I like the way this makes me feel.”

“Yes. After hours. And we’re alone. More or less.” She closed the slight distance between them with a single step.

So she was seducing him. He got the message—but he still didn’t dare breathe.

Then she took his hand, and pressed it against her bare belly.

They both inhaled sharply. She was flower-petal smooth against the hard, callused skin of his palm. A flash of hot lust pumped through him.

A swift, shocked ripple went through her, as if she’d had a small orgasm, and then her hand fastened over his, holding it firmly in place. As if she welcomed the touch but didn’t dare allow his hand to wander elsewhere.

Her fingers tightened on his hand.

“I asked for a service, you provided it, I paid you,” he said stubbornly. All business. Meeting over. Too bad his dick didn’t get the memo. He was about to explode.

Without saying a word, she turned and headed to the bathroom, purple veils fluttering behind her.

He didn’t have to wait for her to return. But he knew that he would.

She was back minutes later, wearing jeans and a baggy black T-shirt. His exotic dancing maiden was gone but she was as beautiful as ever. Her real hair was a thick, curly dark cloud, caught up in back in a tousled knot of twisted ringlets. Some of them dangled around her face.

“It’s OK. Not your fault.”  She looked down at herself. “I thought it was better to have this conversation in street clothes,” she said. “To see if the fantasy melted away for you without the props. Better for both of us to know right now.”

He looked her up and down. Blood roared in his ears. “That’s not happening.”

Her sig pulsed, excited pinks and reds. “So?”

“I promised not to touch you, and I broke that promise. With your help.”

“If you stay here, I’ll break it again. Let me put that right out in the open.” Shannon McKenna is the NYT and USA Today bestselling author of fifteen action packed, turbocharged romantic thrillers, among which are the stories of the wildly popular McCloud series. She’s also the author of the upcoming OBSIDIAN series, the first of which, RIGHT THROUGH ME, comes out in July of 2016. She loves tough and heroic alpha males, heroines with the brains and guts to match them, villains who challenge them to their utmost, adventure, scorching sensuality, and most of all, the redemptive power of true love. Since she was small she has loved abandoning herself to the magic of a good book, and her fond childhood fantasy was that writing would be just like that, but with the added benefit of being able to take credit for the story at the end. The alchemy of writing turned out to be messier than she’d ever dreamed, but what the hell, she loves it anyway, and hopes that readers enjoy the results of her alchemical experiments. She loves to hear from her readers.