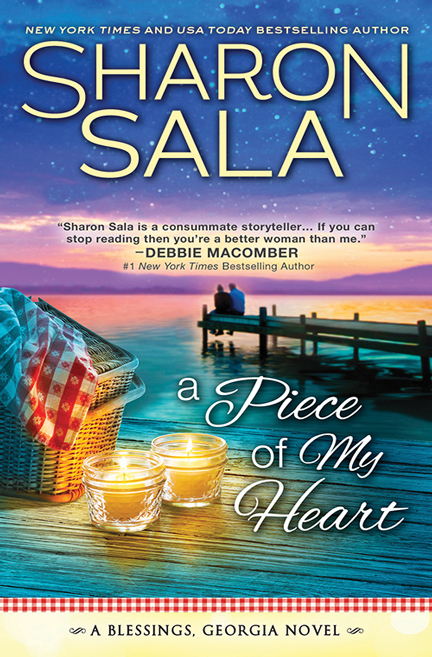 A PIECE OF MY HEART by Sharon Sala.

Growing up in a troubled foster home, Mercy Dane knew she could never rely on anyone but herself. She’s used to giving her all to people who don’t give her a second glance, so when she races to Blessings, Georgia, to save the life of an accident victim, she’s flabbergasted when the grateful town opens its arms to her. She never dreamed she’d ever find family or friends—or a man who looks at her as if she hung the stars. She’s never had a home
Growing up in a troubled foster home, Mercy Dane knew she could never rely on anyone but herself. She’s used to giving her all to people who don’t give her a second glance, so when she races to Blessings, Georgia, to save the life of an accident victim, she’s flabbergasted when the grateful town opens its arms to her. She never dreamed she’d ever find family or friends—or a man who looks at her as if she hung the stars.

Until she finds peace in his arms
Police Chief Lon Pittman is getting restless living in sleepy little Blessings. But the day Mercy Dane roars into his life on the back of a motorcycle, practically daring him to pull her over, he’s lost. There’s something about Mercy’s tough-yet-vulnerable spirit that calls to Lon, and he will do anything in his power to make her realize that home isn’t just where the heart is—home is where their heart is.

It was nearing daylight when her cell phone began to ring. She rolled over and grabbed it as she turned on the lamp. “Hello?”

“This is Mildred Starks from the National Rare Blood Registry. Am I speaking to Mercy Dane?”

“Yes,” Mercy said, as she threw back the covers and stood up.

“Ms. Dane, we have an emergency in your area. This is an unusual situation, and we’re asking something out of the ordinary. Can you respond directly to the hospital in need?”

“Yes. Where do I need to be?” she asked, as she began grabbing clothes.

“You still reside in Savannah, Georgia, and are there at this time?”

“Perfect. There is a small town about an hour south of you called Blessings. There’s no chopper available to fly you there and no time to donate in Savannah and then have it transported. Do you have transportation to get yourself to Blessings?”

Now her hands were shaking as she realized the reality of someone’s life would lie partially in her ability to get there. “Yes. Where do I go?”

“The town is small. There’s only one hospital. I’m sending GPS directions to your phone. Time is crucial. Be safe and Godspeed.”

“On my way,” she said, and dropped the phone on the bed as she took her biker gear out of the closet. Within five minutes she was out the door, her helmet in one hand, keys in the other.

The sun was only a hint on the eastern horizon as she left the complex. According to her directions, she was to take I-16 west, then connect to I-95 south. She wasn’t far from a feeder road that would take her to I-516, which then turned into I-16, so she took that route.

It was early Christmas morning and traffic was sparse. Sunrise was minutes away when she finally hit I-16, and by that time she was flying. Every mile behind her put her closer to Blessings. It wasn’t the first time she’d been called upon to donate her blood, but it was the first time she’d been asked to go to the person in need. It amped the urgency to a fever pitch, making her part in it personal.

Once she hit I-95 southbound, the northbound lane was a black ribbon of flickering headlights, while she and the Harley became a two-wheeled version of earthbound flight.

She rode with single-minded focus, keeping an eye on the traffic while making sure she didn’t get caught in the draft of passing truckers. And when the new sun was just high enough in the east that she could see the landscape through which she was passing, the glimpses of houses led her to imagining what might be going on within the walls—because it was Christmas Day.

Surely joyful families were opening presents and eating breakfasts. She pictured turkeys already in the oven, pies already baked and lining sideboards and tables, and the dough for homemade hot rolls in big crockery bowls, covered and rising in a warm place on the counter. Unfortunately, that scene was nothing but her imagination because she’d never experienced anything like it. But the closer she got to Blessings, the more she realized there was no time to dwell on what she didn’t have. Today, it was what she did have—an RH negative blood type—that mattered most.

She’d been on the interstate forty-five minutes when she reached the exit that would take her to her destination. According to the directions she’d received, Blessings was less than fifteen miles ahead. The roar of the engine beneath her was all she could hear as she leaned slightly forward into the ride and accelerated.

And just as she rode past the city limits sign, she came upon a roadblock and a long line of cars blocking the highway with rescue vehicles up ahead. Her heart sank. She didn’t know it was the aftermath of the wreck that had caused the injuries to the person in need of her blood. But waiting around for permission to pass was not on her agenda.

She rolled out around the last car in line and kept moving forward. When she reached the accident site, she rode around two tow trucks, then took to the ditch to get around a couple of police cars and one highway patrol.

Although she couldn’t hear what they were saying, she saw them shouting and trying to wave her down. She’d never outright defied a lawman in her life, but these were extenuating circumstances, and so she kept moving until she was beyond the roadblock and heading into town.

She knew she was speeding, but traffic on Main Street was almost nonexistent. Her gut knotted when she heard a siren. One glance in her side mirror, and she saw the red and blue flashing lights of a cop car coming up behind her. Stopping to explain her situation could be the difference between someone living and dying.

Led by fear, she swerved off Main Street into a residential neighborhood and accelerated. It wasn’t enough. The cruiser was still behind her and closing the gap. Then she noticed an alley coming up on her right, swerved into it and sped up, trying to get back to Main. Everything in her peripheral vision was a blur, and the sound of the siren was fading as she shot back onto Main and then down to the far end of the street to the blue hospital sign with an arrow pointing east.

It had taken an hour and five minutes to get there.

It was thirty-seven degrees, and she was sweating.