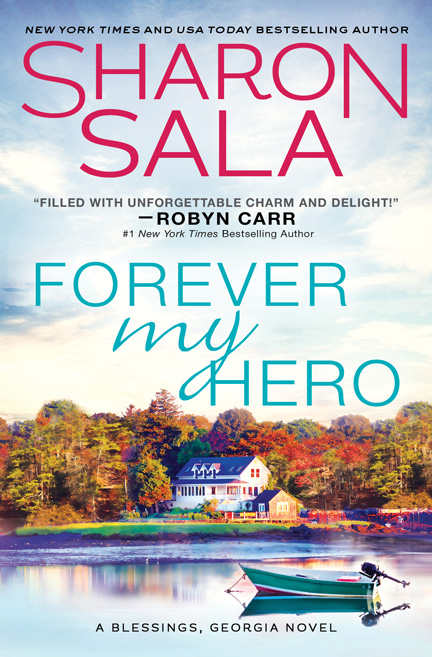 “Sharon Sala is a consummate storyteller.”—DEBBIE MACOMBER, #1 NYT Bestselling Author for A Piece of My Heart

In Sharon Sala’s FOREVER MY HERO, Dan Amos lost his wife and son years ago, when they inadvertently got in the way of a death threat meant for him. He’s never had eyes for anyone since, and he doesn’t want to. But fellow Blessings resident Alice Conroy sparks something inside him…

Every storm they’ve weathered…has led them to each other

Dan Amos lost his wife and son years ago, when they inadvertently got in the way of a death threat meant for him. He’s never had eyes for anyone since, and he doesn’t want to. But fellow Blessings resident Alice Conroy sparks something inside him…

Newly widowed, Alice was disillusioned by marriage and isn’t looking to fall in love anytime soon. Then a tropical storm blazes a path straight for the Georgia coast, and as the town prepares for the worst, Dan opens his heart and his home. The tempest is raging, but Alice and Dan are learning to find shelter…in each other.

School was officially out for the day, and parents were standing outside their cars, making sure they were in plain sight today so that their children would not be afraid.

Dan was on his way back to his truck when Alice got out. She waved at him, then stood out on the sidewalk so Patty could see her. She would be looking for their car, not Dan Amos’s truck.

Dan jogged over to where she was standing and tossed his crowbar into the truck bed.

“You were amazing,” Alice said. “I was afraid you would get hurt, too.”

He grinned. “It appears I haven’t lost my roping skills.”

Alice’s eyes widened. “I thought you were a lawyer before you came here.”

“I was once, but I grew up on a ranch in Texas. My parents still live on it, but both of my brothers run it now. When we were kids, we all worked the ranch,” he said.

“So I guess you ride horses, too?” she said.

Grinning, Dan pointed to his boots and belt buckle. “Yes, ma’am. This stuff’s not for show.”

Alice laughed and then heard the bell ring and turned toward the school. Within moments, kids began emerging through the front doors. “Here they come,” she said.

Dan was still trying to get past how her laugh made him feel when the children began coming outside. To his surprise, there was actually a kind of order to their exit. Teachers walked with part of the students toward buses, while other teachers walked with the in-­town riders. He was wondering who would be driving the injured driver’s bus when he saw a man come jogging out behind some of the kids and head that way.

“We’ll fix that,” Dan said, and once again, he picked Alice up by the waist and swung her up and into the truck bed. Now she was heads above everyone. “Wave! She’ll see you,” Dan said.

Alice’s heart was hammering as she turned and waved, and then kept on waving until suddenly Patty saw her, smiled, and waved back.

“Ready to get down?” he asked.

This time, he let the tailgate down and then held out his arms. She sat down on the tailgate, then he lifted her off and set her on her feet.

“We should have driven my car. Then you wouldn’t have to be helping me up and helping me down,” she said.

“What’s the fun in that?” he asked, grinning as he set her back into his front seat.

She was a bit taken aback by the teasing, then laughed. Moments later, they began moving up in line along with everyone else. Within a couple of minutes, they were at the loading zone. Dan jumped out and opened the back door of his truck.

“One more Conroy girl to load up, and then we’re good to go,” he said as Patty came running.

As soon as she was buckled in the back seat, she started talking.

“Mama, a girl named Shirley threw up on teacher’s shoes at lunch. I got a happy face on my workbook page and skinned my knee at recess! Did you know there were mean dogs at our school? Will they come back? I might be a’scairt tomorrow.”

Dan was grinning. “Does she ever stop to take a breath?”

“Rarely,” Alice said, then turned around to look at Patty. “Good for you for getting a happy face. That makes Mama’s face happy, too. We did know about the dogs. Mr. Amos saw the dogs and ran to help the bus driver. He stopped the dogs, and the police came and took them away. You don’t have to be scared about anything, okay?”

“You’re welcome, Patty.” Then he glanced at Alice. “Do you need anything before I take you home?”

“Okay then,” he said, and turned left at the stop sign by the school.

“Mama, is Charlie gonna have to walk home by himself? Won’t he be a’scairt, too?”

Alice shook her head. “Charlie walks home every day, and no, he won’t be scared. Charlie is a big boy, remember?”

Dan smiled as he drove, enjoying the little girl’s chatter and Alice’s calm demeanor. He was actually disappointed when he reached their house and pulled up into the driveway.

“Well, ladies, you’re home. Alice, if you will bear with me one more time, I’ll help you two out and see you to the door like the gentleman my mama raised me to be.”

He circled the truck, helped Alice down first, and then Patty. Once Patty’s feet touched the ground, she was running toward the house and already on the porch, airing her cheerleader skills by running from one end of the porch to the other, cheering as she went.

Dan laughed out loud at the surprised expression on Alice’s face.

“Is that even possible?” he asked, as he helped her up the steps. “House key?”

She handed it to him. “It’s the one with the pink nail polish on it, remember?”

“Got it,” he said, unlocked the front door, and then stood back out of the way as Patty danced through the doorway and into the house. Dan was still grinning as he dropped the key ring into Alice’s palm. “It has been a pleasure to spend this time with you and your mini me, Ms. Alice. Maybe we could do this again sometime when there’s nothing else calling your attention.”

Alice was so shocked by the invitation that she forgot to answer.

Dan hesitated. That wasn’t the response he was hoping for. “Uh…so, is that a silent yes, or a silent no?”

His heart skipped a beat. Here he was, wanting to kiss her again. He settled for a touch on her forearm. “Take care of that hand,” he said, and left before he made a bigger fool of himself or she changed her mind.

He was on his way home before the shock of what he’d done finally hit. “I cannot believe I asked her on a date.” He drove a whole block farther. “I can’t believe she said yes,” he added. He got home and all the way inside his house with one last question yet unasked. Was tomorrow too soon?

SHARON SALA has over one hundred books in print and has published in five different genres. She is an eight-time RITA finalist, five-time Career Achievement winner from RT Book Reviews, and five-time winner of the National Reader’s Choice Award. Writing changed her life, her world, and her fate. She lives in Norman, Oklahoma. Visit her on the web at sharonsala.net.