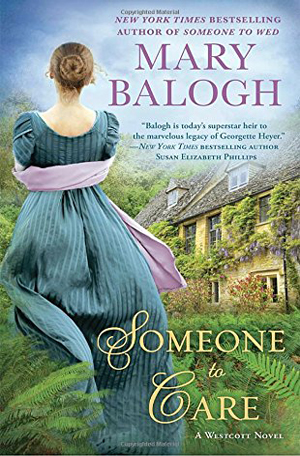 Someone to Care by Mary Balogh.

Once the Countess of Riverdale, Viola Kingsley throws all caution to the wind when adventure calls in the form of a handsome aristocrat.

Two years after the death of the Earl of Riverdale, his family has overcome the shame of being stripped of their titles and fortune–except for his onetime countess, Viola. With her children grown and herself no longer part of the social whirl of the ton, she is uncertain where to look for happiness–until quite by accident her path crosses once again with that of the Marquess of Dorchester, Marcel Lamarr.

Marcel Lamarr has been a notorious womanizer since the death of his wife nearly twenty years earlier. Viola caught his eye when she herself was a young mother, but she evaded his seduction at the time. A prize that eluded him before, she is all the more irresistible to him now although he is surprised to discover that she is as eager now for the excitement he offers as he is himself.

When the two defy convention and run away together, they discover that the ties of respectability are not so easily severed, and pleasure can ensnare you when you least expect it…

An excerpt from SOMEONE TO CARE by Mary Balogh

It felt like a lifetime. Or like something from another life altogether. But here he was, fourteen years older and fourteen years more attractive, though there was a greater hardness now to the handsome, austere features. She wondered, as she had wondered at the time, why he had taken her literally at her word. He did not seem like a man who took kindly to being told no. But she had told him to go away and he had gone. His feelings for her, of course, had not run more than skin-deep. Or groin deep, to be more blunt about it. And there had been plenty of other women only too happy to jump to his every command.

“I stand corrected,” he said in that soft voice she remembered well. He had never been a man who needed to raise his voice. “Was there a time limit?”

How did one answer such a question? Well, with a simple no, she supposed. There was no time limit. She had sent him away and had intended that it be forever. But here she was alone in a room with him fourteen years later, and he had spoken to her again and asked a question. He did not wait for the answer, though.

“Now how am I to interpret your silence?” He strolled to the table nearest the door, pulled out a chair, and sat on it, crossing one elegantly booted leg over the other as he did so. “Having sent me away once, you have nothing more to say to me? But you have already said something. You have corrected my defective memory. Could it be, then, that you hate to repeat yourself by inviting me yet again to go to the devil? Or could it be that you do not wish to admit that company—any company, even mine—is preferable to none at all when one is stranded in a godforsaken village somewhere in the wilds of England? I assume you are stranded and have not come here with the express purpose of jollificating with the locals and helping save them from being rained upon on Sunday mornings?”

The mere sound of his voice sent chills up her spine. Just because it was so soft? And because he spoke unhurriedly, with the absolute certainty that no one would dream of cutting him off?

“If it is not,” he said, his eyebrows lifting, “then it ought to be. Perhaps I should give serious consideration to writing a dictionary. What do you think? Do you believe it would rival Dr. Johnson’s?”

“Ah, but you do me an injustice,” he said. “I could think of ten words without having to frown in thought and pummel my brow. But why is it you will not answer a direct question? Was there a time limit? And are you stranded? All alone?”

“The axle of the carriage in which I am traveling came perilously close to breaking,” she said. “The coachman does not believe we will be able to resume the journey until tomorrow morning at the earliest.” Why was she explaining?

“I took a glance out into the innyard before stepping in here,” he said. “There is no sign of a private carriage. Has yours by chance made off without you, the imperiled axle story just one big hoax to be rid of you? But that is unlikely, I must admit. You did not—surely—arrive here in that apology for a conveyance that is listing hard to the northwest and looking for all the world as though it will not be fit to go anywhere for the next eternity or two. Or did you? A hired carriage, Lady Riverdale?”

“That is no longer my name,” she said.

“How are the mighty fallen?” she said. “Was that your meaning, Mr. Lamarr? Then why not say so?”

Long, elegant fingers closed about the handle of his quizzing glass, but he did not raise it to his eye. “Riverdale was a blackguard,” he said. “If it was your idea to completely disassociate yourself from him, even in name, then I congratulate you. You are better off without the connection. Kingsley is your maiden name, I assume?”

She did not answer. She looked down at her coffee in order to break eye contact with him. There was still half a cup left. It would be cold by now, though. Besides, she was not sure her hand would be steady enough to lift the cup without revealing her agitation.

“Miss Kingsley,” he said after a few moments of silence had passed. “Are you going to send me away again? And spend the rest of the day alone?”

Our review is coming soon!