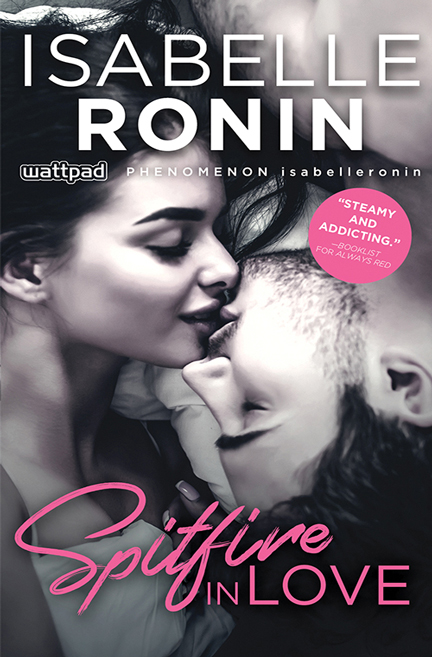 From the International Phenomenon with over 200 Million Reads on Wattpad

Kara Hawthorne never backs down, especially when it comes to protecting her family.

Cameron St. Laurent isn’t intimidated by the feisty woman at his doorstep. And when she asks him for the impossible, Cameron knows just how to sweeten the deal…

The two combustible personalities are faced with unavoidable off-the-charts chemistry. But when Cam’s dark past shows up, he’ll have to slay his demons and lay himself on the line to win Kara, body and soul. She’s never at a loss for words.

He’s determined to have the last one.

There he was with his piercing blue eyes and Lucifer black hair.

He was leaning against the wall, a lollipop in his mouth, hot as hell and twice as dangerous.

Kara Hawthorne never backs down, especially when it comes to protecting her family.

She looked so soft, harmless, like a pretty kitten, but she was as safe as a ticking time bomb.

Cameron St. Laurent isn’t intimidated by the feisty woman at his doorstep. And when she asks him for the impossible, Cameron knows just how to sweeten the deal…

The two combustible personalities are faced with unavoidable off-the-charts chemistry. But when Cam’s dark past shows up, he’ll have to slay his demons and lay himself on the line to win Kara, body and soul.

Slowly, I stepped toward her. Her eyes were wide, watching my every move. The pulse on her neck was pounding.

“You want me to be your experiment?”

“What do you have in mind for me?” I whispered.

I placed my hand on the soft skin of her neck, gently stroked the side of it with my thumb. “I might say yes if you tell me.”

She closed her eyes, her muscles relaxing and her body swaying softly toward me. I wrapped an arm around her waist to support her.

“How about I make you a deal?” I continued. She smelled of peaches. Ripe, sweet peaches. “You said your brother doesn’t have insurance. See, you shouldn’t have told me that. Now I’ve got an ace.”

Her eyes flew open. She slammed her hands on my chest and pushed me away.

I stepped back. “You’re too honest for your own good.”

She scoffed. “Oh, believe me when I say that I’m not!”

“What do you want?” she spat it out. Her stance was confrontational, her voice dripped with venom.

If she thought that would turn me away, she was mistaken. I wanted more of it.

I leaned against the counter, reached for the cup of coffee she’d made for me. “If I go to my insurance, my bike will be fixed.”

“But you’re going to have to cough up your deductible—”

“I can pay for my deductible easily. And I can take it to the mechanic who’s been servicing my motorcycle for years. Why should I go to a shop that I have no idea if they’ll do a good job or not?”

If looks could kill, I’d be decapitated by now.

“Have you heard of subrogation? My insurance will go after your brother. It’s also a hit-and-run. The police will be very interested.”

I gave her a moment to absorb that. Then I said, “So now that we know where we both stand, let’s make a deal.”

I took a sip and very nearly choked. It was too strong. When I saw her face, I knew she’d deliberately made it undrinkable.

This girl would cut me off at the knees without batting an eye. Why did that excite me?

“First, tell me why you’re doing this for your brother.”

She crossed her arms in front of her. “I don’t need to tell you dick.”

My mouth twitched. “Tell me why the hell he isn’t owning up and paying for his mistake.”

“You’re not going after him for this. If you do, I’ll castrate you.”

“I like putting them in action too. Try me and you’ll find out.”

“Oh, I think I want to. I’m looking forward to it.” To prove it, I took another sip of her coffee without breaking eye contact with her. “Tell me where he is.”

“I’m not going to hurt him. Don’t you think he owes me an apology? Or do you think that’s too much to ask?”

She opened her mouth, closed it. Sighed. “No,” she said, capitulating. “It’s not too much to ask. He went fishing with my dad.”

“So…” I looked at her lips. Her bottom lip was fuller than the top. I moved my gaze up and met hers. “You’re alone with me.”

She narrowed her eyes. “Yeah. And no one would know who murdered you when I hide your body in the shed.”

I paused and threw my head back laughing.

I paused. There was something about her expression that told me she wasn’t feeling as firm on this as she sounded. “Girls?”

“Never had a boyfriend?”

“Never met anyone who measured up.”

“Tell me what they are.”

“You’re playing with me.”

She let out a huff and walked to the living room. “Let’s talk about this deal so you can leave. I have a very busy day.”

“Sure.” I poured the coffee in the sink and rinsed the cup before following her to the living room. I sprawled on the couch. She leaned against the wall opposite me, eyeing me warily.

“That’s my dad’s bed. Feel free to soil it or anything.”

The house looked like it had two bedrooms and a bathroom. The two rooms must be for her and her brother.

“I like sleeping on the couch too,” I said. I stopped for a moment. I hadn’t meant to tell her that.

She gave me a bored look. “What’s the deal?”

I looked her directly in the eye. “Give me a ride.”

“Until my motorcycle is finished to my satisfaction, you’re going to drive me where I need to be. Not your brother. Not your best friend. You.”

“Have you lost your mind? What, do you think I have all the time in the world?”

“Since I saw you trying to break into my house last night, I’m going to have to say yes.”

“You have a mint truck in your driveway! That’s yours, isn’t it?”

It was the company truck assigned to me, which would make what I said technically a lie, but I couldn’t let her know that or she would never agree.

“Are you paying for it?”

“You make it so easy. Rule number one: don’t expose your weakness to the enemy.”

“Wanna find out?” I stood up, walked toward her.

She stood her ground. Unflinchingly.

“If I do this, you’ll let my shop fix your motorcycle? You won’t file a claim with your insurance?”

I want to know what your lips taste like.

“No accessories,” she added.

“And no maintenance,” she finished.

She’d drive me to bankruptcy if she could. And laughing while she was at it. She could shut me down and kick me out if she really didn’t want the deal, but some part of her was thriving on the tension between us. I could feel it in the way her body turned toward me, the way her eyes flashed with excitement, and the hint of a smile on her lips she tried to hide.

“The deal includes maintenance.” Before she could open her mouth to protest, I added, “But you can get out of it. Easily.”

I rubbed the stubble on my jaw. It was getting itchy. Time for a shave. I headed to the front door and put on my shoes. I opened the door, then tossed her my keys.