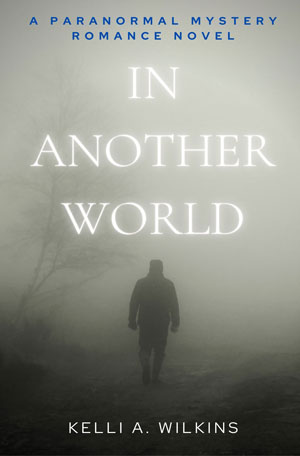 Eddie persuades Julie to contact his former partner, Lou Kaplonski, to ask him to reopen his case. Skeptical, Lou dismisses Julie as a fake—until she proves she can communicate with the dead—and he finds out Eddie has a lot to say…

Spotlight on… In Another World

A New Paranormal Mystery/Romance Novel by Kelli A. Wilkins

Today I’m sharing a look at the making of my new release, In Another World. This contemporary romance novel blends a murder mystery with the world of the paranormal. Here’s the book summary and links…

Eddie persuades Julie to contact his former partner, Lou Kaplonski, to ask him to reopen his case. Skeptical, Lou dismisses Julie as a fake—until she proves she can communicate with the dead—and he finds out Eddie has a lot to say.

Julie channels Eddie’s spirit and together with Lou, the unusual trio tracks down leads and follows clues to solve Eddie’s murder. The case takes them down a dark and dangerous path filled with secrets, where nobody can be trusted.

As they work to find his killer, Julie falls for Eddie. Funny, smart, and sexy, Eddie is the guy of her dreams—and he doesn’t look or act the least bit dead. To her surprise, Eddie discovers a clever way they can be together, and they begin an ethereal romance.

When Lou’s investigation brings him too close to the killer, his life and Julie’s are put in danger—and Eddie may be the only one who can save them.

In Another World has been a labor of love for many years. I’m thrilled that I finally finished the book, and now readers can enjoy the story and meet these very unusual characters I’ve created.

The book opens with Detective Eddie Mahoney, an undercover police officer, in a jam. His cover has been blown and he’s in the middle of nowhere with two criminals. Things don’t end well for Eddie, and although he doesn’t make it out of his predicament alive, his role in the book is just beginning.

Yes, you read that right. I killed off my main character—and the hero of the book—in the first few pages. Why? Because this isn’t your typical romance. Eddie is dead right from the start, but that doesn’t mean he can’t fall in love.

Next, readers are introduced to a headstrong woman named Julie Kershaw. She’s arguing with an unscrupulous used car dealer named Big Al. He sells her a car for cheap, and Julie is suspicious. Naturally, she wonders if there’s a catch, and there is. The car is haunted by… you guessed it—Eddie.

Eddie has been trying to communicate with the car’s previous owners, but never had any luck until Julie bought the car. At first, Eddie doesn’t realize that Julie is a psychic medium and can communicate with spirits. Once he knows she can see and hear him, Eddie uses his charms and persuades her to help him find his killer.

And so begins this unusual romance.

Most people would think this is a bit absurd. And maybe some readers will. But once you get drawn into the story and see that Eddie is pretty much like any other romantic hero (he just happens to be dead), the story flows along.

Lou is a great guy, and I loved writing for him. On the outside he appears to be a tough, no-nonsense detective who takes his job seriously. When he first meets (and interrogates) Julie, he acts like a typical “bad cop” and is very rough with her.

Lou doesn’t believe in ghosts and thinks all psychics are fakes. He’s also taken Eddie’s death personally. He feels like a failure because he couldn’t find his partner’s killer, and he is still working through his grief. Once Lou starts investigating with Eddie and Julie, his true personality comes out, and he’s more determined than ever to catch Eddie’s killer.

When I wrote the book, I had to make sure readers were able to follow the investigation along with Lou, even when Julie and Eddie weren’t present. I’ve never written a full-fledged mystery or detective story before, but I’ve watched enough mysteries and police dramas, so I think I got it right. (LOL) I also had the good fortune to be related to a police captain and was able to ask his advice on the “police stuff” in the story. The book is a hybrid of romance and mystery. Sometimes it takes on more of a police procedural/mystery feel than a romance, and then in other scenes with Eddie and Julie, it’s a traditional romance.

I hope mystery, romance, and paranormal readers will enjoy this unique novel. It’s got something for everyone: danger, humor, love, ghosts, and quirky characters. I had fun writing this book and stepping into another world, blending the living and the dead.

Stay tuned to future blogs to learn more about the book (where the original idea came from, my take on ghosts, psychics, and the paranormal, plus the overall theme of the book) and to read an exclusive excerpt.

Her latest novel, In Another World, was released in January 2022. This contemporary mystery/romance is set in the world of the paranormal.

In 2021, Kelli published Journaling Every Week: 52 Topics to Get You Writing. This fun and innovative guide to journaling is filled with hundreds of thought-provoking prompts designed to get you writing about your feelings and emotions.