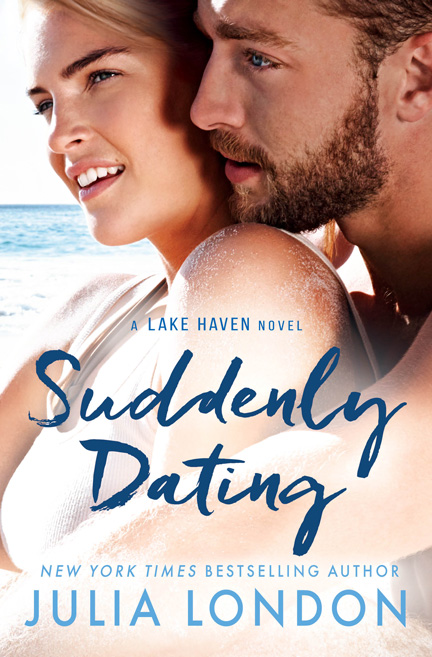 SUDDENLY DATING by Julia London… When it turns out that Harry’s and Lola’s friends are a divorcing, not-on-speaking-terms couple sparring over the same house, the strangers find themselves accidental (and reluctant) roommates for the summer. They agree to make the best of it, even posing as a couple to mingle among East Beach’s well-heeled crowd. But the ruse is starting to feel real—and romantic. Are they brave enough to reveal their feelings before the summer nights turn cold?

Harry pulled Lola’s hand free and twirled her out of his embrace, and then back again, and anchored his arm around her waist. Tightly.

Lola frowned at him. “I can’t breathe.”

Harry bent his head and murmured into her ear, “Are you afraid to be close to handsome me?”

“Yes, as a matter of fact. I’m afraid your ego will suck up all the oxygen in the area and I’ll suffocate.”

She smelled so fresh. She reminded him the way the air smelled in spring—crisp and fragrant. “If you’re going to date me, baby, you have to be close. A man likes to know his sex appeal is appreciated by the opposite sex.”

Lola smiled, lifted their clasped hands to her mouth, and bit him. “Stop calling me baby,” she said as he yelped. “You don’t need me to appreciate your sex appeal—you seem to be doing a fine job for everyone.”

“Your dating skills are awful, you know that?”

“That’s no surprise,” she said cheerfully. “I don’t really date.”

“What do you mean you don’t date? You’ve been divorced more than a year.”

Lola sniffed and shifted her gaze away from him. “Why is everyone always so concerned about who is dating who?”

Harry stopped their gentle swaying. “Lola, no way,” he said incredulously. “You’re not dating?” A dancing couple bumped into them at that moment, pushing Lola into him. He steadied her and cupped her face. “Seriously?” he asked.

Lola’s brows dipped into a vee. “My needs met?”

“You know. Needs,” he said. Harry didn’t trust himself to say more. But he was fascinated by the idea Lola hadn’t had sex in a year, and glanced down without meaning to. His gaze landed on her breasts.

Lola punched him on the arm. “Well that’s kind of personal.”

“I’m sorry,” he said instantly. “I’m just surprised. I can’t imagine going a year without it.”

She clucked her tongue at him. “Who said I was without?” Harry arched a brow.

Lola managed to worm her way out of his embrace. “So I guess you just jumped right into the sack the minute you cut your ex loose, is that it?”

“First of all, I didn’t cut Lissa loose. She dumped me. And second, it hasn’t been that long. I can go a couple of months before I start climbing the walls.”

“Well that’s just great,” she said, and tugged at her earlobe before folding her arms across her body.

They stared at each other. Harry’s gaze inadvertently drifted to her mouth. Those were lush lips, and he was reminded of that surprisingly sexy little kiss in the kitchen of the lake house. “You know,” he said, lifting his gaze to hers, “we could consider—”

“Don’t even say it,” she interjected, pointing at him.

She gave him a withering look. “I know exactly where you are going with this. You are going to suggest we become friends with benefits.”

That was absolutely what Harry had been about to suggest, but he wouldn’t admit it now. “I was going to say maybe we could consider putting you on Tinder for real. I could help you find the right guy. But if you’d rather just jump straight to friends with benefits, I’m okay with that, too.”

“I didn’t say that! Seriously, isn’t it time to go?” she asked, looking around.

Harry caught her hand, pulling her toward him.

“Leave me alone, Harry Westbrook,” she said, but she didn’t resist him pulling her into his embrace once more. He caught her face between his hands and touched his lips to hers. Gently. Sweetly. It was amazing how such a small and simple kiss could set him on fire, but it did—another conflagration, courtesy of Lola Dunne. Maybe because he felt her soften into him. Maybe because she tasted sweet. Maybe because he really liked this girl with her strange novel and messy cooking.

He lifted his head and murmured, “Just think about it.” If only Lola Dunne had the time—and the courage—she’d write her novel, and maybe even start dating again. When her friend offers the use of her summer home overlooking Lake Haven, Lola sees the chance to focus on herself for a change, and she eagerly accepts.

Engineer Harry Westbrook is waiting for his ship to come in. But it’s not happening soon enough for his girlfriend, who’s left him for good…again. To nurse Harry’s heartache, his pal extends an invite to his lake house in East Beach.

When it turns out that Harry’s and Lola’s friends are a divorcing, not-on-speaking-terms couple sparring over the same house, the strangers find themselves accidental (and reluctant) roommates for the summer. They agree to make the best of it, even posing as a couple to mingle among East Beach’s well-heeled crowd. But the ruse is starting to feel real—and romantic. Are they brave enough to reveal their feelings before the summer nights turn cold? Julia London is the New York Times, USA Today, and Publishers Weekly bestselling author of more than thirty romance novels. Her historical titles include the popular Desperate Debutantes series, the Secrets of Hadley Green series, and the Cabot Sisters series; her contemporary works include the Lake Haven, Pine River, and Cedar Springs series. She has won the RT Bookclub Award for Best Historical Romance and has been a six-time finalist for the prestigious RITA Award for excellence in romantic fiction. She lives in Austin, Texas.