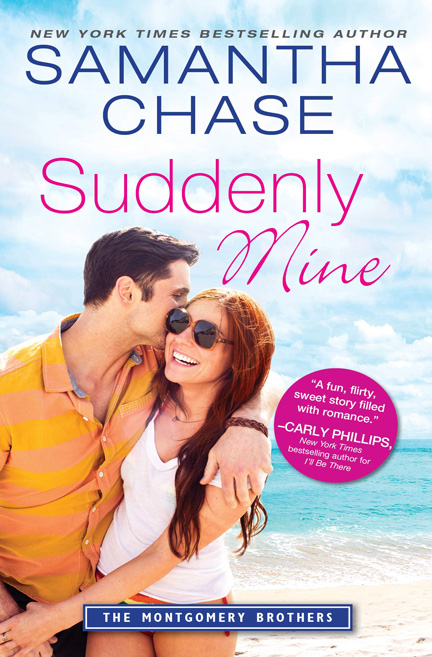 “Chase’s three-dimensional characters leap off the page…”—Publishers Weekly for Until There Was Us
“A sweet romance: classic, thoughtful, and as lyrical as the stars.”—Kirkus Reviews for A Sky Full of Stars
“Chase just gets better and better.”—Booklist

Love is a sanctuary

Christian Montgomery is burnt out—the family business might be his entire world, but his father’s judgment means Christian never stops working. His only respite is gazing at the beach and the carefree surfers riding the waves…especially the curvy redhead who’s caught his attention…

Love is a sanctuary

Christian Montgomery is burnt out—the family business might be his entire world, but his father’s judgment means Christian never stops working. His only respite is gazing at the beach and the carefree surfers riding the waves…especially the curvy redhead who’s caught his attention.

Sophia Bennington has just fled from her small Kansas town to California, where she’s trying her best to embrace her new beginning. Soon Christian and Sophia find one another, and it feels like sanctuary. But when their difficult pasts catch up to them, will they run away from each other?

Behind her, Christian laughed softly. “Yeah, I know. It’s a bit on the big side, right?”

“It’s practically a movie screen,” she said, looking over her shoulder and smiling at him.

He returned the smile.

Her heart quite literally skipped a beat.

Christian moved closer to sit on one of the sofas before motioning for her to take a seat as well. “So…you wanted to talk to me?”

Right now? Not really. There were some other things she’d like to be doing with him, but she noticed him looking at her expectantly, and that forced her to push all sexy thoughts of him aside.

With her purse on the sofa beside her, Sophie sat primly, hands folded in her lap. “First, how are you feeling?”

His smile faltered a little. “I’m doing okay. I’m bored out of my mind, but I’m being respectful of my doctor’s orders and not calling into the office or even checking emails. It’s a lot harder than I thought it would be. But on the plus side, I’ve been sleeping well and I’ve made some modifications to my diet that I’m not hating, so…all in all, I’m all right.”

“Good. That’s good.” He was still studying her and Sophie fought the urge to squirm under his appraisal.

Christian leaned forward, resting his elbows on his knees. “Was there something more?”

Why was she hesitating?

She cleared her throat and did her best to focus on…his forehead. “Okay, so here’s the thing—I got a call from Patricia today.” She waited for him to react, but he didn’t. “She called to give me my schedule.”

With a huff, she went on. “Then she told me how you’d called my bosses and recommended me to be hired by other companies in the building! I appreciate your confidence in me, but…”

“You don’t even know me, Christian,” she blurted out. “For all you know, I’m terrible at my job! I could be…lazy or have no bedside manner! Maybe I stink at taking blood pressures or—or make people cry when I give them a flu shot. I mean, you don’t have any idea!” She was breathless by the time she finished and sagged against the sofa cushions.

Without a word, Christian rose and walked to the kitchen. The entire space was open so the living room, dining room, and kitchen formed one large space and she was able to watch him pour her a glass of water. He handed it to her.

He sat on the sofa opposite hers. “First of all, you and I both know you’re excellent at your job. Anyone who was there with you that day in my office will attest to that.”

Blushing, she said, “We don’t know that.”

He laughed softly. “I disagree. And on top of that, from everything Patricia told me, you were the one my mother and aunt wanted to hire. The position was never going to anyone else.”

She took a sip of the water and placed it on the coffee table on top of a coaster. “And what about the other companies?”

“Everyone in the building talks, Sophie. We’re not the only ones looking to incorporate this kind of a health program. We were just the first to do it. And now that we have, it didn’t seem like a big deal to recommend your agency and you to them.”

“But I haven’t even started with your company yet.”

He simply shrugged. “Why are you arguing with me about this? You said so yourself, this was the perfect job for you.”

And it was. She knew that. But… “I feel like I may get any future jobs under false pretenses, or…something like that.”

Laughing softly, Christian relaxed and slung one arm along the top of the cushion. “No false pretenses, Sophie. You are more than qualified for the job and any others you may get. Patricia was talking to me about that when…well, you know.”

Nodding, she countered, “It’s not like I don’t appreciate this—because I do—but I don’t want the recommendations because you feel obligated or something.”

“Believe it or not, this has more to do with how much my mother and aunt loved you and raved about you.”

Her eyes narrowed as she tried to gauge whether or not she believed him. “Where are they, anyway? Do they live nearby?”

“My parents live in New York and my aunt and her family are in North Carolina.”

She looked at him quizzically. “But…they were here, right? I met them on the beach?”

“Do they visit often?”

He shrugged. “No. They were here to start up the whole corporate health thing. I guess I’m still surprised that they met you and how everything sort of worked out the way that it did?”

“At first I thought they were just being nice, but then I realized they were chatty by nature,” Sophie said, smiling.

“That pretty much is a perfect description of them.”

“Anyway, I wasn’t sure how to end the conversation so I could get back into the water, and ended up sitting with them for a while and sharing my life story.” She chuckled. “I don’t even know how that happened.”

“Because they’re crafty like that,” he said. “Trust me. They have a gift for drawing things out of people that they wouldn’t normally share.”

“That sounds a little ominous.”

He explained a bit of the dynamics of his family, his uncle’s penchant for matchmaking, and how they all ended up working for one another.

“No one tells anyone who they have to hire in this company,” he said matter-of-factly.

She gave him a hard glare at the irony of what he’d just said.

“What?” he asked, brows furrowed.

“And yet here you are hiring me because your mom and aunt told you to,” she stated, crossing her arms over her chest.

“It’s not the same thing, Sophie. Not at all. They hired your agency and requested you. I have nothing to do with any of this. Trust me.”

Leaning forward, he met her gaze. “Look, they are different situations. We are adding something new to the company and needed to hire someone. They were in charge of hiring that person. It’s not like they called me and said ‘Hey, you have to hire Sophie and find a position for her.’ So you see, two completely different things.”

She still felt like the two situations were very similar, but she’d be willing to let it go for now.

He let out a sigh of frustration. “Are you always this argumentative? Because I’ve got to tell you, it’s exhausting.”

“Sorry,” she murmured. “And honestly, I’m not. I usually have better manners than this. I’ve never argued—even lightly—with anyone, especially not someone I work with!” And that’s when it hit her: she was going to be working with him. What was she thinking, coming here and arguing with him like this?

Standing quickly, she grabbed her purse and stepped toward the door. “I should go,” she said, suddenly feeling awkward and uncomfortable. “I’m glad you’re feeling better, and I’m sure I’ll see you at the office next week.”

Moving nervously, she made her way to the door.

Christian’s hand on her arm stopped her. When she turned, she saw confusion in his deep blue eyes.

“I—I just remembered someplace I need to be,” she lied and immediately felt guilty for that too.

His eyes scanned her face, but his hand gently curled around her arm. “Really? Just like that? Without looking at your watch or anything, you suddenly remember that you have somewhere else to be?”

She bit her lip before saying, “Uh-huh.”

A slow smile played at Christian’s lips. “Where?”

Why couldn’t he just let her go? Why was he questioning her like this? “What—” she croaked and then cleared her throat. “What difference does it make? I needed to clear things up and I did, so…”

She rolled her eyes. The man was infuriating.

That last one hit her when she went to move and somehow ended up even closer to his bare chest.

Licking him would definitely be wrong, right? And more than likely, a little inappropriate.

It didn’t stop her from wanting to do it, though.

One Response to Suddenly Mine by Samantha Chase