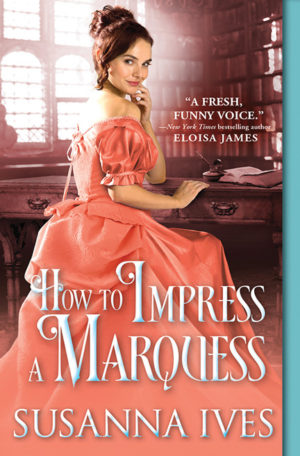 Susanna Ives: I didn’t title my book. I just called it “book” or “that &*%$! book” during its writing. My publisher came up with the catchy HOW TO IMPRESS A MARQUESS. However, for the first third of the book, my heroine, Lilith Dahlgren, couldn’t care less about impressing George, Marquess of Marylewick, and told him as much on numerous occasions. Hmmm, so maybe that should be my first “way” to impress the marquess.

5 Ways to Impress a Marquess STIR in a sensational serialized story that has society ravenous for each installment.

COMBINE with ambitious guests at an ill-fated house party hosted by a treacherous dowager possessing a poison tongue.

SHAKE until a stuffy marquess and rebellious lady make a shocking discovery: the contents of their hearts are just alike.

Susanna Ives started writing when she left her job as a multimedia training developer to stay home with her family. Now she keeps busy driving her children to various classes, writing books, and maintaining websites. She often follows her husband on business trips around Europe and blogs about the misadventures of touring with children. She lives in Atlanta.