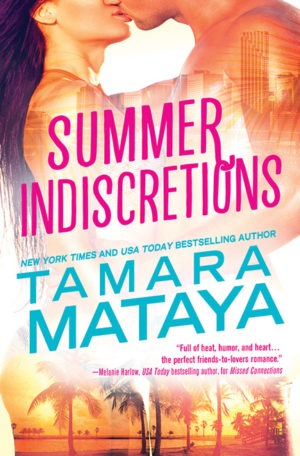 One email away from a total meltdown, I’m desperate to escape New York. Using Switch—a website designed to help strangers swap homes for the summer—I slip out of my stilettos and into a string bikini. But of all the beaches in all the world, Blake Wilde just had to show up on mine. He’s hot. Scorching hot. And he’s been strictly off-limits for as long as I can remember. One email away from a total meltdown, I’m desperate to escape New York. Using Switch—a website designed to help strangers swap homes for the summer—I slip out of my stilettos and into a string bikini. But of all the beaches in all the world, Blake Wilde just had to show up on mine. He’s hot. Scorching hot. And he’s been strictly off-limits for as long as I can remember.

To hell with that. New life? New rules.

I know something this good can’t be made to last. But for three sizzling weeks, I can pretend there won’t be consequences, recriminations, or regret… And that somehow our growing connection can be more than just a summer fling.

This book is set in Miami, so I wanted songs to bring the heat, but also give me something to groove to. Fun, flirty, sexiness, and nothing too dark. I definitely listened to some more than others, but they all got their turn in my headphones.

The breeze rolling off the ocean hits me, counteracting the heat with a deliciously salty tang, and I put my cell away, determined to be fully present in this moment. If vitamin D is the feel-good vitamin, I’m going to soak up as much as I can. I need to feel good right about now. I’m doing the most adventurous thing I’ve ever done, and no one can take that away from me.

Walking up King’s Point Drive to the beach felt like an adventure in a foreign land. People are friendlier and wear less clothing in Miami—clothing in a dazzling rainbow of colors—and a lot of women seem to wear bikini tops instead of real shirts or tank tops. Is this why they seem happier in Florida, or is it all the space? Maybe it’s just because it’s so close to the beach.

Without the tall buildings reaching high above like back home, the sky is nearly oppressively open, and I squint up at it for a moment before my eyelids pinch shut against the brightness of the sun. Shelby’s condo is on a little almost-island surrounded by water, with the Oleta River State Park on the west and the ocean a couple blocks to the east. I’m in Miami, but somehow I feel like I’m in an oasis away from it all.

I absorb the sultry thickness, blind to anything but that ocean scent, so unfamiliar and pleasant. I lie back on my elbows, relishing the pure sizzle of the sun on my skin…for about three minutes because, damn, it’s hot. How do sun worshippers do this every day without feeling the need to hire someone to baste them every half hour? Either that or hire a cabana boy to fan them and hand-feed them peeled fruits. Screw grapes—I’d like someone to peel the white crap off my oranges for me.

I grin and look around for a hypothetical candidate.

Sweat beads on my upper lip and tickles my back. Maybe I should mosey to that little stand where they’re renting oversize umbrellas to people who didn’t bring one—like me.

The stand where a woman in her late seventies waits in line, completely naked.

Blinking hard doesn’t make clothes appear on her body; her nudity isn’t a mirage. But what the hell is she doing? Is she a vagrant or someone senile who wandered away from her family? Did the ocean knock her bathing suit off? Was it eaten by a shark?

I blindly grope—grab—for my bottle of water because maybe this is a vision or hallucination brought on by the heat. Why isn’t anyone freaking out about Naked Grandma? Is it like staring at the sun? No one wants to see that, so a glance burns your eyes and you don’t try again or tell anyone you did it because it’s universally not done? Is everyone pretending they didn’t notice so they don’t have to make eye contact with her and tell her to put some clothes on?

She’s just naked and loitering like she’s waiting to check out at the grocery store.

Any minute now, someone’s going to approach her and say, “There you are, Mildred! Let’s get you tucked back into this caftan so you can parade around the beach with dignity and style.”

Swallowing a mouthful of water, I screw the cap back on the bottle and finally take a proper look at the people on the beach. There are some bathing suits, but…

Oh my God. No wonder no one’s saying anything to Mildred. My toes curl with embarrassment, even though I’m fully clothed with a long T-shirt over my tankini, because I’m somehow feeling exposed while covered up. Apparently, embarrassment through osmosis is a thing. I’ve never seen this much flesh in my entire life.

A topless thirtysomething woman applies sunscreen to her legs, her breasts jiggling with every motion.

Stop staring at her.

A naked man runs up the beach with a surfboard, flaccid penis bouncing around like one of those wacky, waving, inflatable, arm-flailing tube men.

An extremely muscular man jogs by, and my gaze zooms to his crotch with startling accuracy, like I’ve had years of checking out naked packages.

The thing is, I’ve never really seen a flaccid penis before. In my experience, by the time I’m in close proximity, they’re…ready for business, and who really pays attention after sex? You either get dressed or you’re snuggling with the guy under the covers, not staring at his spent member. My longest relationship was seven months, but we never lived together, so I haven’t experienced a naked, unaroused man casually strolling around my personal space.

A few more men stroll by, and I can’t—look—away.

I didn’t know thighs could be so hairy.

Old guys, young guys, burly guys, and skinny guys strolling around in the bright, bright sunlight, unafraid of getting burned in vital places. I mean, they have to put sunscreen on, but how can they apply it without being inappropriate? Talk about indecent overexposure!

Huh. Penises are so much sadder when they’re soft, sort of shrunken in on themselves like they’re embarrassed. It’s fascinating, and I absolutely cannot look at them without gawking. But the women are in the buff as well, letting it all hang out for everyone to see. Muscles ripple, booties jiggle, and I’m freaking mesmerized at how nonchalant everyone is about this.

Some people are wearing clothes, to be fair, but their suits might as well be invisibility cloaks. I’m blinded by flesh. Tamara Mataya is a New York Times and USA Today bestselling author, a librarian, and a musician with synaesthesia. Armed with a name tag and a thin veneer of credibility, she takes great delight in recommending books and shushing people. She puts the ‘she’ in TWSS and the B in LGBTQIA+. Website | Twitter | Facebook