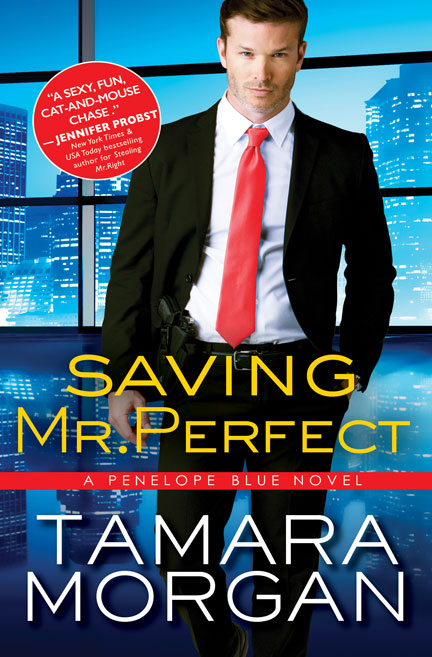 What’s that saying? Keep your friends close…and your husband closer.

Being a retired jewel thief certainly has its perks.

Without the thrill of the chase, life’s been pretty dull. Penelope gardens, drives her gorgeous husband up the wall, and watches as her old world slowly slips away. But what’s that old saying? When one thief closes the door…a copycat jimmies open a window. And now all fingers at the FBI are pointed at her. What’s that saying? Keep your friends close…and your husband closer.

Being a retired jewel thief certainly has its perks.

Without the thrill of the chase, life’s been pretty dull. Penelope gardens, drives her gorgeous husband up the wall, and watches as her old world slowly slips away. But what’s that old saying? When one thief closes the door…a copycat jimmies open a window.

And now all fingers at the FBI are pointed at her.

Set up to take the fall for thefts worth millions, Penelope have no choice but to strap on her heels and help her FBI agent husband track the thief. Grant might not think he needs a partner, but this is one case only a true professional can solve. Besides, she’s got to know who’s been taking her bad name in vain.

A sexy, fun, cat-and-mouse chase that hooked me from page one!”

There’s an apology gift waiting on the kitchen counter when I wake up the next morning. It’s not a bouquet of flowers (which I have little use for), and it’s not jewelry (which, oddly enough, is something I don’t wear much of). The cobbler’s children don’t have any shoes, and the jewel thief sticks to simple, understated pieces. That’s how I prefer it.

Grant knows this about me, which is why I’m delighted to find a pink bakery box with my name scrawled across the top instead. Doughnuts are a universal peace offering, and they’re one I gladly—and voraciously—accept. There’s nothing like criminal intrigue to get a girl’s appetite going.

Going too well, apparently. I’m holding a half-empty box and considering how to arrange the remaining pastries to make it look like I only ate a dainty few when Grant sneaks up behind me.

“Hello, wife,” he murmurs into my neck. It’s a smooth move rendered even smoother when he tightens his grip to catch my spasm of surprise. I seriously need to put a bell on that man one of these days. “Have I ever told you how much I enjoy waking up to your beautiful face?”

“Jesus, Grant. Were you hiding in a corner this whole time?”

His chuckle is a warm flutter of breath against my skin. “Do you mean did I witness you inhale those three maple bars? No. I was in the bedroom.”

I bump him with my ass in mock annoyance, but his hands slide down to my hips and hold me there. It’s the perfect position to have me pinned between a rock and a hard place—namely, him and the kitchen counter. Most of the rocks and hard places in my life include Grant in some form or another, but at least this one comes with a kiss that takes my breath away.

He starts, as he so often does, with my neck. I’ll never know what it is about that part of a woman’s anatomy that interests him so, but from the way he plants a line of soft kisses along the slope of my shoulder and up to my jawline, it’s clear he intends to take his time—and enjoy himself in the process.

He’s not the only one. Most of Grant’s body is a solid wall of sinew and bone, difficult to break and hard to deny, but his lips have always been incredibly soft. They’re also as insistent as the rest of him, growing increasingly demanding the further north he goes. By the time he reaches my lips, he’s tilting my face to meet his mouth with my own.

“Mmm,” he groans as his tongue sweeps against mine. “You taste like maple and sugar. I should get you breakfast more often.”

More arousing words have never been spoken, and I couldn’t move now even if I wanted to. One of his hands holds me in place, grinding me against the counter. The other grips my chin so he can continue his assault unabated. His mouth is hot and demanding, his tongue stroking until I’m grateful that he’s holding me up.

If this man ever learned how much power he has over me, I might be in real trouble. He breaks me down and holds me up at the same time. He makes it impossible for me to live with or without him.

I swear I’d hate him if his kisses didn’t feel so damn good.