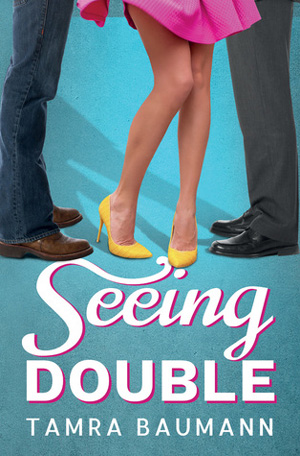 From Tamra Baumann–SEEING DOUBLE is the first book in my new Heartbreaker series. It’s a light-hearted contemporary romance with a little bit of danger, some hard to explain hunches, and lots of fun. It features a woman who is determined to step out from her famous mother’s shadow and start her new independent life, but two men are giving her migraines. She is a one-man kind of gal, but choosing between two great guys is never easy.

SEEING DOUBLE is the first book in my new Heartbreaker series. It’s a light-hearted contemporary romance with a little bit of danger, some hard to explain hunches, and lots of fun. It features a woman who is determined to step out from her famous mother’s shadow and start her new independent life, but two men are giving her migraines. She is a one-man kind of gal, but choosing between two great guys is never easy.

The day I  picked up a Nora Roberts novel. I read that story and all I could get my hands on after that. I had no idea how I could have missed this wonderful genre of books that made me laugh, cry, and fall in love all over again with each story I read. It lit a fire deep inside of me. So I finally acted on my secret desire to be a writer. Something I had written off as impractical way back in high school.

Nora, of course. She always says, “You can’t fix a blank page.” Even on days I’m not feeling very creative or funny, I make myself write and then fix it later. Some of the more stubborn scenes may call for a glass of wine or two.

Ah, the perfect hero. I couldn’t choose just one for this book. Jake is a tall, lanky, blond, cowboy cop whose flirtatious nature makes him a charmer. Michael is dark-haired, green eyed, and is an ex NFL football player who hasn’t lost his athletic build. He’s a lawyer now and the compassion he has for his children, and Dani, make him the strong, steady type.  (PS, The one Dani doesn’t choose gets his own book next). For me personally, I go for more the average Joe with a big heart. Who’d want to compete for morning mirror time with these handsome men with their perfect hair?

I love to read, hike, watch all the reality shows on Bravo, and travel! I collect Christmas ornaments for our tree from all the places I’ve been.

While I have traveled to some amazing places, I think my biggest adventure to date has been the journey to becoming a full-time writer. It began with a blind leap of faith when I quit my day job. After that, locked and loaded for whatever dangers lurked ahead, I took aim and snagged my dream agent. Together we forged through all the no’s and persevered until we captured that rare and elusive book contract! Next, I battled against nerves and anxiety when the reviews hit for my first published book, then barely survived the ‘second book can’t possibly be as good as the first book’ doubts.  Somehow, I completed my first series, all while still in one piece and mentally intact. (Well mostly anyway. Some might argue I’ve never been all the way intact mentally)  Writing isn’t for wimps!

I like to describe myself as a constant work in progress. I love to learn new things, meet new people, avoid toxic situations, and try to be kind to everyone. (Even those annoyingly bad drivers who don’t use their blinkers at four-way stop signs.)  I asked my three critique partners how they would describe me and this is what they said: First and foremost they all agreed I drink too much caffeine. Hence, these words were used: Persistent, hard worker, top-of-the-line-networker, over-achiever. But at the core they said I am supportive, humorous, kind, gentle, and a person who loves to laugh. I will add that they all knew I hadn’t critiqued their work yet for this week, so this might have influenced their kind word choices and inspired some sucking up.

I am in the final rounds of edits on the second book in this series, DEALING DOUBLE.  We plan to release that one February 13,th  2018.  And then I’m going to start writing the fourth book in my Matchmaker series. Thanks so much for hosting me today! Dani Botelli has vowed to step out of her demanding movie star mother’s shadow, and is determined to start a new chapter in her life. But two men are making for double the trouble. There’s Jake, her police detective almost-ex who wasn’t so hot as a husband but sizzles between the sheets. He needs Dani’s intuition and visions to help him solve crimes. Then there’s her high school crush, Michael, a former NFL pro who’s now her mom’s hunky lawyer.

Working alongside Jake, while keeping her special gifts under wraps, is proving to be more dangerous than Dani realized. She needs to stay out of harm’s way—and out of Jake’s arms—long enough to find out if Michael is the one. But will her hard-to-explain hunches be the secret that comes between them? Tamra Baumann became hooked on writing the day she picked up her first Nora Roberts novel from her favorite bookstore. Since then, she’s dazzled readers of contemporary romance with her own lighthearted love stories. She was the 2012 Golden Heart winner for Contemporary Series Romance, and has also received the Golden Pen Award for Single Title Romance. Born in Monterey, California, she led the nomadic life of a navy brat before finally putting down permanent roots during college. When she’s not attending annual Romance Writers of America meetings, this voracious reader can be found playing tennis, traveling, or scouting reality shows for potential character material. She resides with her real-life characters—a husband of thirty years, two kids, and their allergy-ridden dog—in the sunny Southwest.