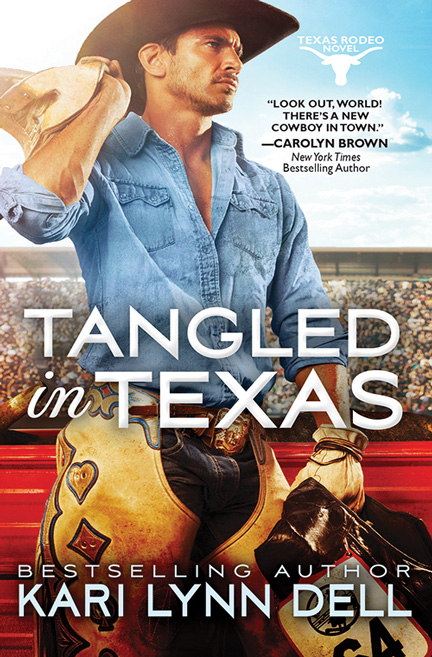 Thirty-two seconds. That’s how long it took for Delon Sanchez’s life to end. One minute he was the best bronc rider in the Panhandle and the next he was nothing. Knee shattered, future in question, all he can do is pull together the pieces…and wonder what cruel trick of fate has thrown him into the path of his ex, the oh-so-perfect Tori Patterson.

Sortin’ the Herd—How a Real Cowgirl Cuts Off the Strays

Nowadays pretty much anyone can pop online and order up a full set of cowboy duds to wear to their nearest rodeo. Which I think is awesome, by the way. The companies that sell those hats, boots and peart snap shirts are also the sponsors that keep my favorite sport in business. I’d be thrilled to pull into the next rodeo and see a Stetson or Resistol on every head, and Justin or Ariat boots on every pair of feet. But it also makes it harder for a girl to tell…which are the real cowboys, and which are just playing the part?

Luckily, it doesn’t take long to sort off the bleacher buckaroos. I’ve put together a few never-fail tips to help you identify the wanna-be’s, like this one:

He boasts about his lariat, which he claims he can use to lasso a calf faster than anyone at tonight’s rodeo. Real cowboys (and cowgirls) do not lasso, except ironically, and in my world rope is both a verb and a noun. The act of attempting to capture a running bovine is roping, and the thing we use to do it is called a rope. Unless we call it a nylon, a poly or a grass, which are different types of ropes used for different kinds of roping, based on what they’re made of. And yes, technically it’s that kind of grass (aka, hemp), but I wouldn’t recommend trying to cut it up and smoke it. Although, when you’ve failed to make the loop go around the calf’s neck at five rodeos in a row…it can be tempting.

Take note of the word in bold face above. When you’ve finished reading about Tangled in Texas and enjoying the excerpt below, come on over to my blog, Montana for Real, to find the rest of my helpful hints. Collect all the of key words and you’ll get a free download of the unofficial soundtrack to Tangled in Texas. It took 32 seconds to end his career.

But it only took 1 to change his life.

Thirty-two seconds. That’s how long it took for Delon Sanchez’s life to end. One minute he was the best bronc rider in the Panhandle and the next he was nothing. Knee shattered, future in question, all he can do is pull together the pieces…and wonder what cruel trick of fate has thrown him into the path of his ex, the oh-so-perfect Tori Patterson.

Tori’s come home after her husband’s death, intent on escaping the public eye. It’s just her luck that Delon limps into her physical therapy office, desperate for help. All hard-packed muscle and dark-eyed temptation, he’s never been anything but a bad idea. And yet, seeing him again, Tori can’t remember what made her choose foolish pride over love…or why, with this second, final chance to right old wrongs, the smartest choice would be to run from this gorgeous rodeo boy as fast as her boots can take her.

They sat in the dark, staring at the television and taking comfort from the presence of another human being. A fellow refugee from reality, if only for a few hours. Crazy, to get even this close when she seemed dead set on leaving again, but as long as he knew, as long he didn’t let himself dream, he was safe, wasn’t he?

He woke to someone jostling his pillow. He forced his eyes open and found Tori leaning over him, trying to tug her coat from the arm of the couch, under his head.

“What time is it?” he mumbled, twisting around to look out the window. Pitch dark.

“After midnight. We both slept a while.”

She gave the jacket another tug, but it was pinned under his shoulder. He was warm and relaxed, still half asleep. Before his mind could fully engage, he reached up and caught her wrist. She froze, her eyes wide and wary in the dim light.

“What if I said I don’t want to just be friends?” he asked, his voice raspy with sleep.

She stared down at him, emotions flickering across her face so fast he couldn’t identify any of them. “I would say that’s probably not the smartest thing we could do, given the situation.”

“And if I said I’m willing to take my chances?”

She took her sweet time thinking it over. “I need some time to…adjust my expectations.”

He stroked the tender underside of her wrist with his thumb, watching as her lips parted on a swift intake of air. He might not know her mind, but he knew her body, and he remembered exactly how she liked to be touched. “How long?”

“I don’t know. This thing with my parents…”

“Will you let me know when you’re ready?”

She shook her head and his heart sank, but then she blew out a reluctant sigh. “Check back with me in a couple of weeks.”

“The middle of February?” he asked, unable to leave it alone.

She gave a halfhearted shrug, her gaze tracking to the door, though she still didn’t pull away from his touch. “Sure. Why not?”

He could think of a dozen reasons—things he’d done, and she’d done, and all the ways they could hurt each other all over again—but he stroked her wrist one more time before sitting up to free her jacket. She pulled it on, tugged the zipper clear to her chin, and stuffed her hands in the pockets.

She gave a low, short laugh. “Think of the magic we could make together.”

He didn’t have to imagine. He had a perfectly good memory. As if reading his mind, she said, “I’m not that girl, Delon.”

She smiled slightly at her own words. “I’m also a lot more…difficult.”

No kidding. But he needed to borrow some of that toughness, from someone who’d gone through the worst and was emerging from the other side, singed around the edges but not destroyed. Tori understood the snarl of anger and guilt in his gut because it wasn’t so different than what she felt about how Willy died.

“I’d like to get to know this you,” he said softly.

“I might not be ready to decide who I am yet.”

“Decide?” He laughed, incredulous. “You just get to make it up for yourself?”

“Why not? Didn’t you decide who you wanted to be?”

His fists clenched in the plush throw. “We don’t all have the luxury of reinventing our lives.”

She gave him a long, level stare. His eyes dropped first. Her voice was low and surprisingly gentle. “Try it, Delon. You might be less likely to feel like punching strangers in bars.”

She brushed a fingertip as light as a kiss across his cheek, and left him to sleep on it.

Kari Lynn Dell is a ranch-raised Montana cowgirl who attended her first rodeo at two weeks old and has existed in a state of horse-induced poverty ever since. She lives on the Blackfeet Reservation in her parents’ bunkhouse along with her husband, her son, and Max the Cowdog, with a tipi on her lawn, Glacier National Park on her doorstep and Canada within spitting distance. Her debut novel, The Long Ride Home, was published in 2015. She also writes a ranch and rodeo humor column for several regional newspapers and a national agricultural publication. 5 print copies of Reckless in Texas