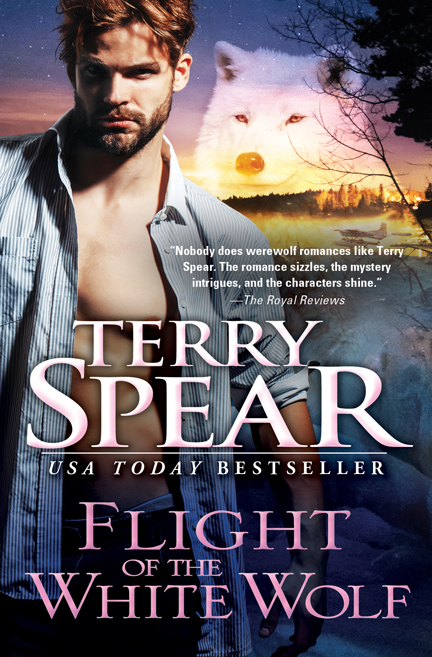 FLIGHT OF THE WHITE WOLF by Terry Spear.

Stranded in the wilderness, these warring hearts will be forced to work together—or die together.

Gavin Summerfield—an arctic wolf shifter with a fear of flying—has to fly into the vast lakeland wilderness of northern Minnesota to track down his suspect—where his ability to shift will come in very handy. Imagine his chagrin when his pilot turns out to be the woman who tasered him last time they saw each other. Things are off to a rocky start…again.

Title: Flight of the White Wolf

Stranded in the wilderness, these warring hearts will be forced to work together—or die together.

Gavin Summerfield—an arctic wolf shifter with a fear of flying—has to fly into the vast lakeland wilderness of northern Minnesota to track down his suspect—where his ability to shift will come in very handy. Imagine his chagrin when his pilot turns out to be the woman who tasered him last time they saw each other. Things are off to a rocky start…again.

Arctic wolf shifter Amelia White isn’t entirely displeased to see Gavin again, but priorities shift when their plane is sabotaged and goes down in the middle of nowhere. As their attraction grows, Amelia hopes Gavin doesn’t discover the secret she’s been keeping…she knows he could never forgive her…

As a wolf, Gavin ran through the woods, searching for recent signs of anyone having been on the island. He was sniffing wet leaves, looking for tracks, and watching for any movement. While he was searching for anyone, he thought about Amelia and what she’d told him. As a cop, or a PI, instinct told him he needed to investigate every detail of her story to prove she had been telling the truth. Gut instinct, or some lower power, was telling him she was the wolf for him and everything she had told him was true. That she was innocent of any crime, a victim every bit as much as he had been. He wasn’t sure he would have ditched a plane to save himself and another passenger. That took real mettle. Even then, she’d managed to do so in a way that everyone had survived. At least initially, after they had crashed.

When she’d finally fallen asleep during their nap, her breathing steady and her heartbeat slowed, Gavin had moved Winston over so he could be next to her again. He liked the intimacy they’d already shared. And he wasn’t taking any steps back from this. He was certain they could put the past behind them. The thought kept running through his mind that she had saved him three times already. That had to mean a whole hell of a lot. And it sure sounded like mate material to him. He did worry she might want to leave for the bay without him to wait for a seaplane to pick her up. After what had happened to her plane, he wasn’t letting her out of his sight until she was safely on her way back home.

He’d been running about an hour and continued to move through the spruce trees, and checked the shorelines so he could see if anyone was camped across the lake on the island about an eighth of a mile away.

He suddenly saw movement across the lake. A soaking wet, black bear was lumbering out of the trees to drink from the water, but then saw Gavin and watched him with a wary eye. Gavin was glad the bear was on the other island. Gavin continued running along the rocky beach when he saw a bright yellow canoe on the south side of the other island, the symbol on the boat indicating it was a rental from Ely. Excited to see anyone in the vicinity, Gavin would have to return in his canoe and see if he could locate the paddler. But then he saw a man in the woods, near the edge, wearing a camo jacket and pants, boots, and hat, like he was dressed to hunt, not that it was allowed out here, or he was on a military mission. The only reason Gavin even saw the guy was that he’d turned to head deeper into the woods and out of view, bags in hand. He was probably carrying his gear over a portage. The movement had caught Gavin’s eye, but he didn’t think the man had seen him or he would have come out of the woods to get a closer look at the out-of-place Arctic wolf.

This was one time when Gavin wished he was in his human form and he could call across the lake to get the man’s attention. In the direction the bear had been, motion across the lake caught Gavin’s eye. Sure enough, the bear was heading for the canoe. He must be smelling the scents of food that had been carried in the craft. When he finally reached the guy’s canoe, he poked his nose into it. Apparently not finding anything, the bear headed into the woods the way the paddler had gone. He had to be making a couple of trips to carry all his gear across the portage. Gavin hoped he didn’t run into the bear. But Gavin imagined the bear was smelling the food the man was probably carrying.

With any luck, the man had something to make lots of noise and scare off the bear.

Gavin thought the bear might help to delay the paddler from reaching his canoe on the return trip, which could give Gavin time to come back as a human and meet him. Gavin lifted his chin and howled to Amelia back at their makeshift camp to let her know he found something.

She howled from another direction way on the other side of the island, confusing and concerning him. She was supposed to be staying with Winston as a human at their campsite. What was she doing running as a wolf? Where was Winston? He immediately worried they’d had trouble and she felt safer as a wolf.

His heart racing, Gavin tore off toward the direction of her howl, stopping for a moment to howl again, to let her know he was coming to her location. She howled back to acknowledge his message. He ran for about half an hour when he heard something moving in the brush, turned and saw Winston. The dog ran to greet him and he greeted him back with licks to the face. Not immediately seeing her, Gavin woofed for Amelia.

USA Today bestselling author Terry Spear has written over sixty paranormal romances. In 2008, Heart of the Wolf was named a Publishers Weekly Best Book of the Year. A retired officer of the U.S. Army Reserves, Terry also creates award-winning teddy bears that have found homes all over the world. She lives in Spring, Texas with two Havanese puppies.

Enter for a chance to win a copy of the first book in Terry Spear’s White Wolf series, Dreaming of a White Wolf Christmas!