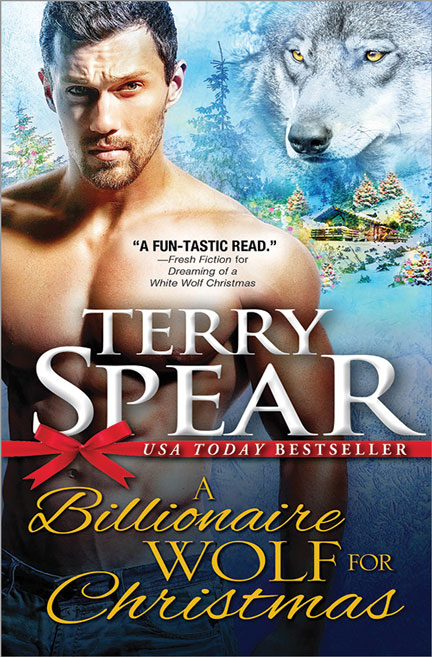 In Terry Spear’s A BILLIONAIRE WOLF FOR CHRISTMAS, Wolf shifter Dr. Aidan Denali has been working day and night to find a cure for werewolves’ alarmingly sudden decline in lifespan. The key to the problem eludes him. But when Aidan grudgingly leaves his work to do some holiday shopping, he meets a remarkable she-wolf whose mysterious pack could bring him one step closer to the answer. When the wolves’ own blood betrays them, they risk their lives to find a miracle.

Wolf shifter Dr. Aidan Denali has been working day and night to find a cure for werewolves’ alarmingly sudden decline in lifespan. The key to the problem eludes him. But when Aidan grudgingly leaves his work to do some holiday shopping, he meets a remarkable she-wolf whose mysterious pack could bring him one step closer to the answer.

Dr. Holly Gray is thrilled to meet the wolf who’s been working so hard to help others. Now, it’s her turn to help him. But while their attraction is sizzling, the packs are at odds, and the danger is increasing. It’s going to take a holiday miracle for Holly and Aidan to get themselves—and their loved ones—out of this alive…

Before they had supper that night, Ted had put on some nice instrumental Christmas music and God Rest Ye Merry Gentleman was playing. Even though they hadn’t intended on staying here for the holidays, hadn’t even planned to be here for it, the guys were making an effort to add a little Christmas cheer for their unexpected guests, and Aidan really appreciated it.

Ted and Mike were speaking in private in the kitchen, but Aidan overheard a little of the conversation while he, Holly, her brother, and Nick were piecing together a 1,000-piece wildlife puzzle on the coffee table in the living room. Everyone who visited the cabin tried piecing the puzzle together for a time. Though they usually did so many outdoor activities, that this was a nighttime activity when they wanted to wind down, drink beers, sit before the fire, and have something more to do while having a conversation.

Ted and Mike were saying something about making spaghetti for Nick, Greg, and themselves, because they didn’t have enough for all six of them. Aidan knew better. They always overbought food supplies when they picked up groceries as if they were cooking for a whole army of wolves for a month so they’d have plenty of meals. They planned to serve a special dish of veal parmesan, new potatoes, asparagus, and wine for the docs. They sounded like they had taken on the role of matchmakers too. Maybe they believed Aidan needed help in the romance department. With Holly, he didn’t need any encouragement or assistance, though he could use more privacy.

He eyed the puzzle, but then looked again at Holly when she pushed another piece into place. She’d done it with twice the number he’d placed. He and Rafe and the others who came here with them hadn’t finished a lot of the puzzle, maybe a hundred pieces since they bought it a few months ago and hadn’t been up here but once since then. But at the progress she was making, she’d have it done in short order. He was trying his darnedest to find another piece that would fit in next to some of the border, since that was completed.

She watched him for a minute and pointed to a puzzle piece that was lying among the ones he’d spread out. “Can you hand me the blue one that has a couple of orange leaves floating on the water?”

She smiled at him and leaned over him, brushing her body against his in a sexy way when she could have easily avoided touching him. He took advantage of the opportunity to wrap his arms around her and kiss her cheek. “Have you put this puzzle together before?”

“No.” She reached for the puzzle piece. “This one. See how that part of the leaf fits in there with the partial leaf on that part?” She pointed out the parts of the small puzzle piece, but he still couldn’t see that it would work.

He also realized, even if she had put the puzzle together before, the puzzle had too many pieces to be able to know where they would all go again. She’d eyed the picture of the finished puzzle on the box cover for a long time before she had begun doing her part.

He was still trying to find a puzzle piece when she placed three more. If he was in a race and not doing this just for fun, he would have felt outdistanced in a hurry. Then he studied her for a minute more, watching her place another piece, and frowned. “Are you eidetic?” It was rare to find an adult who was.

“Some think so. I can see a visual of something, like the puzzle box cover, and remember where everything goes for a short time. When I see the pieces, I can recall the bordering pieces they connect with. But not long term. If we did this for a couple of hours, I would have to look at the cover again.”

“That’s a heck of a lot better than I can remember. We’ve got to do this as teams when we go to the chalet, just for kicks.”

She laughed. “You mean you and I would team up against Rafe and Jade? That would be cheating. Now, if Jade and I took you guys on—”

“You’d have an unfair advantage.”

“Some children have it, but unless it’s nurtured, the ability is lost. I guess I just was interested in recalling visuals I’d seen, and it helped to keep that ability alive.”

“I wish I’d done that. Not long enough attention span for me though,” Greg said.