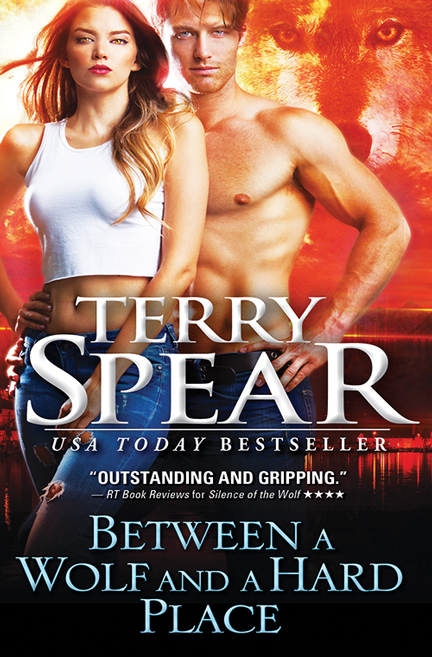 BETWEEN A WOLF AND A HARD PLACE by Terry Spear

One lucky commenter will win a print copy of BETWEEN A WOLF AND A HARD PLACE. ** US only

A Question for Terry Spear:  What inspired you to write about a shifter who can also speak to the dead?

When I was a kid, I read lots of ghost stories. I don’t know why, but I just loved them. I never believed they were real. Loved “Ghost” with Demi Moore, Whoopi Goldberg, and Patrick Swayze; “Ghost and Mrs. Muir,” stories where psychics can learn from the dead to help them find peace. Stories of psychics who help the police to find missing persons, bodies, and evidence.

And then I had my own ghost stories that occurred. When it happens, I believe there’s something that will explain it. No way is there anything ghostly about it.

To me, it’s like an echo of the past that appears—in the case of the letter C in the story, that really happened in my house. My mother and daughter and son and I saw it. It was there. And then it was gone.

But in other cases, I’ve had auditory experiences. In one, I was camping with Army ROTC cadets in Palo Duro Canyon and in the middle of the night, I heard horses running toward us—heard them neighing and snorting, their hooves pounding the ground and they were headed in our direction. We were in sleeping bags. The horses wouldn’t turn. I know, because a stampede of deer ran through a family’s tent that we were camping with when I was a kid, so I knew the horses would trample us. I thought of it when this was all going on.

I woke my sister, but she just told me to go to sleep. I couldn’t. The horses were headed our way. Wild mustangs. And then they turned and faded off into the night. Relieved, I finally fell asleep. The only thing I thought was in our favor, was I couldn’t feel the hooves pounding the earth beneath us. So I kept thinking they had to be farther away than they sounded. The next morning, we had breakfast and I asked about the wild mustangs. “Sure,” one of the cadre said. “They could be out here.”

Years later, I went to write a story for a magazine about the wild mustangs running through the canyon. But I did a search on the Internet to learn more about the wild horses. This had been years earlier that I’d been there, and no Internet at the time. There weren’t any horses there. But others had heard the horses in the night—the Indian tribes’ horses that the cavalry ran off the cliffs to keep the tribes from fighting them further. The horses had been run off the cliffs to their deaths.

In another case, I was in Scotland with a couple of Highland romance writer friends, and we stopped to take pictures of Highland cows out in a pasture. There were no homes, a river, hills, trees, the pasture. There was nothing else out there. And yet as my friends walked toward the gate, I headed for where the cows were, and heard the most beautiful Celtic music. When I reached the fence to take pictures of the Highland cows, the music stopped. When my friends joined me, I asked them, “Wasn’t that the most beautiful music?” Neither of them had heard it at all.

Another time, also when painting the house to get it ready to sell it, the same house with the incident of the letter C, my daughter and I were painting the bathroom, and I heard her playing beautiful New Age music in her bedroom. I asked her what it was. She said she wasn’t playing any music. We checked the bedroom, but it had stopped. We checked outside to see if anyone was playing music, but we had five-acre lots, no houses for miles in front of us, and five-acre lots back up to ours. No one was playing any music. She hadn’t heard it.

So why did I write about a shifter who can speak to the dead? I want everyone to live in peace—the living and the dead. Between a Wolf and a Hard Place
by Terry Spear

Ellie is even more special than Brett knows. She’s a wolf-shifter with a unique ability to commune with the dead. Ellie has been ostracized, so she protects herself and those she loves by revealing nothing—not even when strange and dangerous things begin to happen in Silver Town. And especially not to the devastatingly handsome and generous wolf who’s determined to win her over…

USA Today bestselling author TERRY SPEAR has written over 35 paranormal romances featuring werewolf and jaguar shapeshifters. In 2008, Heart of the Wolf was named a Publishers Weekly Best Book of the Year. A retired officer of the U.S. Army Reserves, Terry also creates award-winning teddy bears that have found homes all over the world. She lives in Spring, Texas.