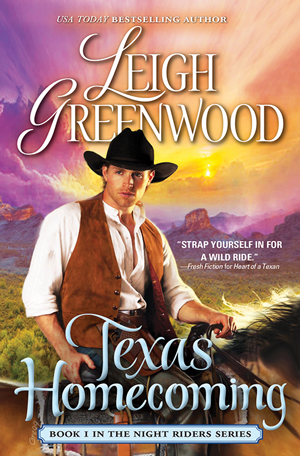 Cade, Captain of the Night Riders, is determined to lead his men home to Texas to recover from a long and brutal war. But when a fellow Rider betrays the team, Cade sets aside his hopes for peace and swears he will hunt down the traitor no matter what it takes… Cade, Captain of the Night Riders, is determined to lead his men home to Texas to recover from a long and brutal war. But when a fellow Rider betrays the team, Cade sets aside his hopes for peace and swears he will hunt down the traitor no matter what it takes…

He has a foolproof plan to use the feisty Pilar diViere to lure her traitorous brother out of hiding. And yet when he takes the dark-eyed beauty into his arms, Cade can’t help but remember the passionate past they shared. He would do anything for a chance to rekindle that flame…even spare her brother’s life.

The war has changed them all, and each of the Night Riders must decide what is more important: love or revenge?

“I don’t want you to think I agreed to marry you for purely mercenary reasons.”

“I don’t. You wanted freedom, to be respected as a person. In return, you were willing to give me the comfort and pleasure of your body.”

Pilar felt a muscle in the back of her neck jerk, her stomach do a quick somersault. She hadn’t guessed that even under these circumstances their being together could give rise to a physical response in Cade. She recognized his look—the need, the naked hunger. For the first time, she realized this wasn’t just sexual need or hunger. It was the need and hunger of a man who felt just as alone as she did, a man who felt people valued him only for what he could do for them, not for who he was.

She’d never seen him let his barriers down. He’d always been the one everyone else turned to. She’d never thought of how lonely that must be, always holding himself to a higher standard, never relaxing, never allowing himself the luxury of making a mistake. Never letting anyone see his doubt or uncertainty.

“Do you need the comfort and pleasure of my body? I know you want it,” she said when he didn’t respond, “but do you need it?”

It was an important distinction to her. She watched him struggle with himself. She wondered why it was so difficult for him to admit he needed her.

“Wheelers never admit that they need anyone.”

“Neither did the diVieres, and look where it landed us. Maybe my grandmother should have married your grandfather.”

Whatever else she’d meant to say was lost in Cade’s crack of laughter. “They’d have killed each other.”

“We couldn’t be husband and wife.”

“Am I that important to you? Do you need me even a little bit?”

“Why?” Nobody had never needed her.

“Ask me about ranching or fighting, and I know exactly what to say, but I’m not good at putting feelings into words,” Cade said. “I never met a woman who affected me the way you do.”

“Like I said, I can’t put it into words.” He pulled her into an embrace. “Surely you know I like kissing you.”

Yes, she knew that. She wanted more, needed it, and Cade obliged. His mouth took hers in a hard, hungry kiss. Pilar wanted to be needed, too. And Cade’s very solid presence answered that need in a way Manuel never could have.

But there was something different about tonight. She seemed to need him more than ever. Not his verbal assurances but his physical presence, his touch, his body’s demonstration that she had a profound effect on him. In San Antonio the sensitivity of her breasts and the awareness of his swollen sex had made her uneasy. Tonight she wanted to press herself against him until she felt absorbed. A kind of tension, a kind of mystic understanding, began to hum between their two bodies, and they fed off each other.

Pilar didn’t feel uneasy when Cade’s hand slipped between their bodies and cupped her breast or when he ground his hardened body against her abdomen. She felt thrilled she was able to affect this strong man so dramatically, thrilled to have his need of her so palpably demonstrated.

What she hadn’t anticipated, hadn’t even suspected, was her need of him.

She had long since cataloged and memorized the list of reasons why she should marry Cade, why she wanted to marry him. Nowhere on her list did she find physical need, but she quickly realized that her need to be close to him was more than a need for physical safety. This was visceral, something so deeply imbedded in her that she didn’t need to understand. Her body knew all that was necessary.

She heard herself moan softly when Cade’s lips deserted her mouth to trail along her jaw and down the side of her neck to her shoulders. She moaned again when he delved inside her dress…

Leigh Greenwood is the USA Today bestselling author of the popular Seven Brides, Cowboys, and Night Riders series. The proud father of three grown children, Leigh resides in Charlotte, North Carolina. He never intended to be a writer, but he found it hard to ignore the people in his head, and the only way to get them out was to write. Visit him at www.leigh-greenwood.com.

One Response to Texas Homecoming by Leigh Greenwood Spotlight & Giveaway