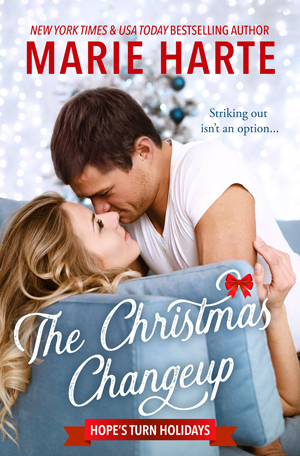 It’s that time of year again. With Halloween out of the way, it’s time for the end of the year holiday romances! Take a pro baseball player, mix him with the one who got away a LONG time ago (who also got left at the altar by a real jerk), and you have a sizzling heartwarming romance! Spice up your reading with THE CHRISTMAS CHANGEUP! 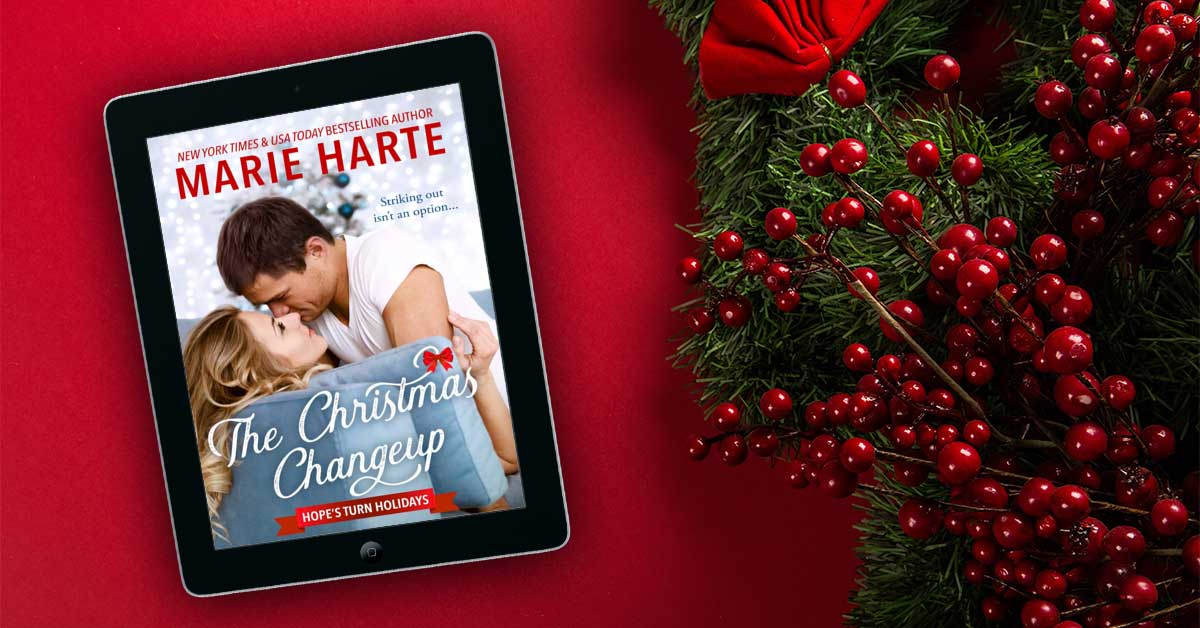 Striking out isn’t an option…
A stand-alone holiday heart-warmer that sizzles.

Piper Mason remembers Grant Weston as the cute little boy with a crush she’d once babysat, back when she’d been thirteen and he’d been nine. Many years later, Piper is babysitting once again. This time it’s her teenage niece while house-sitting for her brother. Except…no one told her to expect a house guest. A man too good looking to be real with a smile that blinds. A man who plays for a major league baseball team back in town for the holiday.

A man who’s returned to make good on his twenty-year old pledge to marry her!

And he’s not leaving until he’s rounding home with the girl who got away.

“Oh my God! Is that my bra?” Piper Mason screeched, as only a thirteen-year-old can.

“Run, Grant! Run!” Jared Mason yelled while doing his best to keep his younger sister from tackling the small boy.

The boy’s older brother was laughing hysterically at the sight of nine-year-old Grant running around with a girl’s bra strapped to his head. Actually, Grant didn’t mind wearing it because it kept his ears warm, and with winter around the corner, he could use an extra dose of heat.

He pumped his legs and outraced Piper around her house outside, up the alley, and back around to her driveway. With her still yelling at him from some distance away, he circled back inside and snuck into his favorite room in the house—Piper’s room. He studied her many posters in awe. Wonder Woman had been plastered all over the walls in a bunch of different poses and costumes.

He stepped closer, wondering who had drawn such amazing pictures, committing the lines, angles, and colors to memory, when the bedroom door banged open and a furious girl breathing way too hard stood heaving, her glare like a laser zeroed in on his chest.

He stared, speechless, as she yanked her bra off his head and verbally lit into him.

Her blond hair seemed to glow. Her eyes reminded him of that well on Grandma’s property, the one that if he leaned too far forward, would swallow him up and never let him out. He couldn’t look away from Piper’s glare, though her eyes put him more in mind of sweet brown honey than never-ending darkness.

Man, Piper was so pretty. She made him feel funny inside, happy and scared and just… wonderful.

“Hey, are you okay?” Piper frowned, having finally wound down. “You haven’t blinked once.”

He didn’t mean to ask, but he had to know. “Do you have a boyfriend?” he blurted, his cheeks burning.

“I’m thirteen. Boys are gross.” She blushed. “Why would I be dating right now?”

He ignored her mistaken belief about boys. Relief filled him. “No reason.” He looked around. “I like your posters.”

“Oh, thanks.” She glanced up at a nearby Wonder Woman and smiled. Then she looked back down at him and wrapped her bra around his neck. “This is my lasso of truth.”

His eyes widened. “No way.”

“Yes, way. Who put you up to taking my clothes?”

He knew it shouldn’t be possible, but he’d swear he could feel the truth working through him. “Jared.”

Her lips mashed together. “Hmm. And who encouraged you to take it from my room?”

“Cade. My brother thinks you’re cute, but he can’t say that to Jared because Jared will hit him if he does.”

“I know.” He motioned for her to come closer. “I have a secret.”

“Tell me.” She toyed with the blond ponytail over her shoulder.

Her hair was long. And pretty. And golden, just like Wonder Woman’s belt. “Well, I think you’re cute too.” He nodded when she just stared at him. “When I’m big, I’ll marry you and you won’t think boys are gross. Because I’m not gross. But you have to wait until after baseball is over. Okay?”

“Uh, sure, sure.” She dropped the bra to the floor. “Now how about you pinkie promise me not to take my clothes again? And to stay out of my room?”

“Well…” He liked hanging out when she wasn’t around and his older brother told him to go away. Usually, Grant would just hang in Jared’s room messing around with his old toys, but sometimes the older boys wanted privacy. He had no idea why. But he didn’t mind if he could spend his time in Piper’s room. It always smelled nice, like bubblegum and flowers.

“I’ll, um, give you this.” She handed him a small figurine.

“Who’s this?” He stared. It wasn’t Wonder Woman. The figure kind of looked like Piper.

“I can keep it?” He wanted it, badly, and curled his fingers around the figurine.

“Yep.” She stared at him and smiled. “Tell you what. You go do your baseball and keep away from my stuff. And in twenty years, when you come and propose, we’ll get married. Okay?”

“Yes. I will. I’ll do that.” He held out his hand, and they shook. It wasn’t a pinkie promise. It was one better. Cemented on the word of Piper Mason herself.