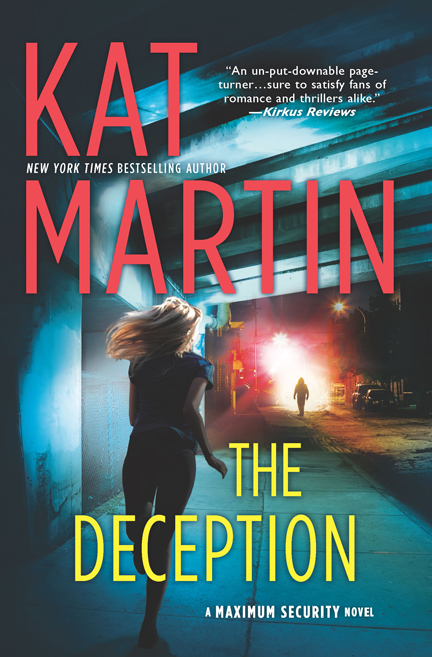 “Fans of romantic suspense won’t be able to put this book down until the final page is turned, and Martin is likely to recruit thriller readers as well as romance fans with this snappy story.”   Publisher’s Weekly

In Kat Martin’s latest Romantic Thriller, THE DECEPTION, book two of the Maximum Security series, Kate Gallagher is devastated when she learns her sister has been murdered. Determined to find Chrissy’s killer, Kate hires lethal bounty hunter, Hawk Maddox. Working together, they follow a trail of clues that lead them deep into the city’s underbelly. Though Hawk warns Kate of the danger, nothing he says can convince Kate to walk away. When it comes to Romantic Suspense, one of the most import and often the hardest thing to do is to find the right match for the hero or heroine who is the primary character in the book.  In THE DECEPTION, Hawk Maddox is a former Marine, a strong, tough, sometimes reckless, chance-taker.  I needed a woman who was equally strong, tough-yet-feminine woman who could handle his reckless nature.

And because Hawk was an extremely virile male, a passionate woman, as well.

Kate Gallagher was all of those things.  She also strongly believes in justice, which means finding the killer who murdered her

sister takes precedence over a relationship with Hawk.

As the two are thrown together in their search for a killer, Hawk and Kate begin to appreciate the strengths they find in each other.

And there is the sexuality that vibrates between them. Though Hawk wants Kate from the moment he spots her on the dance floor of the Sagebrush Saloon, he understands her grief and her resolve.  Though the time isn’t right, Hawk comes to believe Kate Gallagher is a woman worth waiting for.

Working to make them a couple was fun, and of course sending them on a dangerous, desperate adventure added to the excitement of writing the book.

I hope you’ll look for THE DECEPTION, and if you haven’t read Chase Garrett’s story, THE CONSPIRACY, I hope you’ll give it a try.

Until next time, all best and happy reading.  Kat An Excerpt from THE DECEPTION. Bestselling author Kat Martin, a graduate of the University of California at Santa Barbara, currently resides in Missoula, Montana with Western-author husband, L. J. Martin.  More than seventeen million copies of Kat’s books are in print, and she has been published in twenty foreign countries.  Fifteen of her recent novels have taken top-ten spots on the New York Times Bestseller List, and her novel, BEYOND REASON, was recently optioned for a feature film.  Kat’s next hardcover, THE ULTIMATE  BETRAYAL, a Romantic Thriller, will be released on July 28th.