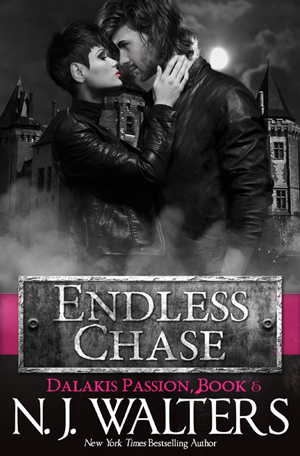 A holiday post from NJ Walters, author of ENDLESS CHASE.

The holidays are here. And while this is a joyous time of year, it’s also filled with stress due to unrealistic expectations we put on ourselves to create the perfect celebration. Here are five simple tips to help you get through the season with your sanity intact… The holidays are here. And while this is a joyous time of year, it’s also filled with stress due to unrealistic expectations we put on ourselves to create the perfect celebration. Here are five simple tips to help you get through the season with your sanity intact.

And if you’re looking for a book to warm up those cold winter nights, why not try Endless Chase, the final book in the sizzling Dalakis Passion vampire series. Since the night her parents were brutally murdered, Katya Markova has been driven by a dark quest for vengeance. When her search for the killers leads her to the heart of Transylvania and the ancestral home of the Dalakis, she hopes to finally take her revenge and put her horrific memories and the souls of her parents to rest. Then she meets the mesmerizing Chase Deveraux, and his intensely passionate touch threatens to weaken her resolve as she surrenders to his sensual promise.

With his life in disarray, Chase has retreated to the remote castle of the Dalakis clan to sort things out in isolation, but instead is inexplicably drawn to the mysterious Katya. Instantly spellbound by her tough warrior exterior and compelling beauty, Chase finds that Katya captivates him like no other woman has before—until he learns of her dark intent and is torn between his own needs and those of his family.

Because Katya is enmeshed in a world of lies and deceptions, and has brought that world to the Dalakis doorstep. As their unquenchable passion spirals to incredible sensual heights, Chase and Katya will be forced to make a choice, one that could destroy the Dalakis clan for all time or unite the desperate young lovers for eternity…

This is a revised edition of a previous published book.

Katya was everything he’d been missing. Everything he couldn’t have, a voice reminded him. Ignoring the voice in his head, he deepened the kiss. Just one taste. One kiss wouldn’t hurt either of them.

Her fingers edged up his arms and around his neck, tugging him closer. He dipped his tongue into her mouth. She tasted like mint, yet the tang of something dark and mysterious lingered. Her tongue stroked his and he groaned, giving himself over to the deep pull of attraction that flowed between them.

Chase didn’t know how long they stood there in the shade of the trees, mouths melded in a mind-numbing kiss. The sun peeked out from behind the mountain, rising higher in the sky. The heat of the morning soaked through his heavy coat. He slanted his mouth over hers, again and again, until they were both breathless, their lungs pumping hard.

Katya was the first to pull away. She looked stunned as she brought her fingers to her lips, touching them. Her mouth was swollen and damp. Chase reached for her again, but she stumbled backward. “I have to go.”

“Will I see you again?” The words were out of his mouth before he could stop them. The last thing he needed was to get involved with a woman, especially a complete stranger. He had enough problems in his life right now. That was part of his reason for coming here early. He needed time to think, time to sort out his future. But the thought of not seeing her again ate at his gut like acid. He had to see her.

“I don’t know. Maybe. Probably.” Her words tumbled, one over another. She looked as stunned by her reply as he’d been by his question. Turning, she raced into the woods. He took a step after her, but she’d already vanished.

N.J. Walters is a New York Times and USA Today bestselling author who has always been a voracious reader, and now she spends her days writing novels of her own. Vampires, werewolves, dragons, time-travelers, seductive handymen, and next-door neighbors with smoldering good looks—all vie for her attention. It’s a tough life, but someone’s got to live it.