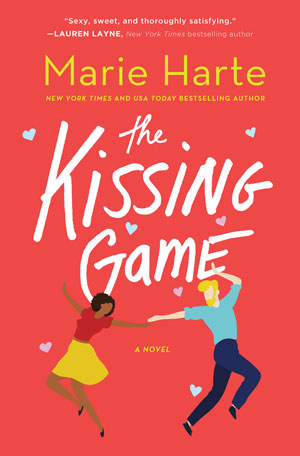 Rena Jackson is ready. She’s worked her tail off to open up her own hair salon, and she’s almost ready to quit her job at the dive bar. Rena’s also a diehard romantic, and she’s had her eye on Axel Heller for a while. He’s got that tall-brooding-and-handsome thing going big-time. Problem is, he’s got that buttoned-up Germanic ice man thing going as well. With Valentine’s Day just around the corner, Rena’s about ready to give up on Axel and find some other Mr. Right…

The Kissing Game gets a 5 Heart, Recommended Read review from Michele R.! Click here for the review.

Rena Jackson is ready. She’s worked her tail off to open up her own hair salon, and she’s almost ready to quit her job at the dive bar. Rena’s also a diehard romantic, and she’s had her eye on Axel Heller for a while. He’s got that tall-brooding-and-handsome thing going big-time. Problem is, he’s got that buttoned-up Germanic ice man thing going as well. With Valentine’s Day just around the corner, Rena’s about ready to give up on Axel and find some other Mr. Right.

At six foot six, Axel knows he intimidates most people. He’s been crushing on the gorgeous waitress for months. But the muscled mechanic is no romantic, and his heart is buried so deep, he has no idea how to show Rena what he feels. He knows he’s way out of his depth and she’s slipping away. So, he makes one crazy, desperate play…

Rena watched her go, so happy for her cousin.

She looked around at the many smiling faces of those she’d come to care for, seeing the love that gathered them all together.

So much love brought tears to her eyes. Most were from happiness, but a few came from the knowledge she’d arrived solo. Again. Never with a plus one. For the past year, she’d been too busy getting her new business together to have time for a man. And she wanted one. No question.

Too bad the one she wanted moved at the speed of a glacier.

Axel Heller had no trouble making time for those fists of fury, but God forbid he ask her out or anything. She might have asked him, but the rare moments they had any time together at Ray’s lately, Axel turned mute, disappeared behind a menu, or got sucked into conversation with J.T. and friends, the guys who worked at Del’s garage.

She sighed again, wondering how she’d be described as a character in one of her much-loved romance books. Desperate? Pathetic? Cute but lonely? A future CLA—Cat Lady of America? Hmm. Maybe I should get a cat.

J.T. saw her and smiled. He left his fiancée to join Rena by the food and glanced down at the plate she was holding. “That’s a lot of corn dogs.”

She forced herself to stop moping and laughed. “They’re Del’s. I’m just holding them while she hits the bathroom again.” Past the birthday parents, Rena spotted her uncle arriving with his own fiancée in tow. Geez. Was anyone left who hadn’t coupled up…besides Rena and the one-year-old?

For a woman who lived with a romance book under her pillow, another on her nightstand, and hundreds more filling several bookcases, to say Rena was a romantic was like saying Picasso had toyed with painting. Rena read romances. She watched them on TV. She saw them play out with friends and family and always offered helpful advice. She ate, drank, and slept with the idea of happily ever after in her blood.

His expression softened, and he wrapped a huge arm around her shoulders. The big lug stood a good head taller and took after his father in size if not looks. Unlike Uncle Liam, J.T. had the same medium-brown skin Rena did. His sister, Del, on the other hand, had ash-blond hair in funky braids, sleeves of tattoos covering white-girl-with-a-tan arms (J.T.’s description, not hers), and gray eyes. They didn’t look much like family, but the Websters were thick as thieves. That Rena was included in their dynamic somewhat soothed the part of her always wishing for a forever love of her own.

“Well, it’s not for lack of looks.” J.T. smiled. “You look prettier than Aunt Caroline every day. But don’t tell her I said that.”

Rena’s and J.T.’s mothers had been sisters, both always trying to one-up the other. J.T. thought it amusing to continue the tradition of teasing Rena’s mom. Rena chuckled. “I won’t let you get her started. You know Mom’s vain.”

“But still beautiful. Looks just like Bridget.” His own mother. J.T. looked over at his father. “He’s been talking more about her. It’s been nice.”

“Good.” Rena knew her uncle had loved deeply, and when Aunt Bridget had passed away, he’d grieved for her for years. Until he’d met a special McCauley. Like daughter, like father. “So he and Sophie are seriously getting married on Valentine’s Day?”

Uncle Liam would be getting married on Rena’s favorite holiday, enjoying his honeymoon on the most romantic day of the year. Rena would be nursing a hot cup of tea, eating chocolates she’d buy for herself, and binging on Hallmark movies while she wallowed in self-pity.

“Yep. I can’t believe it.” J.T.’s large grin showed his pleasure at the thought. “You going to bring a date to the wedding?” He paused, still looking at his dad. “Heller’s back in town to stay.”

“Don’t talk to me about that man,” she fumed. “Heck. The reason I’m single is probably because he’s been keeping everyone away from me.” He wouldn’t ask her out, but he didn’t like anyone else paying attention to her. The big, sexy Viking. No, the big, unsexy jerk.

J.T. turned to regard her with concern. “Now, Rena, Heller’s not like that.”

Blaming her loneliness on Axel felt better than thinking her inability to attract a man might be her own fault. Heck, she couldn’t remember the last time anyone had flirted with her. “Oh? He comes into the bar and smiles at me, then glares at everyone else.”

J.T. grunted. “Good. I don’t want you dating the guys who hang out at Ray’s anyway.”

“You hang out there.”

She shook her head. “You make no sense.”

Caffeine addict, boy referee, and romance aficionado, New York Times and USA Today bestseller Marie Harte is a confessed bibliophile and devotee of action movies. Whether biking around town, hiking, or hanging at the local tea shop, she’s constantly plotting to give everyone a happily ever after. Visit marieharte.com and fall in love.

3 Responses to The Kissing Game by Marie Harte