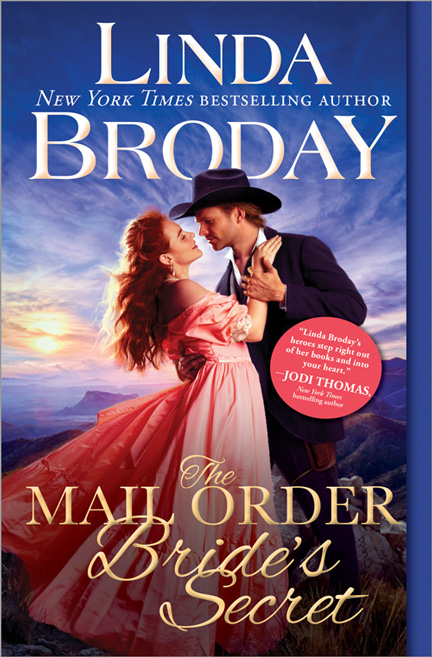 When the West was wild and man’s law favored the few, these extraordinary women could be found…in the heart of an outlaw.

When three young children show up on outlaw Tait Trinity’s doorstep, he knows he can’t help them—a wanted man has no business raising kids. And yet he can’t bring himself to turn them away. At a loss, he sends for the mail order bride he’d been writing to, hoping the demure dressmaker will be the answer to his prayers… When the West was wild and man’s law favored the few, these extraordinary women could be found…in the heart of an outlaw.

When three young children show up on outlaw Tait Trinity’s doorstep, he knows he can’t help them—a wanted man has no business raising kids. And yet he can’t bring himself to turn them away. At a loss, he sends for the mail order bride he’d been writing to, hoping the demure dressmaker will be the answer to his prayers.

Melanie Dunbar is nothing like the bride Tait was expecting. She’s rough and tumble…and hiding an ulterior motive. Dangerous men have taken her sister hostage, and if Melanie wants to see her alive, she’ll have to betray her new husband. There’s only one problem—the more time she spends with Tait, the more she comes to care for him. Yet as the noose begins to tighten, Melanie will have to make a terrible choice: save her sister…or the man she loves.

Melanie took in the small town, awash in the dying, plum-colored light, and at first glance found it welcoming. Then she turned her attention to the man, this outlaw she’d corresponded with for the past month. Had manipulating Luke Legend been worth it? On the outside, Tait Trinity appeared every bit the lethal outlaw she’d once glimpsed aboard the train he was robbing. He’d had a bandana covering his face then, of course, but she’d never forget those eyes—hard and gray, like chips of ice.

What kind of a husband would he be? Only time would tell.

She took in his tall, lean figure, the long hair that touched his shoulders, and lingered a second longer than necessary on those gray eyes that now reminded her of quicksilver in the fading light. He was a squinter, as evidenced by the crinkles around the corners of his eyes, and at the moment his eyes lacked the hardness she saw too often in men living on the lawless frontier. Yet, like quicksilver, she thought they might change very abruptly under certain situations.

Tait Trinity could buy her ticket to freedom. She took in the heavy gun he wore in the holster strapped around his lean hips.

Suddenly her confidence slipped a notch. It had been one thing to talk about what she had to do. It was quite another coming face-to-face with the man whose life she meant to destroy. He wasn’t some dumb hayseed—he was a killer.

Her pulse raced and her palms sweated under Tait’s piercing gaze that seemed to notice every detail about her.

One of the boys jostled Tait’s elbow, and, shaking herself, she focused on the children. He hadn’t mentioned having children to raise. This would complicate things. She knew nothing about the care of children, and they were noisy and cried at the drop of a hat. Frankly, kids scared her, and she’d avoided any contact with youngsters as a grown woman.

Before she could open her mouth, Tait put a hand on each of the boys’ shoulders, drew them forward, then lifted the small girl into his arms. “Miss Dunbar, meet my niece and nephews. The boys are Joe and Jesse, and this little one is Becky.”

Only his kin. Melanie relaxed. They must live in Hope’s Crossing with their parents.

She smiled. “Hello. It’s really nice to meet you.”

Tait captured her gaze and held it longer than was needed before he lifted the corner of his mouth in a sudden, crooked grin that almost vanished before she saw it. “I’m the children’s guardian. Their parents were killed, leaving them with no one. I should’ve let you know before you came all this way, but frankly I’ve been a tad busy adjusting to this arrangement myself.”

Tait scowled and glanced around, motioning to two women. He spoke in a low voice to them, after which the women collected the children and moved off toward a row of houses. He picked up Melanie’s heavy bags as though they weighed nothing. “Come with me to the hotel, Miss Dunbar.”

She nodded and fell into step with him. They didn’t stop until they reached a comfortable office in the Diamond Bessie Hotel. “We can borrow this room.” Tait removed his hat, laid it on a table, and closed the door. Streaks of blond shot through his caramel hair. No one had told her how handsome he was.

Painfully aware of his scrutiny, she swung to glance at the room, admiring the blue velvet sofa, chairs, and pretty wallpaper. “It’s nice.”

“I didn’t mean to mislead you, and I’m sorry if you feel that way.” He paced in front of a large desk that had a painting of a snow-covered pasture behind it. “Have a seat.”

Melanie removed her bonnet, but instead of sitting, she wandered to the window and pushed the thin curtain aside. “I wish I had known before I made the trip. I didn’t sign up to be a nursemaid. This changes things.”

Tait dropped into the chair behind the desk and let out a heavy breath. “What’s the problem? Don’t you like kids?”

“It’s not that. I’ve never been around children and know nothing about their care.” She let the curtain fall back into place and got comfortable on the sofa. She stared directly at him and gave him a warm smile as though they were discussing the weather. “I will not be a nanny, a maid, a cook, or a laundress, although I’ll do my fair share.”

Confusion crossed his face. “So, what are you saying exactly?”

“I came to be your wife, not to have you pawn your niece and nephews off on me and go your merry way. I’ve heard stories of widowers who advertised for brides with nothing more in mind than to dump a bunch of kids on them and take off for good.” She removed her gloves. “If you intend that, then our business is concluded, and I’ll leave on the next stage.”

“Hold on a minute, missy. That was not my intention.” He paused, and the guilt in his expression told her that had been exactly why he’d sent for her. He straightened from his slouch. “Okay, maybe that might’ve been the reason I telegraphed you a week ago, but the situation has gotten better. What if the two of us work together as a team? We’d bear the load fifty-fifty.”

Melanie narrowed her gaze at him. “You won’t ride out at the first opportunity and stay gone for months at a time, leaving me stuck here with the children?”

“I give my word.” He rose and perched on the corner of the walnut desk, rolling his neck. There was something he still wasn’t saying. She waited. Tait cracked his knuckles. “What I have to tell you next may be the deal breaker.”

At a young age, Linda Broday discovered a love for storytelling, history, and anything pertaining to the Old West. After years of writing romance, it’s still tall rugged cowboys that spark her imagination. A New York Times and USA Today bestselling author, Linda has won many awards, including the prestigious National Readers’ Choice Award and the Texas Gold. She resides in the Texas Panhandle where she’s inspired every day.