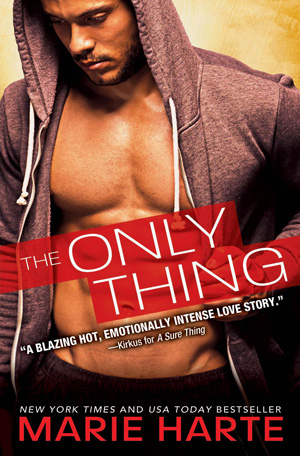 From Marie Harte, author of THE ONLY THING: Saying goodbye to the Donnigans was bittersweet. I’d had them in mind since before I had my first McCauley Brothers book published four years ago. J.T. Webster and Hope Donnigan have always held a special place in my heart. I mean, who wouldn’t love a guy named after… Well, read the book and find out. And don’t miss the fabulous contest either!

“In this newest offering from Ms. Harte, her dazzling characters shine brightly, and their beautifully crafted love affair does not disappoint!!” Misty, Red’s Romance Reviews

“I’ve never read a couple that was so completely devoted to each other and yet so in denial that they were in a relationship. It was pretty funny how these two dated on their non-dates. And lets not forget to mention how hot they were. Holy cow did this author steam up the pages with these two!” Mindy Lou’s Book Review What do you do when a “fake” relationship is so much better than the real thing?

Hope Donnigan is finally getting her life together. She’s working a job she likes, has some amazing friends, and is steering clear of Mr. Wrong. Now if only she could get her mother to understand that. Maybe a hot tattoo artist from the other side town is just the ticket to teach her mom a lesson.

J.T. Webster fell for Hope months ago at his sister’s wedding. So when she propositions him to be her fake boyfriend to get her mother off her back, he’s all in. The only problem is J.T. had no idea their pretend relationship would be better than anything real he’s ever had…

Hope couldn’t find it in herself to blink, focused on God’s gift to womankind. Her aunt’s invitation to dinner had come at the perfect time, giving Hope an excuse to avoid her mother’s weekly nagathon. Since her idiot older brothers had hooked up with the loves of their lives, her mother had deemed Hope fair game again. So much for their pleasant détente, where Hope stopped blaming her mother for her many issues and Linda Donnigan stopped getting on Hope for breathing wrong.

Yet Hope hadn’t anticipated seeing J.T. Webster. He hadn’t been at the last two dinners Aunt Sophie had invited her to. “Greg?” she asked, her mind on other things.

Like how incredible J.T. filled out a simple T-shirt and jeans. The man had the prettiest chestnut-brown skin. She could stare at him for hours.

Liam was white, and she knew J.T.’s mom had been black. She also must have been gorgeous, because J.T. had his dad’s height and brawn, as well as the face of an angel who liked to sin. A lot.

She swallowed a sigh and continued to visually eat him up, wondering if the size of his hands and feet could be correlated to the size of other things.

God, get your mind off sex, Hope. His father is here! Aunt Sophie is here! And you’re off men, remember?

Geez, she’d seen Greg and J.T. just last week. “Oh, no. No problems on that front.” To Liam, who studied her a little too intently, she explained, “Ex-boyfriend. A jerk I ran into. No biggie.” She shot J.T. a look, pleased when he kept quiet.

Last weekend, Greg, a guy she hadn’t dated or seen in over four months, had accused her of using her brother to bother him. But Hope hadn’t thought about Greg the Cheater since she’d dumped him, so she knew her brothers couldn’t care less about the guy. When Greg had tried to get a little gropey at the park, she’d taken him down, courtesy of the self-defense classes her brothers taught.

J.T. hadn’t had to do more than watch her take Greg out. She’d been so proud of herself… when she’d been able to tear her imagination from what J.T. would look like naked.

So sad those images replayed themselves over and over again.

“Right.” Liam stared from her to J.T., a question in his eyes.

“So who’s pregnant?” she asked, hoping to shift attention away from herself.

Rena squealed. “Del is! A tiny little bun in her McCauley oven.”

Del looked embarrassed, which was funny, because Del could out swear the mechanics she bossed around on a daily basis and took woman power to the next level. The woman had arms covered in tattoos, funky ash-blonde braids, and icy gray eyes that seemed to look through, and not at, a person.

Hope could see a faint resemblance from brother to sister despite their different skin tones. Both J.T. and Del had the same shape of their eyes and stubborn chins, just like their father. Only someone as obsessed with J.T. would have noticed that, she realized, and felt like a moron for being so enthralled with the man.

Since she hadn’t yet greeted her aunt, Hope started to turn and found J.T. suddenly in her way. “Oh, sorry.”

He put a hand out to stop her from bumping into him. And sweet baby sexy, she felt the touch go from her arm all the way through her body, centering between her legs. Oy.

“I am a big fan of Marie Harte. Oh Boy, she did not disappoint with this book. Loads of banter between all the different characters and loads of sex.” Sandy N.