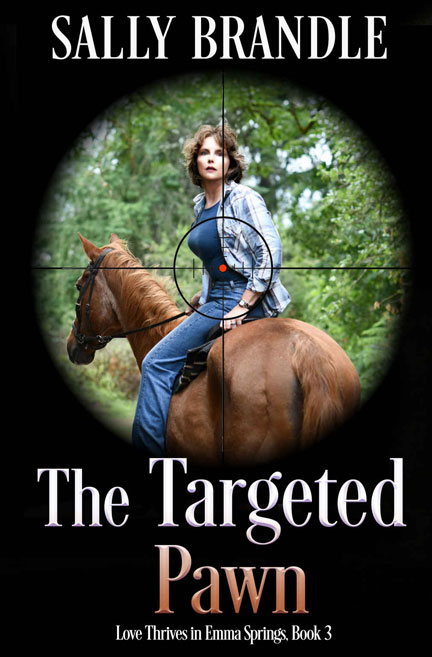 Threats forced her to flee Seattle. Honor binds him to Montana. A second chance at love tethers them together.

In The Targeted Pawn by Sally Brandle, Elon Hardy’s romance skills are rusty after a loveless marriage ends, but upon meeting hunky rancher, Rane Calderon, sparks blaze hotter than her welding torch. To support her collegiate sons, she’s determined to acquiesce to the bullheaded, female-phobic boss until her divorce finalizes from her deceitful husband.

A woman Rane trusted ruined his life, and at forty, he won’t be fooled again. Blisteringly mad he’s hired a female bearing a man’s name, he fights attraction for the curvy, determined brunette while thwarting efforts to build a private prison atop his Blackfeet ancestors’ burial ground.

Can Elon and Rane realize love doesn’t have a “best used before date”?

Hope. Second chances. Self esteem building. I can’t imagine the thought of life without those elements. Neither can my hesitant-to-courageous heroines. And for my latest hero, ancestry. Finishing touches on The Targeted Pawn took me in a unique direction, as it features a hero whose grandmother belonged to The Blackfeet Nation. A man I know in real life wished he knew his Native American heritage, but his grandmother would never divulge details. Flipping that scenario, I created a character proud to honor his Blackfeet legacy. For accuracy, I sought guidance from a female acquaintance who is from The Blackfeet Nation of Montana, and a man from the Oglala Lakota tribe who owns Native Horseman in South Dakota. On short notice from my doing, both corrected terminology and Tom offered insight into how the banter flows between him and his friends. I strive for accuracy and hope I discussed with them all the pertinent and culturally sensitive scenes in my book. The added bonus includes knowing Thomas Smittle, a person willing to offer me guidance on horsemanship, who also happens to have acted in The Mustang (2019). Not a movie for children, but Tom went thru the program pairing inmates and wild mustangs and it brought him to the awareness that he had a gift of working with horses. The Mustangs of America Foundation supports the Mustang Inmate Training programs by providing equipment and other needs. The low rate of recidivism is reason for me to support them. Who’d of thought writing a clean (no intimate scenes) romantic suspense story would’ve taken me down this path? I’m certainly glad it did, as I learned how a prison program can have positive life-changing impacts. Here’s an excerpt from my latest book, The Targeted Pawn:

Fired before she started? No, the Bull Boss couldn’t do that to her. Elon gripped the underside of the table edge, willing him to give her a trial run. One stinking opportunity to prove she wasn’t as worthless as Tim maintained. She bit her lip. There wasn’t enough cash to return to Seattle. “I drove here in good faith. Give me a chance, Mr. Calderon.”

Rane took in a deep breath, then let it out slowly. “You did me a favor helping my bull, so I’ll do the same.” He folded her letter and rested his fist on it. “Wasn’t expecting to accommodate a woman.” His glance flicked outside and back to her. “There’s an unused bedroom and attached bath down that hall.” His face softened for a split second before he flipped his thumb over his shoulder. “You may bunk in my grandma’s room. She didn’t handle stairs either.”

She’d handle him all right. Her fingers relaxed. “Sounds ideal. You have an MIG welder?”

He glanced around the kitchen, as if noticing the mess for the first time. “Yup. Welding can wait until tomorrow. Start by feeding the men at five o’clock. Plenty of grub in the storeroom through the door by the sink.”

“I’ll fix a hearty meal.” She palmed her locket. “I don’t have a cell phone. May I call my sons to tell them I arrived?”

“House phone’s on my desk in the far corner of the living room. No incoming calls after ten at night, Montana time. Anything else?”

“When do you cut checks?”

“On the fourth and the twenty-eighth.” He rifled through the stack and pulled out a photocopied timesheet. “Normally the men hand in hours three days earlier. I can take yours that morning.”

“Thank you. I can work through the weekend to catch you up.”

Angel needed an advocate. “Just tell me where to park my car and oh…I, ah, have a dog.”

“Your car’s ok where it’s parked. Didn’t realize you brought a guest,” he said, in a voice turned soft as suede.

The calm before the storm? “Hadn’t planned to adopt a pet. A jerk tossed her from a truck on the highway an hour ago.” She clenched her fist. “I won’t abandon Angel. That’s what I named her.”

His boots scraped the floor as he pulled them in. He rose to his full height. “Angel can bunk inside, or I’ll find her a temporary doghouse.”

“Dogs never do. If she needs kibbles, ask for Fred. He’ll find someone headed to town.”

The man did have a heart. For the first time today, she smiled. “Thank you. I’ll find something to feed her tonight,” Elon said.

Rane leaned over her, close enough to show dark stubble on his perfectly sculpted jaw. The guy’s black lashes appeared thick as paint brushes. His eyes glowed a deep shade of russet.

Flutters swirled in her belly. She blinked several times and leaned back.

With one fist braced on the papers, his chest stiffened into a shield. “Animals I trust, Ms. Hardy. Women are another story. A month’s trial, then we’ll talk.” He straightened and walked out, leaving a trail of spice-scented annoyance.

So much for the misconception of a kindly old rancher. Nope. Her fortyish boss possessed the ability to morph into a hardened commander with one scowl from his squint-eyed, condemning looks.

She fingered the buttons on her blouse. How gracious of him to give her a month’s trial run. The divorce might take a year.

Rescuing Angel had helped win him over. They both needed a home until she got the settlement check, and she’d use the pup’s plight again if necessary. She removed a crusty saucepot from the sink. Stacking dirty fry pans cleared a space under the faucet to scour a water bowl for her dog.

Stagnant air surrounded her. “Uggh.” The place needed an open window and a stiff breeze. A metal ring hung from the middle of the lowered roller shade. Tugging it sent the blind snapping upward. She shoved open the pane of grimy glass on a window that faced her car. Dust particles danced in the filtered sunlight. Outside, the men gathered in the corral around the bull.

She collected Rane’s papers, crossed into the living room, and dropped them onto a desk capable of seating six. Angel would think she’d been abandoned again, but first she’d phone her boys.

Brandon didn’t have late classes. She punched in his number and smiled to hear his voice. “Hi. Hoped to catch you. Made it to the beautiful ranch. Cowboys and cattle.”

She couldn’t agree more but wasn’t going to bad-mouth Tim. “Did Jeremy tell you the cost of his book?”

The shameful practice of overcharging for a college book hadn’t ceased. “I’ll send him the money next week. I’d prefer you concentrate fully on schoolwork.”

“Okay. I’ll tell him. Thanks for leaving the freezer full.”

“You’re welcome. Tuesday’s my first payday. It won’t be a windfall, but we’ll manage. I’m sorry about the divorce drama.”

“We’re all better off without Dr. Deceitful judging our every move. We think he’s gone off the deep end.”

“Let’s not jump to conclusions. I’ll open a bank account tomorrow so I can transfer money to you, okay?”

“Yeah.” He cleared his throat. “Please be careful. Did you smash your phone?”

Her eyes teared from pride of their protective instincts and sadness at the reason. “I did. You boys mean the world to me. I’ll be back in Seattle soon. Love you.”

Her stalwart Brandon sounded worried. The handset wobbled into the cradle. “Damn you, Tim,” she whispered. Multi-award winning author Sally Brandle weaves slow-burning romance into edgy suspense stories. Sally left a career as an industrial baking instructor to bring to life stories motivating readers to trust their instincts. Her rescue Aussie is her companion during long spells of writing or afternoons spent riding on the wind with her nearly thirty-year-old Quarter Horse. Sign up for her newsletter at www.sallybrandle.com for freebies. The Hitman’s Mistake opens her Love Thrives in Emma Springs series of stories (without intimate scenes). Torn By Vengeance, Book 2, continues showcasing friendship, courageous women, and the men who deserve their love. The Targeted Pawn, Book 3, features a second chance for a life filled with love for humans and their furry friends.

One Response to The Targeted Pawn by Sally Brandle