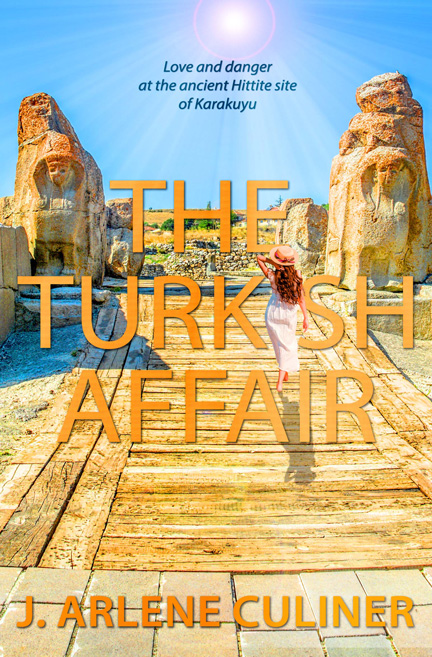 Danger at the Ancient Hittite Site of Karakuyu

Priceless artifacts are disappearing from the ancient Hittite site of Karakuyu in Turkey, and the site director has vanished. Called in to solve the mystery, archaeologist Renaud Townsend is hindered by both his inability to speak the language and the knowledge that the local police are corrupt. His attraction to translator Anne Pierson is immediate, although he is troubled by her refusal to talk about the past and her fear of public scandal. But when murder enters the picture, both Anne and Renaud realize that the risk of falling in love is not the only danger. Published by The Wild Rose Press

When archaeologist Renaud Townsend discovers translator Anne Pierson wandering around the ancient Hittite site of Karakuyu outside of official hours, his interest is aroused. He likes the way she moves, the swing of her hair, and the tilt of her eyes. But priceless artifacts have been disappearing, and he knows he shouldn’t be attracted to a woman he knows nothing about.

Anne Pierson has been hiding her past for years, moving from one country to the next. Now settled in Turkey and working as a translator, she has given up dreams of romance — what man would be interested in a woman once notorious for her extra-marital affair with an embezzler? But after meeting Renaud Townsend, all thoughts of self-preservation vanish. Her fingers long to reach out, caress the hardness of his chest, and the lazy tones of his voice turn her butter soft.

But no matter how strong the attraction between Renaud and Anne, a short fling is out of the question. Here in Eastern Turkey, religion rules daily life, and Anne’s bad reputation can put them both in danger.

He was there an hour later, waiting in the shadows of the main alley. Just sitting, sending small stones sliding across the cobbled surface, the soft dull pings echoing through the empty passageway. Anne had expected to run into him again, although she couldn’t say why. There he was, perched on a rock, his back propped lazily against a crumbling wall, the long, muscular legs stretched out in front of him and crossed at the ankle. Just as though he had nothing better to do in life than flick stones.

Was he waiting for her? Probably. Why? A million fanciful reasons raced through her head, were followed by a million objections. Calm down. More than likely, he was just checking up on her, making certain she wasn’t hacking stone pillars to bits, or kicking down ten-foot walls. Yes, that was more his style.

The penetrating blue eyes were examining her again as she approached with the group. Perhaps if she just ignored him, walked past, she could avoid any further confrontation.

No such luck. When they were only yards away, he rose to his feet and languidly, surely, strolled over. Anne forced her eyes away from the length of the sinewy torso and tried to squash the sharp little thrill rippling under her skin, or to minimize its intensity.

“Visit finished?” He came to a halt.

It was impossible to avoid eye contact. He was so near, mere inches, a breath away…one of those people who stood too close. Was that his playboy body language coming into play? She took in the broad forehead, square jaw, and sculptured cheekbones. He wasn’t conventionally good-looking—his features were too uneven, too rugged—but, strangely enough, he was one of the handsomest men she’d ever seen. And the way he moved warned her he knew his appeal.

“Visit finished,” she confirmed and waited for him to step to one side. He’d put himself directly in her path. If she walked around him, she’d look downright silly. Out of the corner of her eye, she saw Asım and the tourists continuing on without her, heading toward the exit. First line of defense down. Or was it the second?

He studied her, and she controlled the muscles of her face, kept it calm-looking, confident, as though she weren’t in the least bit flustered, although a tumult of emotions was struggling with her self-control. This man in front of her evidently wasn’t having the same problem. He was merely impassive, and that irked her beyond all logic. She had a wild urge to throw him off his guard, provoke him, but didn’t know how to begin.

About the Author   Writer, photographer, social critical artist, musician, and occasional actress, J. Arlene Culiner, was born in New York and raised in Toronto. She has crossed much of Europe on foot, has lived in a Hungarian mud house, a Bavarian castle, a Turkish cave-dwelling, on a Dutch canal, and in a haunted house on the English moors. She now resides in a 400-year-old former inn in a French village of no interest and, much to local dismay, protects all creatures, especially spiders and snakes. She particularly enjoys incorporating into short stories, mysteries, narrative non-fiction, and romances, her experiences in out-of-the-way communities, and her conversations with strange characters.