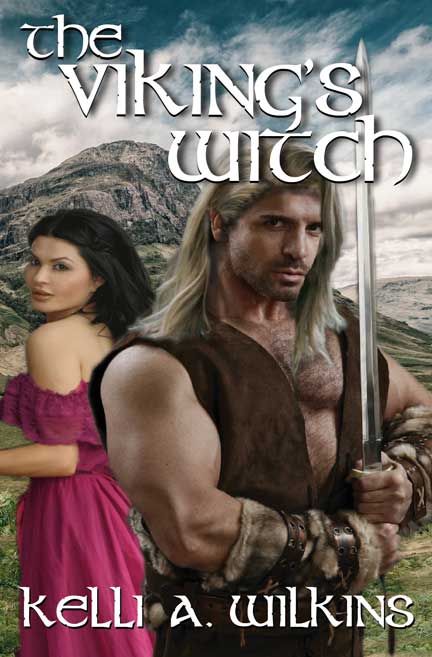 Behind the Scenes: The Viking’s Witch (A Historical Paranormal Romance) by Kelli A. Wilkins

Behind the Scenes: The Viking’s Witch (A Historical Paranormal Romance) 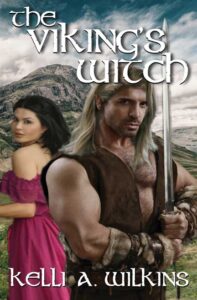 Today I’m blogging about one of my favorite historical romances, The Viking’s Witch. The book is set in Celtic Scotland and blends a sensual love story with adventure and paranormal elements.

I loved everything about writing this book—the characters, the setting, the plot—and readers and reviewers loved it, too. When the book was originally published in 2012 by Medallion Press, it won an IPPY award for best historical romance e-book.

I’ve written a few detailed blogs about the characters, setting, research, the gritty details, conflicts, violence, and even the use of magic in the book. I won’t rehash all that here (you can read the other blogs in the blog section of my site: https://www.kelliwilkins.com/blog , but I will talk a bit about the origin of the book.

Like many of my romances, the idea for the story popped into my head one morning. I know it sounds strange, but the book came to me in a dream. It played out like I was watching a movie. When I woke up, I grabbed a pen and paper and wrote down everything I remembered. It took me about two hours, and from there I created an outline and started writing.

I had to do a lot of research while I wrote the book. I knew the story took place in Scotland, but I wasn’t sure where—or when. I needed to set the book in a place where the Vikings traveled in their early years of exploration, but it had to be an isolated location. After much back-and-forth, I decided on the Orkney Islands, then I had to decide on which island to set the story. (There are 70 different islands, but only 20 are inhabited.)

After I knew the setting, I did more research to learn what life was like in that time period for Odaria and Rothgar. I had to make the details realistic for the characters and the readers. Once I got a feel for what everyday life was like for each of them, I weaved the details into the story.

One way I did this was to have Odaria ask Rothgar questions (How did Norsemen travel so far across the ocean? What are their ships like?) and address the differences in their backgrounds. Rothgar also comments on how things are different on the island compared to his home and is proud to teach Odaria about his Nordic culture.

When writing, I also faced another big challenge: technically, Odaria and Rothgar would have been speaking different languages and would have trouble communicating. So I had to find a clever way for them to understand each other. In essence, I had to blend their two cultures together in a way that flowed with the story.

The opening scene is very powerful, and it was one of my favorites to write. When we first meet Odaria, she is about to be burned at the stake for being a witch. Her fellow villagers have turned against her, accused her of murder, and she’s been betrayed by everyone she knows. It’s a very dark time for her, and although deep down she is afraid, she doesn’t show it.

Instead, she calls down a curse on the villagers, and seconds later, screaming “demons” appear out of the darkness and capture most of her tormentors. Odaria is saved from the pyre—only to find herself facing another big problem—hordes of Norsemen have invaded the island.

In the beginning of the story I deliberately kept the truth about Odaria’s “abilities” vague. Did she really conjure up the Viking warriors who unwittingly saved her from certain death? Or was it all a coincidence? I wanted readers to follow the story and wonder “does she have abilities or not?” Is Rothgar right when he suspects Odaria is using trickery and manipulating circumstances to scare people into thinking she’s a witch?

Over the course of the book, Odaria never denies being a witch. She warns Rothgar not to cross her or she’ll hex him. Rothgar laughs at her threat. He calls her “my little witch” and makes fun of her… For a while.

Later, Rothgar needs Odaria’s help and tells her to prove she has magic powers. Although reluctant, Odaria doesn’t disappoint. After a few highly charged scenes, readers and Rothgar learn the truth about Odaira’s abilities. I loved showing readers (and Rothgar) Odaria’s powers of clairvoyance, telekinesis, and psychometry. The scenes that included the “magic” elements were a lot of fun to write.

Rothgar and Odaria are my favorite historical romance couple. Odaria is strong-willed and doesn’t take any nonsense from Rothgar. Although she’s tough and feisty, Rothgar uncovers a vulnerable, soft side to her. And while Rothgar appears gruff and violent on the outside, underneath he’s really a gentle and sensitive man. Together, they make a pretty good team. There’s lots of push/pull between them and plenty of hot love scenes.

If you love historical romances, paranormal romances, or romances filled with drama, emotional rollercoasters, and danger, you’ll want to read The Viking’s Witch. I’m happy to say readers and reviewers fell in love with Rothgar and Odaria as much as I did.

Here is the summary and book links:

About to be burned at the stake by her fellow villagers, Odaria does what any betrayed witch facing certain death would do. She calls down a curse. Within seconds, rampaging Norsemen raid the village, capturing everyone except her.

But her reprieve is short-lived, and Odaria lands in the clutches of the Norse leader Rothgar. Can she remain true to herself and fight her growing attraction to this domineering man, or will she fall under his influence and be used for his ambitions?

After Rothgar witnesses Odaria’s powers firsthand, he strikes a bargain with her. The raven-haired beauty will use her magical abilities to help him with his quest in exchange for safe passage off the isle. But can this cunning woman be trusted, or is she using him to exact vengeance on her village?

Together they must fight bloodthirsty villagers, battle a mutinous band of Norsemen, find a missing Norse ship, and learn to trust each other…before time runs out.

I hope you enjoyed this “Behind the Scenes” look at the making of this sensual historical romance. I welcome questions and comments from readers and other authors. Contact me via the form on my site or on social media.

Her non-fiction tale, “The Dog That Wouldn’t Bark” recently appeared in the Chicken Soup for the Soul: My Hilarious, Heroic, Human Dog anthology.

In January 2021, Kelli published Journaling Every Week: 52 Topics to Get You Writing. This fun and innovative guide to journaling is filled with hundreds of thought-provoking prompts designed to get you writing about your feelings and emotions.