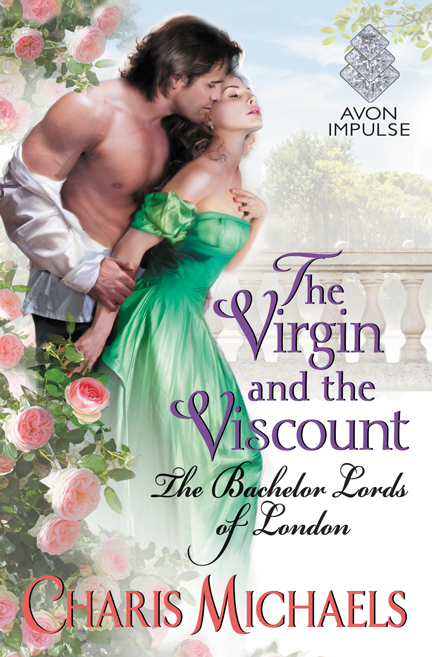 Crafting a Book Title with a Title: How The Virgin and the Viscount Got Its Name

The Virgin and the Viscount was the very first romance manuscript I ever wrote, way back in 2004, twelve years before it would reach the hands of readers.

Back then, it had a working title of, A Proper Scandal.

Back then, it was not connected to another book like it is now. Crafting a Book Title with a Title: How The Virgin and the Viscount Got Its Name

The Virgin and the Viscount was the very first romance manuscript I ever wrote, way back in 2004, twelve years before it would reach the hands of readers.

Back then, it had a working title of, A Proper Scandal.

Back then, it was not connected to another book like it is now.

Back then it was double the word count.

After I finished the first draft, it languished with its old title and original length until I was able to revise it into my Bachelor Lords of London series. To my delight, the revisions came easily, almost as if it belonged in the series from conception. Characters were combined.

What did not come as easily was giving the book a new title.

When an author names a work of commercial fiction like romance, she has the challenge of making quite a lot of people happy. Herself (obviously), her editor, the editors above her editor, the marketing and publicity teams, her readers, and simply the trending Zeitgeist.

Since Book I in the series contains the aristocratic title “Earl,” we felt second book should hit on the hero in general and mention his rank particular.

When these were all rejected and I was pulling my hair, I sent up: Stand and Viscount-ed, Down for the Viscount (personal favorite worst of the worst), Where the Viscount Ends, or Viscount on the Verge. And finally (pathetically): Don’t Viscount the Chickens Before They Hatch, which is what I felt I had done by writing this book into the series without deciding on a viable name at the onset.

Alas, we all know a title emerged and the book is called The Virgin and the Viscount. To arrive at this, I finally caught on to what my publisher seemed to want, the perfect balance of little bit sexy + a little bit catchy.

I began to search words that began with “V” (for the catchy) that might also be provocative (for the sexy). When I stumbled on “Virgin,” I thought, fingers crossed, I might I might have a winner—and I was right. I got the thumbs-up from my publisher, my writing buddies, and I even felt like my characters would approve.

Now, ahem, if I can only convince my mother. About THE VIRGIN AND THE VISCOUNT

In the next sparkling romance in debut author Charis Michael’s Bachelor Lords of London series, a proper viscount meets his match in a beguiling virgin who can’t help but break all the rules.

The Virgin
Lady Elisabeth Hamilton-Baythes has a painful secret. At the innocent age of fifteen, she was abducted by highwaymen and sold to a brothel. After two days, a young lord discovers her and enacts a brave rescue to get her out. Now she’s a grown woman, working to save other girls from the horror she saw that night and never forgetting the young man who rescued her.

The Viscount
Bryson Courtland, Viscount Rainsleigh has overcome an abusive boyhood, neglectful parents, and a bankrupt title to be one of the wealthiest noblemen in Britain. He works tirelessly to be upright and forthright and proper to a fault. Now he requires only one thing: A proper, forthright, proper wife.

The Unraveling
When a charity event puts Lord Bryson and Lady Elisabeth face-to-face, Bryson has no memory of the wounded girl of long ago. All he can see is a perfect candidate to be his future wife. Elisabeth has never forgotten him, but she worries that the brave boy who saved her so long ago has become a rich man with an unfulfilled life.

As a whirlwind courtship reveals the truth, Bryson must accept that Elisabeth is actually a shadow from his dark past, while Elisabeth must show that love is the noblest virtue of all.

Charis Michaels is thrilled to be making her debut with Avon Impulse. Prior to writing romance, she studied Journalism at Texas A&M and managed PR for a trade association. She has also worked as a tour guide at Disney World, harvested peaches on her family’s farm, and entertained children as the “Story Godmother” at birthday parties. She has lived in Texas, Florida, and London, England. She now makes her home in the Washington, D.C.-metro area.

Where to buy THE VIRGIN AND THE VISCOUNT