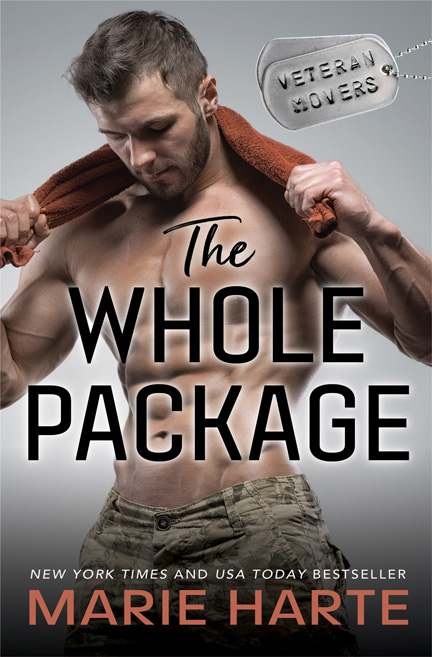 “Harte has created a rich world, populated by a couple with tangible chemistry and a supporting cast who help their relationship develop in unexpectedly charming ways… this is a strong series start that will have fans of mega-alphas eager for more. ” – Publishers Weekly Always the caretaker, former Marine Reid Griffith wants to help his brother adjust to civilian life…and help other former servicemen. What better way to utilize their brawn, discipline, and charm than a moving company that hires veterans? But although Reid prides himself on being strategic, he certainly doesn’t plan to fall in the spotlight of one brilliant—and beautiful—PR whiz…

PR expert Naomi Starr is determined to bring Vets on the Go! into the spotlight. But when she meets Reid, it might mean breaking her rule to never mix business with pleasure. Especially once she discovers that underneath Reid’s sexy rough-and-tumble exterior is a vulnerable man who just might need what she’s got to give.

She stared back at him, a little alarmed when he closed the distance between them.

Then he shocked her by pressing her up against the car, full-body contact. The heat of him singed her. Suddenly, instead of feeling annoyed or scared, she wanted him in the worst way. Whoa, momma.

Reid ran a finger down her cheek. “I’m not letting you drive home.”

His implacable resolve surprised her. “Seriously, Reid. I’m a big girl. I know how to get home without getting mugged.”

He didn’t move, and she didn’t want to think about him pressed so firmly against her.

She didn’t see herself winning this battle, and though it was ridiculous to think she needed rescuing from herself, she had to admit it felt nice to have someone looking out for her. “If you really need to drive me home, go for it. But you’re going to feel stupid tomorrow when all that testosterone in your system wears off.” She added in a lower voice, “Won’t let me go. Please.”

“I’d rather feel stupid than regret not helping you out.” He moved back to unlock the car and opened the door for her, then waited for her to settle in. After joining her, he followed her directions home.

Naomi could have been angry about it, but his need to protect softened something inside her. Something she’d need to firm up before dealing with the man again. Reid sat far too close. She could smell alcohol and the faint scent of cologne on him, and it went straight to her head. Hell, maybe she was a little loopy. She really needed to get something to eat.

They arrived at her home in Greenwood, a cute little bungalow she’d refused to sell, even after losing her job with PP&R. She’d worked so hard for her home and had finally gotten the house exactly as she’d wanted it

“You okay?” Reid asked as he parked.

Her purse was in his hands before she could grab it back.

He had her keys out and had already left the vehicle when she’d thrown open her door, only to have him help her out and up the sidewalk. A domineering yet polite gentleman.

He nodded at the house. “Nice place.”

“Thanks,” she said, grudgingly, loving the homey two-bedroom Craftsman. Dark purple with white trim and a tidy little porch, the house had plenty of room for her and Rex, should he deign to come home. Probably out catting around like half the men in this town, she thought…cattily.

She snorted. “I suppose you want to come in.”

“Just to make sure you’re okay.”

She rolled her eyes at him, but he ignored her. She heard his car beep, locked up tight, and she glared at him. If he had any intention of staying, she’d disabuse him of that notion right away. She watched him unlock the front door then step back to hold it open for her.

Since Rex didn’t greet her right away, she figured he was probably touring the neighborhood. With a little huff, she took the keys from Reid and walked inside. He closed the door behind them while she flicked on a light.

Huh. He’d noticed. What did that mean? That he had good recall or actually possessed an interest in her? And why did she care?

She nearly tripped again and swore, then kicked off her stupid heels.

“You want some water? I know I’m parched. It’s been a long day.” Reid stepped past her into her open living room that led by a dining area into her kitchen. She refused to follow him inside and instead massaged her aching toes.

He returned with a glass for her.

“Make yourself at home, why don’t you?”

He didn’t say anything and handed her the glass. She took a sip and handed it back. “There. Now go home, please. Because of you, I’ll have to get someone to take me to my car in the morning.” Though if she was feeling industrious, she could walk the short distance to get it herself.

His bossy attitude that had somewhat charmed her before now annoyed her. “No, thanks.” She watched him drink her water and grew even more steamed. “I’m not some silly little woman needing your help Reid. I’m not drunk or impaired in any way. I’m tired and my feet hurt.”

He gave a small smile.

“You find that amusing?”

He set the glass down on a coaster on her side table, and she hated that she couldn’t nag him about that either. “You’re cute when you’re mad.”

“And helpless, right?” She felt a little lightheaded, which  had nothing to do with exhaustion and everything to do with Reid. Around him, she felt more. Angry, annoyed, aroused. The three As of danger drawing nearer as he smiled at her distress. The bastard.

“Want me to help you, you poor, fragile thing?”

She could do without the smirk. “Yes, please,” she said, her voice sugary-sweet, then dragged him closer by the shirtfront, shocking him. “Isn’t this what you want? To take advantage of a helpless woman?”

“Oh, so now, because I’m a little aggressive, I’m not good enough for you.” She started to lose track of what she was saying, so close to Reid, to that firm chin with a hint of stubble, to that sexy smell of man and cologne, to the sheer breadth of him that seemed much bigger up close. Reid stood inches above her own height, their disparity even greater without her heels.

He tried to pry her hands free but stalled when he looked down into her eyes. “Y-you’re mad?” He sounded hoarse, his gaze moving slowly over her face and stilling on her mouth. “Hell,” he muttered.

“Yeah, I’m mad. You’re a menace, you know that?” Out of control and stirred to an angry passion by the man who refused to know she had her own mind, she yanked him down for an angrier kiss. The touch of his mouth under hers brought everything to a halt. An instant connection turned their burning chemistry into an all-out inferno.