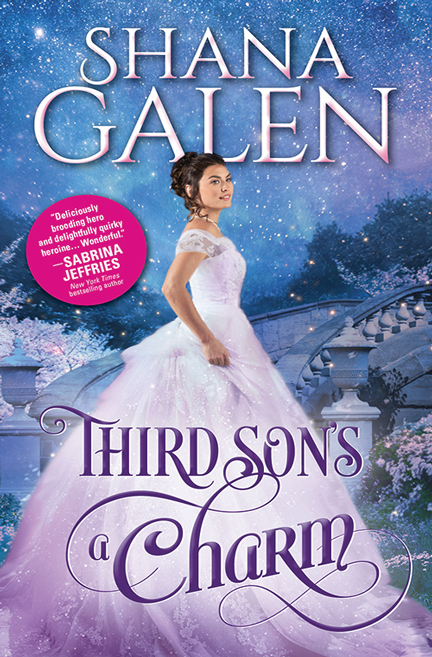 In Shana Galen’s THIRD SON’S A CHARM, Ewan Mostyn thinks a job as a duke’s daughter’s bodyguard will be easy—but Lady Lorraine has a few tricks up her sleeve that spark an undeniable passion

Fiercely loyal to his friends and comrades, Ewan Mostyn is the toughest in a group of younger sons of nobility who met as soldiers and are now trying desperately to settle back into peaceful Society. Ewan trusts his brawn more than his brains, but when he’s offered a job watching the Duke of Ridlington’s stubbornly independent daughter, he finds both are challenged. Fiercely loyal to his friends and comrades, Ewan Mostyn is the toughest in a group of younger sons of nobility who met as soldiers and are now trying desperately to settle back into peaceful Society. Ewan trusts his brawn more than his brains, but when he’s offered a job watching the Duke of Ridlington’s stubbornly independent daughter, he finds both are challenged.

Lady Lorraine wants none of her father’s high-handed ways, and she’ll do everything in her power to avoid her distressingly attractive bodyguard—until she lands herself in real trouble. Lorraine begins to see Ewan’s protectiveness in a new light, and she can only hope that her stoic guardian will do for her what he’s always done—fight for what he loves.

After our hero, Ewan Mostyn, interrupts Lady Lorraine trying to get her would-be-lover Francis to kiss her, she makes her case to Ewan about why she should be allowed to marry Francis.

“I love Francis Mostyn. Is it unnatural for me to want to express my love with a token of affection?”

“Kisses lead to further improprieties,” Ewan said. As soon as the words were out of his mouth, he wanted to turn and see if his father stood behind him and had voiced them. It was exactly the sort of lecture the earl would have given to Ewan’s sister.

“I am prepared for that,” Lady Lorraine argued, turning and pacing the other way. “I want to marry Mr. Mostyn. I will make whatever sacrifice is required.”

“Washing and baking,” he said, recalling her speech earlier.

She stopped pacing and glanced at him. “You heard that then? Yes. As I said, I could earn money by taking in washing or baking pies to sell.”

The woman had no idea what she was talking about. “Have you ever laundered a garment?” Ewan asked.

“I…” She scowled at him. “It cannot be too difficult to learn.”

“It is hard work,” he said. He had never washed any of his own clothing until he’d entered the army, and while the work did not tax him physically, there was an art to it. “The soap roughens your hands and burns your skin, and the fabric grows heavy when wet so that scrubbing it requires some strength. Then it must be rinsed and wrung out and hung to dry.”

She put her hands on her hips. “I understand the process.”

“Have you ever looked at a washer woman?”

Ewan stared at her. He was a nobleman as much as she was a lady by birth. The nobility was not raised to look at the servants but rather to look through them.

“I have looked at them,” she insisted.

Lady Lorraine’s brow creased as though she were deep in thought.

Ewan rarely interrupted, but she looked more chilled by the moment, and he wanted to finish the conversation and bring her inside. “Her arms were large and muscled and probably quite red and chafed. If you lasted in that work for a week, your delicate white arms would be ruined.” He looked at the patch of exposed skin between her gloves and her excuse for a sleeve.

She looked down at it as well. And then she looked back up, her glittering eyes brimming with determination. “Then I will bake pies instead.”

Ewan sighed. “Have you ever baked a pie?”

She looked at him as though she wished lightning might strike him dead. “Listen, Mr. Mostyn, I do not see why my abilities are any of your concern. And don’t think I don’t know why you want to thwart any chance I have of eloping with Francis.”

He’d never supposed she did not know why he wanted to stop her. His father had hired him for that precise purpose. “Your father—”

“No! That’s not why. It’s because you hate your cousin.”

Ewan stared at her. How had she known that?

“You tormented him as a boy, and now you see an opportunity to continue the abuse.”

Ewan was frequently speechless, but he’d never been made so purely by shock. Was that the story Francis had told her? Perhaps that was what his bastard cousin had told everyone. It would have garnered him sympathy, and Francis thrived on sympathy. Ewan could hardly fault her for believing it of him before they had met, but how could she think that of him now?

Ridiculous. Of course she would think such horrors of him. She didn’t know him at all. She didn’t even know the man she claimed to love. Ewan wanted to pity her, but he was far too angry.

“You don’t love him,” Ewan said with more vehemence than he’d intended. That little knot of fury he’d balled up unraveled slightly. She stepped back, clearly surprised as well. “You don’t know the first thing about my cousin or me or, for that matter, love.” He didn’t know why he’d added that last bit. He didn’t know anything about love either.

“And you do?” she challenged, clearly not afraid of him.

“I don’t claim to know about love,” he said honestly, “but I know my cousin, and he is not the innocent you think him to be. He is conning you, my lady—an easy task as you can be taken in for a kiss.”

He advanced on her, but she did not move away. She merely scowled at him.

“You think my cousin loves you? He loves your dowry.”

“And if you were ever kissed by another man or two—kissed soundly and thoroughly—maybe you’d see that Francis Mostyn is not the paragon you seem to think.”

He put his hands on her upper arms, and even through his gloves he could feel the coolness of her skin.

He heard the note of hope in her voice. There was anger as well but he’d heard the hope. She wanted him to kiss her. Well, better him than the next man she encountered, who might be a rake or worse. He would give her what she seemed to want so desperately, and then she would see that there was a world of men beyond Francis Mostyn.