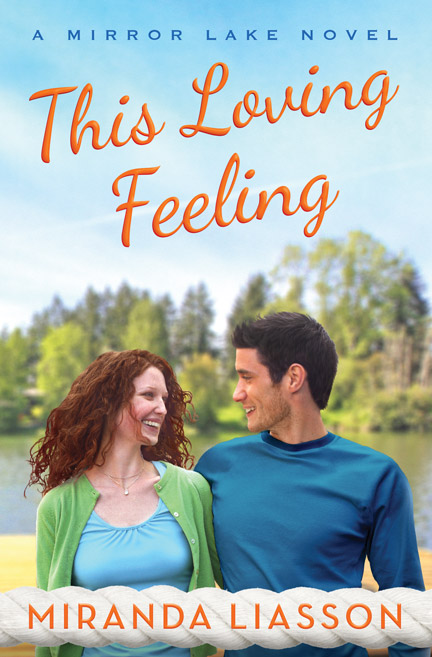 Now, he’s back, much to my heroine Samantha’s chagrin… Lukas Spikonos:  Bad Boy with a Heart of Gold

Hi, I’m Miranda Liasson, and I’d love to tell you about the bad-boy hero of my new release, This Loving Feeling!

Now, he’s back, much to my heroine Samantha’s chagrin…as a world-famous pop star. He’s had a rough-and-tumble past, and parts of his life, like his years bouncing around the foster care system, have been really tough. He’s forced himself to stay away  from Samantha because he sincerely felt he wasn’t good enough for her.

In fact, he left her and Mirror Lake with barely a look back. Except he can’t stop thinking about her. His breakout hit was all about her. And now he needs her help…because he has a kid in tow, his addict-brother’s little five year old, Stavros (Stevie).

Lukas keeps thinking his attraction for Sam would fade if he would just give into it. I love this excerpt, because it not only shows the Heart of Gold under his gorgeous bad-boy exterior, but it also proves he’s in far deeper with Sam than he ever thought…

Sam had already left the room when Stevie’s eyes suddenly flickered open and focused on Lukas. “Are you going to send me away ’cause I caused trouble?” He reached for his blanket, which Sam had wisely tucked next to his pillow.

“Trouble?” Lukas frowned. “You didn’t cause any trouble.”

Lukas knelt down next to Stevie and held his still-chubby little-boy hand. “You didn’t cause any more trouble than any kids cause every day. Everyone gets cranky. I don’t stop loving you just because you’re having a bad day.”

Lukas placed his hand on the little boy’s shoulder. “Stevie, my boy, there’s a saying in Greek.”

“Mi casa es tu casa. Do you know what that means?”

He shook his head.

Lukas did a fist bump with him.

“I love you, Uncle Lukas,” he said, pulling his blanket close and tucking it under his chin.

Those three little words caught Lukas off guard. Something in his chest grew very heavy. His throat became clogged. He was not a crying man, but by God, tears burned in his eyes. He smoothed the hair back from Stevie’s forehead. “You too, buddy. I love you, too.” His voice sounded muted and choked, but Stevie didn’t seem to notice. He just smiled innocently and turned on his side. Lukas kissed him on the cheek and pulled up the covers.

As Lukas turned to leave, he noticed a flash of Sam’s leg turning the corner. When he shut Stevie’s door, Sam was halfway across the main room. Until she stubbed her baby toe on the coffee table and let out a fisherman’s curse.

“Eavesdropping?” he said with a grin.

She took off her flip-flop and rubbed her toe. “You do know the mi casa thing is Spanish, right?”

“Yeah, well, since I only know cuss words in Greek, it’ll have to do.”

His kid had just said I love you, and that meant everything. “Considering I don’t know what the hell I’m doing, thanks. I’ll take that as a compliment.” He moved a step closer. “Want me to look at your toe?”

“No, thanks.” She backed up a step. “You were an excellent clown today, too.”

He edged closer. She backed up another step.

“Look,” she said, “I want you to know that my family is finally getting to know you, and they like you. You charmed the kids, everybody. I just thought you should hear that.”

She couldn’t walk backwards anymore, because she was about to run into the couch. He put an arm on her waist to let her know what was behind her. And because he wanted to.

That one touch was lethal. Her gaze flickered upward and settled on his. He detected worry and conflict, the same emotions coursing through him. Any sensible man would back off now, but when had he ever been sensible? He wanted her too damn badly.

In one smooth move, he pulled her to him and held her, reveling in the feel of her in his arms at last. Her heady scent, the flowery smell of her hair, the softness of her breasts pushing against his chest, he took it all in like a drug. His breath was coming harder now. With one heavy sigh, he heaved all of his inhibitions—and his common sense—away and lowered his lips to hers.

He cupped her cheeks in his hands, tangled his fingers in her hair, and pulled her closer, tighter, and kissed her like this was the last kiss on earth, a one-shot-at-this kiss and he completely went for broke.

It started with purposeful, subtle pressure, but once he tasted her soft lips, he lost all control. When she parted them on a sigh he devoured her, their tongues meeting and searching, soft and urgent, and their bodies pressing against one another like there was no tomorrow. Because maybe for them, there wasn’t.

Lukas had kissed many women, but none of them had made him breathless and dizzy. He pulled away briefly, disoriented. That gave her enough time to think, and in one swift move, she pushed off and stepped away, wiping the last traces of him off her mouth.

He followed her across the room. “Sam, wait,” he called, but it was too late. She’d grabbed her purse off the little eating table and headed to the sliding doors.

“Please don’t follow me,” she said, then left out the door.

That had been some kiss. Funny, but kissing her hadn’t had the effect he’d intended. Instead of getting her out of his system, she appeared to be working her way in. The more he got to know her again, the more he found that the reality didn’t match the fantasy. It was better.

Miranda Liasson loves to write stories about courageous but flawed characters who find love despite themselves, because there’s nothing like a great love story. And if there are a few laughs along the way, even better! She’s a former Golden Heart winner who writes lighthearted contemporary romance for Montlake Publishing and series romance for Entangled Publishing. She lives in the Midwest with her husband, three kids, and Posey, a rescue cat with attitude.

GIVEAWAY: 5 e-copies (U.S. only) of This Loving Feeling

9 Responses to This Loving Feeling by Miranda Liasson Spotlight & Giveaway