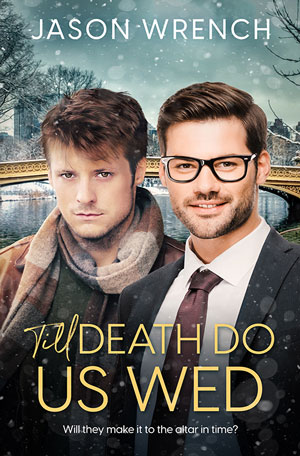 Planning a wedding is hard enough without international politics, an assassin, your fiancé’s ex-boyfriend and your mother to deal with.

NYPD Detective Frank Schultt and his fiancé, FBI Agent Aaron Massey, have bought a new condo, adopted a dog and are planning their wedding. But when an international assassin starts killing people on the streets of New York City, Aaron and Frank must work together to find the killer before she strikes again.

Till Death Do Us Wed By Jason Wrench 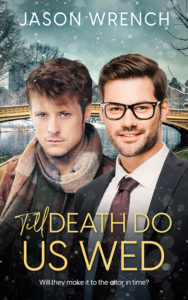 Planning a wedding is hard enough without international politics, an assassin, your fiancé’s ex-boyfriend and your mother to deal with.

NYPD Detective Frank Schultt and his fiancé, FBI Agent Aaron Massey, have bought a new condo, adopted a dog and are planning their wedding. But when an international assassin starts killing people on the streets of New York City, Aaron and Frank must work together to find the killer before she strikes again.

Combine the assassin with the pressure of Frank’s jealousy when Aaron’s ex-boyfriend comes back to town, and can their relationship withstand the pressure? Will Aaron and Frank make it to the altar on time, or will the assassin and Frank’s destructive behavior stop their wedding before it ever heads down the aisle?

Publisher’s Note: This book is best read as the sequel to Twelve Days of Murder.

Frank stared around the pink office, wondering if a bottle of Pepto Bismol had accidentally spilled. He watched the perky blonde woman sitting in front of him, doing his best to pay attention. It wasn’t exactly how Frank liked to spend his Saturday mornings. But it was Aaron’s big day, so he’d promised to grin and bear it.

“With Central Park wedding locations, we are definitely somewhat limited. For example, the Bow Bridge only allows for ten guests and the Belvedere Castle Terrace only allows thirty. The North Garden, Southern Garden, Wisteria Pergola and Cherry Hill each allow for up to one hundred. What size are you two thinking?”

“I’m joking,” Frank reassured, patting Aaron’s leg and giving it a squeeze before turning to the woman. “Whatever Aaron wants, I want him to have.”

NYPD Detective Frank Schultt and FBI Special Agent Aaron Massey had met the previous year during a serial murder spree. The Twelve-Day Killer, as dubbed by the media, had terrorized NYC over the holidays. Aaron and Frank had put their lives and careers on the line hunting the bastard down. In the process, they had found each other.

Frank glanced over at the man he loved. God, where would I be without him? He reached up and rubbed the back of Aaron’s neck gently. From the top of Aaron’s head with his dark brown quaff haircut and his Caribbean ocean-blue eyes, to his lithe but fit body, Frank took in this man sitting beside him who was going to be his husband. Frank was still stunned at his good fortune in landing the affection of such an amazingly intelligent and gorgeous man.

Realizing his thoughts had drifted, Frank brought his attention back to the woman sitting in front of him, who was rattling on about Central Park weddings. He glanced down at her nameplate, ‘Amber Wethersfield’. The woman was in her late twenties. And judging by the giant diamond on her wedding ring, her husband was definitely wealthy. Frank glanced across the pink office looking for personal items and was surprised by the lack of photos. For a woman who sells marriage, where are the pictures of her happy day?

“So, do you have an officiant for your wedding lined up? If not, I have a list of great people who work with LGBTQIA+ people.”

“Huh?” Frank blurted before he could catch himself.

“Officiant…the person who will oversee the ceremony and the exchange of your vows,” Amber offered.

“No, you listed off a bunch of letters,” Frank said.

Dear God, that sounds like a gay BLT. Frank was about to make the snide comment, but a quick glance from Aaron told him that he’d better hold his tongue. Instead, Frank just nodded his head and gave a thin-lipped smile.

“Actually, we have a few people in mind,” Aaron noted. “Frank knows a judge who volunteered her services, and we have a couple of other names in the hopper as well.”

“Oh, good,” Amber said. “You’d be amazed at how many people totally forget the officiant until the last minute. I even have a license I got from an online church because I’ve had to step in at the eleventh hour when something went horribly wrong. I just don’t enjoy being in the wedding party, because it makes it harder for me to run things behind the scenes.”

Frank leaned back in the chair and watched as Aaron and Amber discussed the wedding. This wasn’t Frank’s first. He’d been married, but his husband had been murdered in a liquor store robbery on Christmas Eve over six years ago. As much as Frank loved Aaron, there was still a vast hole in his heart that had been left by Adam’s death. But Frank loved Aaron and was going to make sure their wedding day was every bit of glitz and glamour that Aaron desired.

“Well, if you have questions,” Amber said, bringing Frank’s attention back once again, “just let me know. You have my email, cell phone, home phone and office phone numbers, so never hesitate to reach out. I look forward to working with both of you on your big day.”

Amber stood up from her desk to usher the couple out of her office. She pushed herself up, exposing her pregnant belly.

“When’s the due date?” Aaron asked.

“Mid-March. But I swear she’s ready to come out any day.”

Frank stared at her belly and just thought, Are you sure there’s only one in there? But once again, he held his tongue.

“Don’t worry. I won’t miss your big day. When I’m out on maternity leave, my assistant will take over the day-to-day preparations, and he’ll be in constant contact with me. When I had my first baby, we were texting right up until they told me to push.”

“Well, it was really was nice meeting you,” Frank said.

“Likewise. And I just have to say, you two make such a cute couple.”

“Thank you,” Aaron said. “I think he’s a keeper.” Aaron gave Amber a little wink before turning to leave.

As Frank followed suit, Aaron’s hand rested in the small of Frank’s back. Frank leaned into Aaron in response.

“Earth to Frank!” Aaron said as they exited onto the sidewalk. The February chill immediately caught Aaron off guard, and he lifted the collar on the trench coat to protect his neck.

“I said, “Earth to Frank.” What’s going on inside that head of yours?”

“The whole wedding planning is just bringing up some memories.”

Aaron squeezed Frank. “I hadn’t thought about that. I forget that you’ve done this before.”

“Yeah,” Frank said, scrunching his forehead. “It’s surreal. Don’t get me wrong, I’m excited to be marrying you. I hope you know that. It’s just that it brings up memories of Adam.”

“I get it,” Aaron said. “I would be surprised if it didn’t, to be honest.” Aaron hesitated for a second before adding, “Just know…I will never try to replace Adam. I know what you two had was special—”

“What we have is special too.”

“I know,” Aaron acknowledged. “I just want you to know that I love you and would never try to change you…warts and all.”

“We all have warts. Some have them physically and others have them metaphorically.”

After dealing with the Twelve-Day Killer, Aaron had taken a teaching position part-time with the John Jay School of Criminal Justice. He was technically still on the FBI’s payroll, but his utility as an undercover agent had taken a hit after the amount of press the Twelve-Day Killer had received. And with the forthcoming publication of his new book about the case, Aaron and Frank both knew a fresh round of press attention was right around the corner.

“So, we didn’t have breakfast after the gym this morning,” Aaron said. “Shall we have a quick brunch before heading back to the apartment to get ready?”

“Do we have time?” Frank asked, glancing down at his watch. “It’s already ten a.m. What time is the car picking us up for the reading?”

“The reading’s at two o’clock, so the car is scheduled to pick us up about one-fifteen.”

“I guess we have plenty of time. Any suggestions on where we should eat?”

“How about 9Ten?” Aaron asked, referring to one of their favorite diners. 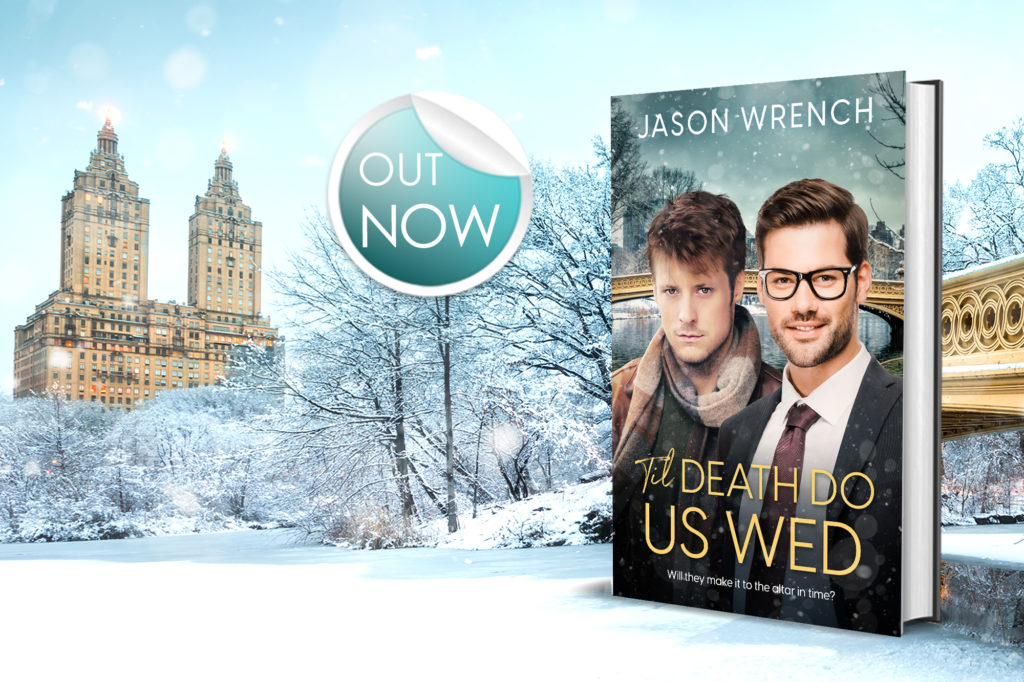 Jason Wrench is a professor in the Department of Communication at SUNY New Paltz and has authored/edited 15+ books and over 35 academic research articles. He is also an avid reader and regularly reviews books for publishers in a wide number of genres. This book marks his first full-length work of fiction.