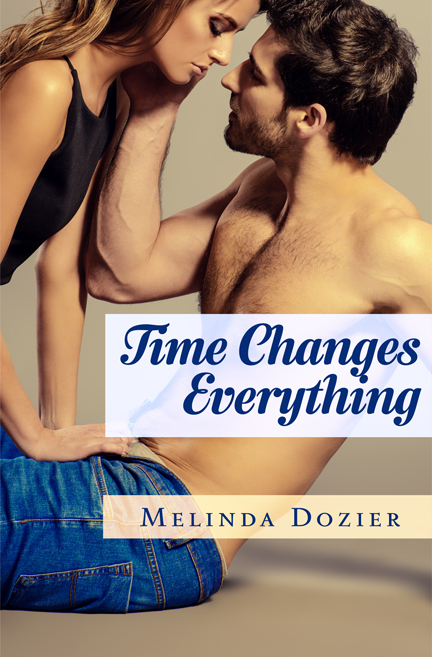 TIME CHANGES EVERYTHING by Melinda Dozier

Amanda Larson is dedicated to her job and doesn’t want to make time for anything else. Until she runs into Jake Edwards. He used to be the cute boy next door; now he’s a sexy, big shot lawyer.

Jake Edwards isn’t interested in commitment. He’s successful, sexy, and single–and that’s how he likes it. When he reconnects with Amanda, Jake realizes he might have to rethink his philosophy on the carefree, bachelor lifestyle.

Amanda Larson is dedicated to her job and doesn’t want to make time for anything else. Until she runs into Jake Edwards. He used to be the cute boy next door; now he’s a sexy, big shot lawyer.

Jake Edwards isn’t interested in commitment. He’s successful, sexy, and single–and that’s how he likes it. When he reconnects with Amanda, Jake realizes he might have to rethink his philosophy on the carefree, bachelor lifestyle.

But, is it too late for them? Or can he convince her that he’s ready to give her his heart?

He turned her hand in his and rubbed her palm. “I thought we had something good going on back there.”

“Me too, but I changed my mind.” Amanda pulled her hand from his and stared out the window. She’d been having a good time – maybe too good – but that was before Jessica Rabbit and Bimbo Number Two appeared on the scene.

Jake sighed. “I’ll get your door.” He got out and ran to her side of the car. As he opened the door for her, he held out his hand.

Amanda ignored him as she got out. I can’t look at him. If I look at him, I’ll melt into his stare. Get out, say goodnight and go home. As the car door closed, she turned and he leaned against the shiny, black fender with his hands in his pockets.

Jake lowered his gaze in confusion. “I hope you had a good time tonight, even though you’re acting like you didn’t.”

Amanda crossed her arms in front of her chest and sighed.

He took a step closer and shook his head, looking hotter than she’d ever seen him. His hands still rested in his pockets and his serious deep-blue eyes stared at her. “You don’t have to be scared of me.”

“I actually don’t trust myself, Jake.” She switched her weight to her other leg and rolled her eyes.

“Why? You think you’re going to jump me?” He chuckled as he took his last step to her. “I wouldn’t mind.” His gaze traveled over her face, as if he were memorizing every freckle.

He wanted more. Hell, she did too. But then what?

“So, you think that after I jump you, all this will go away?” She pointed back and forth. “That this attraction will be out of our system and we can continue to be friends? Is that how it works for you?”

He clasped her body tightly to his, his hands wrapped around the sides of her waist, his breath on her face. “What I know is we’ve passed the line of friendship already, so we should just stop holding back.”

Then he kissed her. Completely. Thoroughly. Long and slow and deep. His lips were perfect and she found herself moving to get a closer touch – if that was possible. His hands roamed her back and warmth shot up her neck and back down to her toes. The man knew what he was doing. Either he was a pure player or his desire ranked up there with her own.

Since her knees wobbled, she balanced her hands on his chest, and before she was ready for it to end, he stepped back and smiled, “See what I mean?”

Her world swam around her. She tried to speak, but found herself breathing like a lunatic instead. What did he do to her? He was toxic.

Her head dropped and she stared at her feet. Taking a few deep breaths to get her demeanor together, she finally looked at him and what she saw scared her even more. The same look from the last time they sat on her front porch stared back at her. Half-promises and empty words. “I can’t do this. Goodnight, Jake.” She left him, his mouth wide open, allowing her doorman to direct her to her apartment, because she couldn’t think.

Once inside, she dropped her forehead on the door. Damn him. Looking so sexy.

She slipped off her heels and groaned in frustration. Despite her head knowing she shouldn’t do anything with Jake, she replayed their last kiss over and over. Being with Jake would have been so nice. If the man could kiss like that, imagine what else he could do.

How did Jake see her? He didn’t look at her as a little Squirt anymore, that was for sure, but what did he want? A one-night fling? To add her to the long list of Barbie dolls? Or was he ready to move past that to something more?

Banging at the door startled her and she jerked back a beat. It couldn’t be. Her heart drummed in her chest and she pulled a strand of loose hair behind her ear. Who else would it be?

After she took a few deep breaths, she opened the door. Jake stood on the other side, his hands clenched by his side and his Adams apple bobbing up and down as he swallowed. Pools of sea blue stared down at her and his finger reached up and glided down her cheek. A pang soared through her heart.

He shook his head, as if in disbelief, and blinked his eyes. “I can’t stop thinking about you.”

Other books by Melinda Dozier: Reading romance has always been at the top of Melinda’s favorite past times. You can always find a book in her hands no matter where she is.

Melinda is Louisiana born, New Mexico raised, Guatemala adopted, and recently a newcomer to Houston, Texas. So, it’s only natural that her stories take place all across the world.

Find Melinda on social media at:

One Response to Time Changes Everything by Melinda Dozier