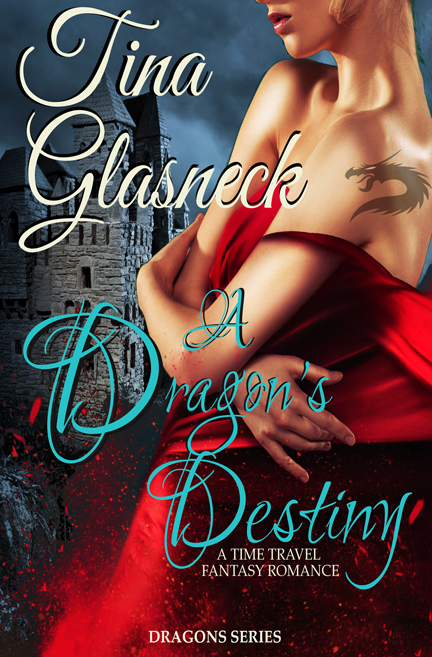 A Dragon’s Destiny by Tina Glasneck ♥

Curses are destined to be broken…

In this the first of the Dragons series, time travel and fantasy are weaved together in a fast-paced, funny yet emotional romance.

Jaz, a fish out of water in the real world, discovers that she is actually a dragon. She must seek her true destiny in another, parallel place… Writing requires conflict – internal and external. When it comes to time travel romance, there is nothing as interesting as putting the characters in a foreign time and see how they conform, change, and maybe find love. Internal conflict is the emotional baggage that can keep a couple apart  (it’s the feelings and inner turmoil), and external conflict is on the outside (think war, being chased by bad people, something outside of an individual’s body) and it is often the catalyst of what  can bring a couple together.

For A Dragon’s Destiny, I wanted a setting that could bring that conflict, and nothing does it like the Protestant Reformation. For me, this meant diving in to Church history, since I was placing my characters in a European, Medieval society in the year of 1520. Although I am a theologian by training, I audited a history class at the University of Barcelona called Magic in the Middle Ages. This course was fascinating, and, today, I want to share one thing that a modern day individual thrown back in time might have to deal with: the Catholic Church’s power.

In our society today, we have freedom of religion, and a gender equality that allows men and women to theoretically be treated equally. However, in 1520, that was not so.

The 1500s was a topsy-turvy world, whereby the religion of centuries (Catholicism), was being questioned and splintered. The religious reformation was a huge shakeup. Catholicism was in every part of society, and in 1517, Martin Luther nailed his 95 Theses on the Wittenberg Castle Church door. This was badass, for lack of a better term. He basically said, “Hey, I’m taking issue with the establishment and going to do something about it.”

In this world, the people had been taught that they could only get to the afterlife, to heaven, by way of the church.  It was an indoctrination that works got one to heaven and not faith. This was one of the main points Martin Luther argued against.

As a monk, Martin Luther had the training to counter the Catholic Church’s teachings, and that of the selling of indulgences, or godly favor. At that time, the Catholic Church was very powerful- it had a fist around every aspect of life, a finger in every kingdom, and there was no way to change it. But this one man, after his studying and questioning, decided to rebuff the organized establishment. This sent waves throughout Europe, resulting in Henry VIII separating from the Catholic Church some twenty years later. The first questing of papal authority began the unraveling.

So, if kings and their country men were all under the control of the Church, the belief system of the church was therefore also that which was used to create political intrigue, and, a means to inflict torture and be rid of enemies, all with the accusation that one was no longer following the edicts or rulings of the Catholic Church or believed in the faith.

Faith was not personal. Kingdoms were a mixture of monarchial rule combined with that of a theocracy, for the papal authority did not have borders. Being all powerful, the Church ruled harshly, punishing those who refused to abide by its rulings by calling them heretics, and ultimately burning them at the stake.

In this time, one risked hide and hair, and it is the perfect backdrop for my romance, A Dragon’s Destiny. In the first of my  Dragons series, time travel and fantasy are weaved together in a fast-paced, funny yet emotional romance, which begins in 2012, and the main character, Jaz, travels to 1520.  She faces more than just a scenario of being stuck in another time, but also has to figure out how to maneuver through it all, successfully, or face the ultimate punishment: death. Curses are destined to be broken…

In this the first of the Dragons series, time travel and fantasy are weaved together in a fast-paced, funny yet emotional romance.

Jaz, a fish out of water in the real world, discovers that she is actually a dragon. She must seek her true destiny in another, parallel place.

There she discovers that Erich, the man she secretly lusts after in real time, is the Dark Knight. He’s ruthlessly extinguishing the ancient Norse religion in an emerging Christian world.

Is he the beloved Jaz is tasked to find in order to release her dragon heart?

“Do you always sneak up on women?” I asked, still not turning my head, though I perceived it was him. Just like I was aware that he preferred sparkling water to tap water, and he’d be wearing that devilish smile on his above-average attractive face.

To catch a glimpse of him in person, beat the dream I had of him every night where he wielded a jewel- encrusted sword. Nightly he appeared as a Viking, but today I had the pleasure of seeing him as he really was—an attractive man holding flowers.

“Only those that wish me to. Another late night?”

Concern peppered his voice. Erich never asked a question just to hear his own voice, no matter how appealing that might be.

I sniffed the air and smelled a combination of Old Spice mixed with fresh geraniums. “Flower delivery for your dear sister?”

I turned to face him.

He stood there, a neatly trimmed beard resting on his chiseled jaw. Kissable lips smiled. His six foot four inch stature towered over me. His silver eyes practically sparkled.

“Well, I’d bring them to you, too, except only the rarest flower will do for you, and my order hasn’t come in yet.”

“I think that’s just another of the excuses I’ve been hearing for months — our morning accidental meetings, with you wearing a tight T-shirt stretched across your broad shoulders. Next thing you know, you’ll beat me senseless with a bat over the head and drag me away to do naughty things.”

“I don’t know what I should be most offended about, that you laugh at imagining me being naughty or wielding a bat.” He came closer and leaned in. “I’ve been known to wield much more enjoyable things than a blasted bat.”

TINA GLASNECK can’t imagine a world without books. Her works have been classified in several genres, including mystery, suspense, fantasy and paranormal romance, and new adult. Yet for Tina, it is all about the characters and their journeys.

An avid reader with a love of traveling, meeting new people and exploring her world, her interest in law, religion, history, fantasy, and dragons, made writing about it an “easy” choice. Give her a castle to enchant her, and tell her a funny story to make her snort with laughter, but please don’t serve her cake with red icing.

Tina takes joy in beautiful architecture, lively cities and world travel. She enjoys creating make-believe worlds where she sometimes resides, and is often thinking about and tinkering on her next story. Sometimes she feels like a real life Cinderella, without the ashes or the fairy godmother; and, at other times, she is just a girl, looking for a chance to tell that next great story. www.TinaGlasneck.com.