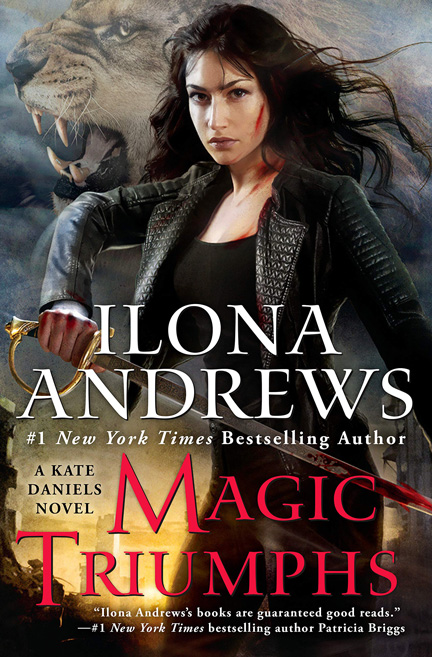 MAGIC TRIUMPHS by Ilona Andrews is the tenth and final book in the bestselling Urban Fantasy series, Kate Daniels. It was my privilege to read and review this book, and I nearly cried when it ended because I didn’t want to say goodbye to this stellar series and wonderful characters.

This series is best read in order, starting with MAGIC BITES. I highly recommend it to anyone who loves paranormal romance, paranormal fiction, and urban fantasy. It doesn’t get better than Kate Daniels and Ilona Andrews. Until, of course, a new villain emerges, one even scarier than Roland—Kate’s father. The mystery of who these murderous creatures are and why they’ve come to Atlanta unfolds as the multifaceted world of Kate Daniels takes place. Familiar characters we’ve come to know and love throughout the series all play their parts. Julie, Derek, Barabas, Andrea, Roman, Saiman, Luther, Erra, even Nick and Hugh—HUGH—what a terrific part for him to play! And the family scenes, especially with Conlan, the baby, had me laughing out loud. Both heartwarming and funny, Kate’s family and friends are the cornerstone of this series.

This is my top book of the year, and I’m only sorry to see beloved characters go. But there are still two more Hugh stories for Andrews to write, as well as a teaser that perhaps some characters from the Kate Daniels’ world will continue in a spin-off series. Here’s hoping!