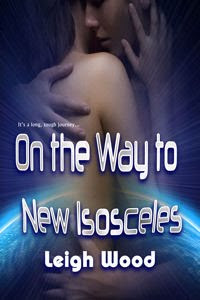 JJ was as hard nosed as they come-and them some. But, hey, the destruction of earth did that to everyone. Humanity fractioned into three groups. Affectionately known as ‘the Shitters’, the Shipper Brigade manufactures the best space faring vehicles for themselves. Skilled fighters and martial artists Combatants like JJ fight the Shippers for what they can-even though Combatant numbers were severely depleted by the third faction. The Nukes rescued chemical, biological, and nuclear weapons from earth’s doom and aren’t afraid to use them.

You can imagine JJ’s surprise when she meets the Nuke Lieutenant Rub. Their initial meeting didn’t rub either the right way. Despite her Nuke anxiety-JJ has to put it all aside. Her Captain and the Nuke Colonel have struck a deal to defeat the Shippers once and for all. The Nukes leave their tiny outpost on a far flung, degrading planet and join the Combatants in taking the lush planet protected by the Shippers.

It’s a long, tough journey on the way to New Isosceles, and the animosity between Rub and JJ gets hotter by the day…….

Rub waited with Captain Westmayer and Colonel Gauthier by the Nuke’s small but streamlined transport in the Mother Ship’s Lift-Off Zone. Once Rub had met the very hot and charming Kimmie Dejonaire, Miguel warmed to him as well. Most of the Combatants had relaxed on their flight to Isosceles – except for one. Well,two, but he suspected Private Wu never thawed. The zone’s doors parted as Kimmie and Ina strutted toward him in their sexiest get ups; satin and tiny, hair vamoosed – Rub noticed these things. Friendly or iced, it was still hawt.

Miguel hurried behind them, equally dressed for a night on the town. His style was a little flashy for Rub’s tastes. He didn’t have to show his dick size on the outside. It showed in his smile and charm.

“How do I look?” Kimmie asked her friends.
“Not as good as me,” Ina chuckled. She did look phenomenal out of uniform, if a bit scary. She was taller than Miguel and probably always intimidated him. Ha!
“Where’s JJ?” Miguel asked.

Yes, where was the anti-Nuke who spent all her time avoiding Rub? A little socializing would do her good; all the other Combatants were dressed to the hilt and ready to part-ee! He wanted an opportunity to piss off JJ, but he didn’t really expect her to join them. His duty to pilot the transport almost assured it.
“She’s pouting, of course,” Kimmie puckered her lips in mock imitation. She stopped beside Captain Westmayer and Colonel Gauthier. Her breasts had entered the Lift-Off Zone before she did, and Rub was amazed by her ability to not give everything away when she hiked into the Nuke shuttle before the men. Did all the Combatant women have such long legs?

Where to Find Us

On the Way to New Isosceles is currently available in ebook from our publisher’s website.  Look for our storefront explosion at Fictionwise, Barnes and Noble, eReader, and All Romance ebooks to follow in the coming weeks.  Our paperback edition will also be available on Amazon later this month. You can read all the details at our EP Ordering Page:

Science Fiction and sex, oh my! You can also read the first TWO Chapters FREE at my blog and collaborative livejournal with fellow EP author Kristin Battestella:

If you’re a fellow author or reader and want to connect on Facebook, do come and find me! You can also do the RSS subcribe and follow magics at my blog, co op livejournal, or join the Kristin Battestella Yahoo Group where I’m known to be a pain in the ass!  I’ll be making my presence known there again for a Guest Day Tuesday November 17. Look to the calendar there for more upcoming chats, appearances, and events as well!

Lastly, here’s a touch about me, just in case you’re wondering who this zany red head is!

Newly married and living the high-rise condo life, Leigh Wood is not tech savvy and fights with writing on her laptop between baking and sewing projects. She prefers handwriting with weird pens and odd paper and collects animal prints and records via rummage sales. Leigh loves naughty fantasy and science fiction, but sharpens her skills with nonfiction essays and reviews. Her articles can befound at I Think, Therefore I Review (http://ithinkthereforeireview.blogspot.com) or her own blog (http://leighwood.blogspot.com).

There’s similar bits at my EP Author Page, too,  I’m currently last in the author’s tab!

On the Way to New Isosceles

2 Responses to Travel with Us 'On the Way to New Isosceles'!