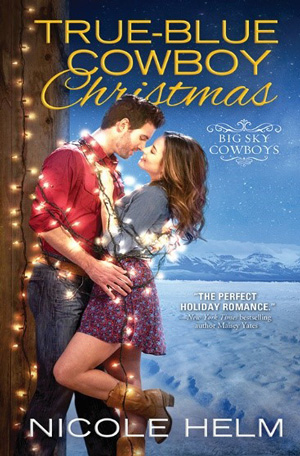 TRUE-BLUE COWBOY CHRISTMAS by Nicole Helm.  Thack Lane has his hands full. For the past seven years, he’s been struggling to move on from his wife’s tragic death and raise a daughter all by his lonesome. He doesn’t have time for himself, much less a cheerful new neighbor with a smile that can light up the ranch. I admit it, I’m a Christmas junkie. I used to take boxes of Christmas decorations to my college dorm/apartment every year. I have three trees in my basement and a plethora of tubs of ornaments, books, sparkly things, decorative plates and the like. December is all Christmas music all the time. I love Christmas.

Which was why it was fun to mix the magic of Christmas and the magic of romance in True-Blue Cowboy Christmas. My favorite part of Christmas is family, which is why I brought the whole crazy Shaw clan together for this final book in my Big Sky Cowboys series.

To me, the holidays are all about love, so my favorite holiday traditions are either done with family or because they remind me of family.

Go to Iowa. This probably isn’t on everyone’s favorite traditions list (but if it is, Iowa fist bump), but my extended family is mostly in Iowa, which means every year since my family moved away we make the trek up the Avenue of Saints to see my grandparents, aunts, uncles, cousins. This was always my favorite part of Christmas as a kid, and now as an adult I love sending my kids down to the basement with my cousins’ kids to play, because that’s what my cousins and sisters and I all did as kids. Eating cookies my grandma gets from her church cookie swap, or letting them run out into the yard to play in the snow with my grandpa’s dogs—just like I did as a kid.

There are a million other things I love to do around Christmas time as well, but I’ll spare you my never-ending list. True-Blue Cowboy Christmas features a few (Rudolph, tree trimming, etc), and if you’re looking for a heart-warming Christmas read, I hope you’ll check it out. Thack Lane has his hands full. For the past seven years, he’s been struggling to move on from his wife’s tragic death and raise a daughter all by his lonesome. He doesn’t have time for himself, much less a cheerful new neighbor with a smile that can light up the ranch.

With Christmas right around the corner, Summer Shaw is searching for somewhere to belong. When her neighbor’s young daughter takes a shine to her, she is thrilled. But Thack is something else altogether. He’s got walls around his heart that no amount of holiday wishes can scale. Yet as joy comes creeping back to the lonely homestead, Summer and Thack may just find their happily ever after before the last of the Christmas miracles are through…

Summer started walking, but Thack took the guitar case from her. “Here, let me help.”

It wasn’t necessary, but it was awfully nice. Especially when his free hand took hers, their fingers intertwining. It was like the culmination of so much desperate belief—that not all men were like the men Summer had met through her mother. That something sweet and easy and normal could exist, and that it could be something she might earn. She swallowed at the lump in her throat. How silly she was to be emotional over something so…little.

The frigid, dark air helped her get her bearings. She led him to where her car was parked, and he helped her load the guitar in the back. When she shut the door, she turned to look at him and managed her best flirtatious-if-nervous smile. “So. Walk?” Though she didn’t know how long they’d last in the freezing temperatures, she thought she might tempt frostbite if it meant spending time with him.

Before she could even ask what, his mouth was on hers and she sighed into the kiss, leaning into him. She loved the way his hands tangled in her hair, that even though they weren’t exactly at ease around each other one hundred percent of the time, this was easy.

No, easy wasn’t the right word. It just worked. Their bodies fit and somehow his mouth always knew exactly how to move against hers, like they had been built to match in all of the right places—two puzzle pieces that on the surface hadn’t looked like they would fit together.

But the surface was never the whole story, and while for the past two years she’d desperately tried to make the layers fit, she couldn’t erase those first twenty years of her life.

Somehow, kissing Thack in the middle of a dark Montana town, she found she no longer wanted to erase the experience of those years. It was a part of her, a part of how she’d gotten here, to this place where his kiss, his hands, he felt like magic.

She wanted more. He wanted more. They wanted each other. She didn’t want to freeze her butt off on a walk down Main Street. Not when, for the first time, their time together was truly just the two of them. No matter where this took them, that was something to grab with both hands and not waste.

“We could skip the walk,” she said, holding on to his coat, ignoring the press of the car door handle in her back.

“You could take me home.” She sounded breathless and probably ridiculous, but she didn’t care. This was something she’d dreamed about. Over the years, she had put a great deal of thought into the details—when and how, and what type of person would be the one she would want to give those last pieces of herself to.

Thack wasn’t exactly what she’d pictured, but at the same time, he was more. Strong, steady, dedicated. Everything about him awed her. He had her pressed against a car door, and she was deliriously excited with it. How could she not want to jump in feet first?

“But we have two cars and… I’m taking this too literally, aren’t I?”

She couldn’t stifle the laugh, both happy and nervous. “You are. I mean, if you have to get back to Kate, I understand. But you could escort me home. If you have the time. If you want.”

“Dad said he’d call if he and Mrs. Bart needed me, so I could take you home. You know, I…I’m kind of curious about what the inside of that thing you live in looks like.”

“Thank you for being ten times better at this whole flirting thing than I am.” He brushed a kiss against her mouth.

She smiled up at him. “Luckily, you make up for the bad flirting in the kissing department.”

He gave a short laugh. “Not a bad trade.”

She took a deep breath and mustered all of her courage and all of her determination. She set goals, and she reached them. Thack didn’t have to be any different. “So, follow me home?”

He gave a short nod and held the driver’s side door open for her as she slid in. She started the old clunker, only partially sad when it actually started. It would have been kind of nice if he’d been able to drive her home.

He hesitated again, then smiled. “I’ll see you soon.” Carefully, he closed her door. In the rearview mirror, she watched him walk away, her heart pounding wildly. She’d invited him to her place. She’d offered a tour, which she hoped was obviously more euphemism than reality.

Well, it didn’t matter. Because tonight…tonight she was going to go after exactly what she wanted.

NICOLE HELM writes down-to-earth contemporary romance specializing in neighbors who don’t live close enough to be a problem. When she’s not writing, she spends her time day dreaming about someday owning a barn. She lives with her husband and two young sons in O’Fallon, Missouri.