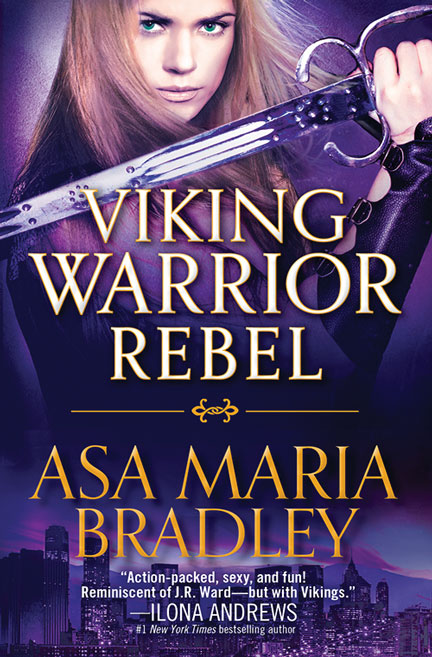 I am delighted to join you today to chat about one of my favorite things: Vikings! Being born and raised in Sweden, I was introduced to Norse mythology through childhood picture books. I loved the stories of Odin and Freya and the other gods who lived in Asgard. And later on, my seventh grade history teacher noticed my interest and shared his favorite books with me. I am delighted to join you today to chat about one of my favorite things: Vikings! Being born and raised in Sweden, I was introduced to Norse mythology through childhood picture books. I loved the stories of Odin and Freya and the other gods who lived in Asgard. And later on, my seventh grade history teacher noticed my interest and shared his favorite books with me. In my Viking Warriors series, I combine my love of Norse mythology with my love of paranormal romance to write about brave immortal warriors who have been sent back to Midgard—where mortal humans live—to protect contemporary humanity from Loki and his evil minions. And they of course happen to fall in love in the process.

Vikings and Valkyries have inspired a slew of story tellers, from Tolkien’s The Lord of the Ring trilogy to the History Channel’s TV show Vikings, Norse mythology and history is showing up in a lot of our pop culture. So why don’t we dish about our favorites?

I have to include Red Serpent in my list because he’s the main character in the book that my amazing seventh grade teacher first steered me toward when he noticed my interest in all things Vikings. (The original Swedish title is Röde Orm, which means Red Serpent.) I devoured the adventures of the Viking nicknamed Red because of the color of his hair and his hot temper. The book also has some very strong female characters, especially Red Serpent’s mother who shares my first name. This may be another reason for why I connected so strongly with the book. J

If you are a fan of Viking stories, I hope you check out my Viking Warriors series and also Tales of the Valkyries, an anthology of Viking short stories I collaborated on with Gina Conkle, Harper St. George, Anna Marklund, Emma Prince, and Lisa Hendrix. The anthology is free right now across all ebook retailers. She can’t let him discover…

Immortal Vikings are among us

Astrid Irisdotter is a Valkyrie—a fierce warrior fighting to protect humanity from the evil god Loki and his brutal minions. She’s on an urgent mission for her queen when everything goes hideously sideways. Undercover agent Luke Holden arrives on the scene just in time to save her life—and put his own on the line.

Luke may have saved her, but that doesn’t mean Astrid can trust him. Tempers flare as they hide secret upon secret from each other, but Astrid’s inner warrior knows what it wants…and it will not take “no” for an answer.

2016 double RITA finalist Asa Maria Bradley grew up in Sweden surrounded by archaeology and history steeped in Norse mythology, which inspired the immortal Vikings and Valkyries in her paranormal romances. She arrived in the U.S. as a high school exchange student and quickly became addicted to ranch dressing and cop shows. Asa currently resides on a lake deep in the pine forests of the Pacific Northwest with a British husband and a rescue dog of indeterminate breed. She graduated from the Inland Northwest Center for Writers program at Eastern Washington University with an MFA in creative writing and also holds an MS in Medical Physics from University of Colorado. Visit her at www.AsaMariaBradley.com, or follow her on Twitter @AsaMariaBradley.