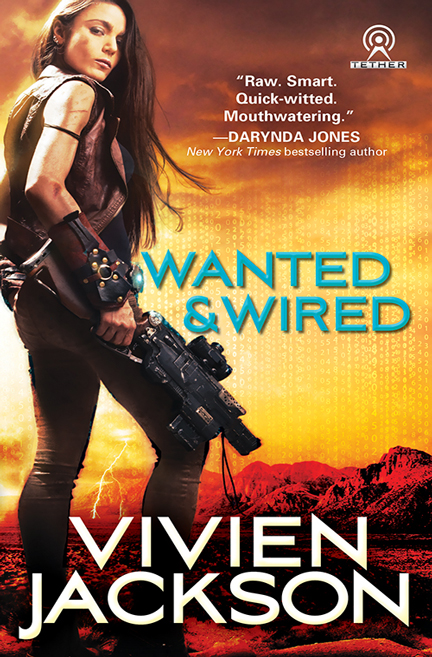 WANTED AND WIRED by Vivien Jackson.

A rip-roarin’ new snarky, sexy sci-fi paranormal romance series with the perfect balance of humor, heat, and heart. Now that Texas has seceded and the world is spiraling into chaos, good guys come in unlikely packages and love ignites in the most inconvenient places… A rip-roarin’ new snarky, sexy sci-fi paranormal romance series with the perfect balance of humor, heat, and heart. Now that Texas has seceded and the world is spiraling into chaos, good guys come in unlikely packages and love ignites in the most inconvenient places…

Heron Farad should be dead. But technology has made him the man he is today. Now he heads a crew of uniquely skilled outsiders who fight to salvage what’s left of humanity: art, artifacts, books, ideas—sometimes even people. People like Mari Vallejo.

Mari has been lusting after her mysterious handler for months. But when a by-the-book hit goes horribly sideways, she and Heron land on the universal most wanted list. Someone set them up. Desperate and on the run, they must trust each other to survive, while hiding devastating secrets. As their explosive chemistry heats up, it’s the perfect storm…

She popped her bubble gum and leaned against a Plexiglas route map. Cool as a daiquiri was Mari.

He waited for the bus to pull away from the stop and then rolled his car to the curb, about a meter from her mud-caked wellies. Green ones, with tiny sunflowers on the pull loops. He moved one hand off the steering wheel, signed a command, and her door shished open.

She leaned in, twirling the parasol, flinging errant raindrops all over his contrast-piped leather interior. Cool sprinkles, like cupcake dusting. A dimple tucked itself next to her flirty smile. “Hey, stranger. Goin’ my way?”

Heron pressed his lips into a line. “No funning, please. Get in. Quickly.”

“No kiddin’ no fun,” she muttered under her breath, probably forgetting that her com was subvocal. Although she was sharp as a shiv when her hands were on a gun, she could forget crucial things on planning and extraction. Or she deliberately relied on him to keep all that sorted.

Either way, Heron didn’t mind. He reached through the wireless and shut down her com.

She closed the umbrella, tossed it to the floorboard, and folded herself into the passenger seat. Heron had the door down as soon as her skirt was clear of the seals.

He’d examined this sector extensively in planning and had every escape route timed down to the second. He hadn’t counted on the law enforcement response being so fast, though, almost instantaneous. Road blocks and drones were popping up like dandelions every time he polled the mirror, and he had no defenses set up to counter them.

He knew precisely the speed at which information flowed, and there was no way within normal parameters the authorities could know her identity and location this quickly. Clearly, Mari had been set up. He even had a good idea who’d done it. The cloud, with its delicious glut of information, hovered just beyond his vision, tempting. He could see her doom erupting, 33.3 milliseconds behind real time, and he couldn’t do a damn thing to stop it.

No, that wasn’t true. He had a range of options, but the only one he allowed himself, the only one that made sense, was to get her away from here. Get her somewhere safe. Hide her.

Traffic became a torment, not just because his escape was slowed or capture crept closer with each passing second, but also because…she was here. Close. Too close. Within touching distance close. He could practically feel her vibrating with postjob adrenaline. Just eight blocks to the expressway entrance ramp. He endured them. Every bloody inch. Every stroke of her naked hands on the cushion. Every drip of skin-warmed rainwater from her ponytail, teasing its way down between her shoulder blades and along the seatback. Every push of her breath against damp synthetic cashmere. Every distant siren, every rolling update from his mirror… Interpol had her bios now, but he suspected the UNAN agents would find her first.

No. Over his goddamned corpse they would.

He hit the entrance ramp at 120 and blew into the cruise lane. The wireless exchange with the bus earlier had reminded him of another closed system, off-cloud. A bigger one. Private. Safe.

“Thought our exit vector was south. Cabana down in Cabo San Lucas and an endless tab of mojitos? This ringing a bell, partner?” Mari craned to see a road sign too blurry to read with naked eyes.

Heron cataloged the sign, crossed three lanes, and slung the car onto a flyover, taking them decidedly not south.

“I told you our plans had changed. No cabana this time, but don’t worry. I’m taking you someplace safe.”

“What place? Your place?” She waggled her eyebrows.

He inhaled deliberately. She doesn’t mean it the way it sounds. It is not an invitation. You know how she is. Bald come-hithers and poor timing were typical of her postjob process. Everybody had a different way of ramping up and down for jobs like this, and hers was invariable. A peek at her biometrics showed elevated hormone levels in her blood. Flight or fight or fuck, and Mari had an unnatural ability to suppress the first.

Any other job, he’d have her on a plane by now and off to the hired harem of cabana boys she needed to seduce to prove she was still alive. But this wasn’t any other job. This was a botch. On a contract held by Texas. She was in danger, and he didn’t have time to wrestle with her attempts to make him into another of her temporary playthings.

Temporary, because the only time she’d be able to stomach fucking a post-human would be right after a job. And then she’d hate herself after. He knew what she thought about people with implanted tech. Cyborgs. No better than machines.

And he sported a metric shitload of implanted tech.

So he’d kept their relationship purely professional, and there had never been a reason to alter that structure. Until today. Now, to keep her safe, he was willing to suffer a lot more than her derision. He was willing to lay bare his most deeply held secrets and hope she didn’t heckle. Or worse, send him away.

He accelerated through fourth gear, and the car lowered, uncomplaining, hugging the asphalt.

Fuck it all—he was taking her home. VIVIEN JACKSON is still waiting for her Hogwarts letter. In the meantime, she writes, mostly fantastical or futuristic or kissing-related stories. When she isn’t writing, she’s performing a sacred duty nurturing the next generation of Whovian Browncoat Sindarin Jedi gamers, and their little dogs too. With her similarly geeky partner, she lives in Austin, Texas, and watches a lot of football.

Enter to win one of ten copies of Wanted and Wired by Vivien Jackson!