Since I began writing western romance in early 2008, I haven’t really been able to stop. When I stopped to ask myself why, my #1 reason was of course those addictive cowboy heroes.

Alpha? Beta? Gamma? I can’t categorize my cowboy heroes or anyone else’s. Whether writing in the historical or contemporary western world, these heroes have a flavor all their own. Most cowboys are…

5) know what back-breaking work is and have the ripped physique to proof it, baby!

Judd Black, my first cowboy hero from Blackest Heart, is a prime example of all of the above. He’s a loner, the small town of Wayback, Texas’s “silent cowboy.” Though he isn’t entirely mute, thanks to his traumatic childhood, he only speaks to a select number of people—and shortly. His circle of trust is very small and other than his work on Ridge Range, he doesn’t get out much and is more than content to be home alone every night with his pet mutt. Until Stella Ridge comes back to her family’s Range to recover from a car accident, Judd likes his solitary life. Being as drawn as he is to the untouchable boss’s daughter is pretty frigging inconvenient…until he realizes she’s attracted to him, too. Then the real fun kicks off! He might like the quiet life but he has a daredevil streak and is a champion bull-rider. He revels in the rush of being on the back of wild, bucking beast for eight seconds. All reviewers for Blackest Heart had one thing to say in common: they love them some silent cowboy!

So what do you say for Judd? Alpha, Beta, or Gamma? Tough to pick, huh? Let’s try another: Casey Ridge, the hero of Bluest Heart and second in my Wayback trilogy. Casey can rough it with the best of them, having grown up on his family’s cattle spread, Ridge Range. Though he appreciates the back-breaking work, he wants to settle down. Only the woman he wants, Josie Brusky, doesn’t believe in marriage. So begins Casey’s efforts to charm Wayback’s ultimate single woman into tying the knot. The thing about this cowboy is that he’s not willing to give in once he’s decided he wants something bad enough. Though Casey has softer characteristics than Judd, he is one hot man and Josie’s wild attraction for him gets in the way of her refusal. How does one resist a dimpled smile, a six-pack, and some pretty fantastic cowboy lovin’ all in one undeniable package? Pretty impossible, if I do say so myself… 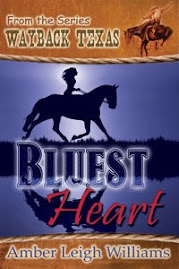 When I ask others why they love their cowboy heroes, it’s difficult to pin down exactly why. One if not all the above elements are listed. But most of all it’s that when you read about a cowboy, you’re pretty much guarenteed a hero who is strong, courageous, and adventurous and more than man enough to stand by his woman through thick and thin…once you get past that isolation streak, in Judd’s case, of course 😉

Blackest Heart, available now, and Bluest Heart are a part of The Wild Rose Press’s Wayback, TX series, “Where a Cowboy Falls in Love Every Eight Seconds.” I’ve been a fan of this series since reading Rita Thedford’s Hot Night at the Blue Bug Saloon and Judith Rochelle’s Shadow of the Hawk. Each Wayback release quickly jumps to the top of The Wild Rose Press bestseller list, evidence that I’m not the only Waybackaholic. I’ll leave you, Romance Junkies, with the most serious symptoms of Waybackaholics:

1) Chronic gawking – this is due in large part to the beautiful covers of Tamra Westberry’s creation. In particular, Rita Thedford’s Hot Night at the Blue Bug Saloon and Sylvie Kaye’s Wrong Side of Love

2) Soreness of the nose – caused by the insanely addictive nature of these HOT stories. (Readers have been found glued to the screen.)

3) Recurring distraction – experts believe this is due to two things: a) incredible love scenes and b) the dreamiest of dreamy cowboy heroes. This symptom will interfere with day-to-day activities (namely laundry, cooking, cleaning…) and may occur in the workplace where consequences could be much more severe

4) Fantasizing and/or playacting – this symptom isn’t particularly alarming. In fact, experts suggest it may be the reason many readers have         taken it up a notch in the bedroom. Imagining your SO Nash, Hawk, Luc, or Judd can definitely add more excitement to activities in between the sheets! (As of yet, no complaints have been filed by partners or spouses.)

5) Sulking – when readers flip to final place and their noses are pressed against a blank screen, inevitable sulking soaks in. But no worries,        Wayback may be a small town but there are many more cowboys to rope and tie down and more Wayback stories to enjoy! Check out         The Wild Rose Press and discover what real cowboys are all about!!!

“I love the way the air feels here,” she murmured, watching the fire in the sky take its sweet time burning out. “I love how it tastes.”

Her companion didn’t speak. Out of the corner of her eye, she saw a tall figure leaning against the fence. She turned her head when he didn’t reply. A stunning zap of electricity surged through her.

Judd had taken his hat off, revealing his thick crop of black hair, and was holding it between his hands draped over the fence line, elbows braced on the rail. His boot was propped on the lowest. His eyes squinted against the bright display, trained on the sun’s showcase. Beside him, sitting dutifully was an adorable mutt.

The man was an enigma. It got to her. That pleasant burning sensation began to swell within her again.

He straightened, catching her stare. She didn’t look away. Remembering how he’d raced with her over the field that afternoon, how he’d ridden that mean bull at the rodeo, she thought he must like challenges. Her admiration for him peaked.
She liked a challenge, too.

His brows rose as she stepped to him. Interest instead of astonishment filled his complex eyes. She came to a halt with the dog between them. “What’s with you, Judd?” she asked, punching just enough challenge into the question. “Didn’t Apache Jim ever teach you any manners? Didn’t anyone ever tell you how rude it is to stare?”

Something welled beneath the interest.

A sharp breath escaped her as she watched his eyes smile at her, crinkling up at the corners. She was the astonished one. Her body froze up when he reached out with one of those hard, wide-palmed hands. If she could’ve moved, she wouldn’t have stepped back.

His fingertips brushed over her damp hair, from her brow back over her crown. She fought against the urge to close her eyes, sigh and melt. Her scalp tickled under his light touch. His fingers combed through the ends of her tresses and repeated the motion, slower the second time through. She gripped the rail next to her, afraid she’d sway.

The amusement in his eyes had faded. They’d lifted to the scars she’d left exposed by combing her hair back from her face. His thumb traced the smooth, jagged line, tracing it to the corner of her eye.

She tried to read his face. The tender moment between them intensified. The tingles deepened. Though she wanted to turn his attention away from those imperfections on her face, she drew comfort from his whispering touch. His eyes darkened. There was anger there now. He was angry she’d been hurt. Her heart picked up pace, welcoming his fury.

She allowed her eyes to close. Her blood was singing, warming skin chilled by the nightly breeze. She could hear him breathing, just barely. Edging closer, she reached up to touch him. Her fingers found the chords of his upper arm. They wrapped around them, gripping them for support.

His fingertips found the scar by her mouth and began to trail down the angled mark. Her eyes popped open, fixed on his and her breath seized when he touched the very corner of her mouth. His fingers lingered, eyes tracing the line of her lips. She wanted his mouth to do the same. She waited breathlessly, heart thudding hard between them.

Amber Leigh Williams is a member of Romance Writers of America, Secretary and PRO Chapter Liaison of the Gulf Coast Romance Writers, and monthly contributor to Romance Writers United Write Right newsletter. She is the award-winner author of romantic adventure Fox & Hound, romantic suspense Denied Origin, western romance Blackest Heart, and contemporary romance A Summer’s Hope. She lives on the Gulf Coast with her husband and three labs. Learn more about her books and articles by visiting her on the web at http://www.amberleighwilliams.blogspot.com.

2 Responses to What's in a Cowboy?