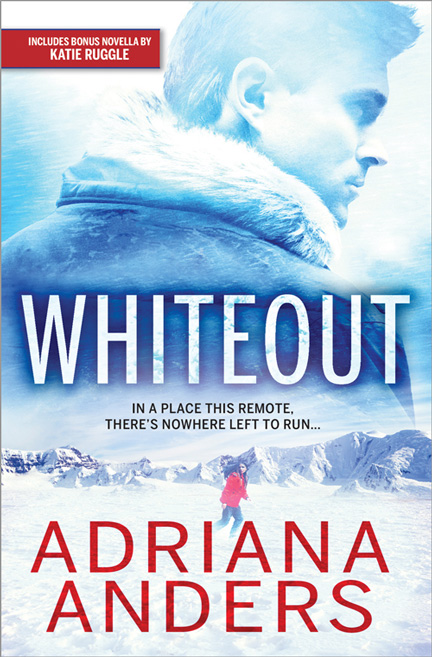 With a storm coming and a killer on the loose, every step could be their last…

Angel Smith is finally ready to leave Antarctica for a second chance at life. But on what was meant to be her last day, the remote research station she’s been calling home is attacked. Hunted and scared, she and irritatingly gorgeous glaciologist Ford Cooper barely make it out with their lives…only to realize that in a place this remote, there’s nowhere left to run. With a storm coming and a killer on the loose, every step could be their last…

Angel Smith is finally ready to leave Antarctica for a second chance at life. But on what was meant to be her last day, the remote research station she’s been calling home is attacked. Hunted and scared, she and irritatingly gorgeous glaciologist Ford Cooper barely make it out with their lives…only to realize that in a place this remote, there’s nowhere left to run.

Isolated with no power, no way to contact the outside world, and a madman on their heels, Angel and Ford must fight to survive in the most inhospitable—and beautiful—place on earth. But what starts as a partnership born of necessity quickly turns into an urgent connection that burns bright and hot. They both know there’s little chance of making it out alive, and yet they are determined to weather the coming storm—no matter the cost.

They finished dinner, cleaned up, and went about getting ready for bed.

“Better take care of those feet,” he said.

A low sound of protest emerged from inside the sleeping bag, where Angel had already taken up residence. “Can it wait till the morning?”

“Frostbite’s not something to mess with. Let’s see them.” He didn’t intend to sound quite so bossy.

“I’ll do it.” Her words were slurred.

“You can barely move.” He held on to the kit, obstinate—and something else. Responsible, maybe. “I saw you limping out there. Your knee’s bugging you. Don’t deny it.”

She threw him a glare, but surprised him by complying.

He took hold of one slender foot and stripped it gently but quickly, since even in shelter, the risk of frostbite was real. It was light in his palm and mostly warm enough to alleviate his worry, though her toes were chilly. He touched each one. “Any numbness?”

She shook her head.

With great care, he peeled the bandages off, cleaned her skin, and reapplied fresh ones where needed, slipping the sock back on before starting the whole process with the other foot.

He couldn’t say exactly when it occurred to him that he held her naked foot in his hand, but once the realization popped into his head, it wouldn’t go away. Hung around like an itch he couldn’t get to.

A foot, for God’s sake. Ridiculous.

But the foot didn’t feel ridiculous right now. He gently squeezed it and expelled a harsh breath.

It felt…improper. Especially in comparison with the rest of her fully clothed body. And secret, somehow. He knew things about her now. He knew her second toe was longer than the big one, that her arches were high and elegant, her skin already roughened from two days of marching in the freezing desert air. He knew she’d put on a bright red nail polish at some point. It’d worn mostly off, but it made her toes look like candy. And he’d never craved sugar so badly.

The best course of action, now that she was all bandaged up, was to give her back her foot.

Instead, he ran his thumb along the central curve, pressed forward beneath her toes, then down to her heel. The sounds she made were—he swallowed—obscene. A shocked gasp that urged him to look her way. He didn’t, though, because if their eyes met, he might have to stop.

And that was the last thing he wanted to do.

Another rub, deeper this time, bearing down on aching muscles. But it didn’t sound like pain when she moaned, low and guttural, and though he knew better, he let his eyes slide up her body to her face.

He froze. He’d never seen anything hotter—not on-screen or in the throes of sex or in his darkest fantasy.

Mouth open, eyes closed, cheeks flushed, everything about her screamed pleasure. Just to be sure, he stroked back and pressed again, wanting—no, needing—to know which notes this spot would play on her ever-changing face.

And she didn’t disappoint. Every feature cringed, slowly, sensually, in a magnified expression of pleasure-pain. Sweeping up to caress her toes now was sheer torture, because he was hard—shocking in this cold—and her reactions, though subtle, were more intimately real than any peepshow.

He could’ve gone on forever, rubbing, rapt, eyes glued to her face as she showed him just how good he made her feel, picturing how amazing she’d look if he were kissing her, or—

Her eyes popped open, ensnaring his in their velvet trap.

Everything went quiet, stilling as if the storm had taken a breath. Or maybe it was him going a little deaf, like when his ears needed popping in a plane. Except he could hear the things happening in this tent. Could feel and smell with overwhelming precision every fine detail blown up under a microscope.

They shared a couple hard inhale-exhales, the tension between them as palpable as the frigid temperature.

The press of his fingers lessened, his caresses slowed, until he did nothing but grasp her foot while she just as steadily held his gaze.

“That feels amazing,” she said in a bedroom whisper that he could feel deep in his bones, though it couldn’t possibly be loud enough to hear.

Her mouth closed and his attention flicked down, watching her swallow with something awfully close to hunger before sliding back up to find her eyes boring into him.

Adriana Anders is the award-winning author of the Blank Canvas series. Under Her Skin, a Publishers Weekly Best Book of 2017 and winner of two 2018 Holt Medallions, has been featured in Bustle, USA Today Happy Ever After, and Book Riot. Today, she resides with her tall French husband and two small children in France, where she writes the gritty, emotional love stories of her heart.