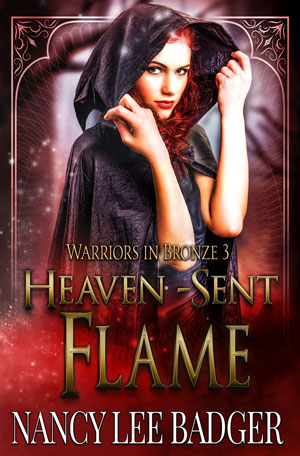 Why Writers Travel Through Time by Nancy Lee Badger

Time travel is a broad term used by a variety of authors who write science fiction, paranormal, or romance. With the wide-spread success of the tv show Outlander, which is based on a multi-book series by Diana Gabaldon, time travel romance has found its stride. My current Warriors in Bronze series features character from another time who finds themselves waking up inside a statue in the Rodin Garden at the fictious Raleigh Art Museum. I based the present-day location on the real and close by North Carolina Museum of Art. This 164-acre museum also has open walking and biking trails, two large water features, and is interspersed with giant art. In books #1 and #2 these characters, who happen to be a male from Paris and a Highlander from Scotland, respectively, must learn to live in the present while figuring out their newly-acquired abilities. Having a deadly demon trying to kill them and their new friends at the same time makes for a fast-paced plot. The third and final book, Heaven-sent Flame, which was released by Soul Mate Publishing April 22nd, has a plot twist. It starts in the Highlands of 18th century Scotland with a woman born in London who was sent to live in a coven of witches. She ends up in the present and things go from bad to worse. The ending is different because she returns home for a while.

Time travel usually works best when the character is placed in a different time and feels like a fish out of water. Sometimes only the reader knows what this person is dealing with. Sights, sounds, and even figures of speech can seem too foreign to comprehend. It is what the character accomplishes with their handicap and their abilities that makes the reader hope all ends well.

An English lass grows up in a Scottish coven only to awaken in a strange new world with sculptures, a handsome man, and a hate-filled demon. Falling in love while saving the world was not the plan!

“My name is Somerled Walker, but please, call me Sam. And you are?”

“Pleased to meet you, under the circumstances. Zinerva is wicked. She wanted me to follow her, but she is a demon. I wish I realized that before I let her kiss me.”

“Looked like ye were enjoying kissing her. Maybe she had ye under a spell?”

He turned and stood so close the heat from his body made her damp red curls tighten about her shoulders.

“Not exactly. She’s no damned witch. She claimed to hate them as much as me. She used her otherworldly wiles on me, but I finally got her talking. Women like to talk about themselves.” His grin was boyish, but beneath the moonlight his chest glowed like solid silver flesh. She tugged her gaze away and realized what he’d claimed.

“Are ye placing me in that group?”

“Perhaps you awakened from inside one of the trio of statues by the sculptor Auguste Rodin called The Three Shades. I wouldn’t be surprised, though I assumed you were male.”

Planting her hands on both hips, she glared at him. “Last time I looked, I was female, through and through.” He talked about a statue as if assuming she had come from inside it. How would he know such a thing? She was not sure how she arrived, or even if the statue was indeed her tomb, just that she’d found herself laying free at its base.

His eyes widened, then glanced up and down her body. She suddenly realized that raising her arms uncovered more skin below the hem. Her secret place began to throb beneath his perusal. The sensation was maddening, so she lowered her fists to her sides.

“So,” he continued, “if the statue led you here, your powers are due to being a Heaven-sent warrior.”

Sam kicked a pebble into the pond beyond the tree and sighed. “Not another one. Why would Heaven send another warrior without explaining the rules to them first? This will take time.”

“How much time?” What he said made no sense.

“Time I did not plan to spend in Raleigh.”

Buy Links can be found HERE Nancy Lee Badger grew up in Huntington on New York’s Long Island, where school field trips to lofty museums were the norm. After attending Plymouth State, in New Hampshire, she earned a Bachelor of Science degree in Art Education and met and married her college sweetheart. They raised two handsome sons in Rumney, New Hampshire, where Nancy volunteered as an EMT and firefighter while working full-time. When the children had left the nest, and shoveling snow became a chore, she retired from her satisfying job as a 9-1-1 Emergency Medical Dispatcher and moved with her husband to North Carolina, where she writes full-time.

Nancy is a member of Romance Writers of America, Heart of Carolina Romance Writers, Fantasy-Futuristic & Paranormal Romance Writers, and the Triangle Association of Freelancers. She loves to travel and attend Scottish Highland Games and is never far from her laptop. She finds story ideas in the most unusual places. Connect with her here: