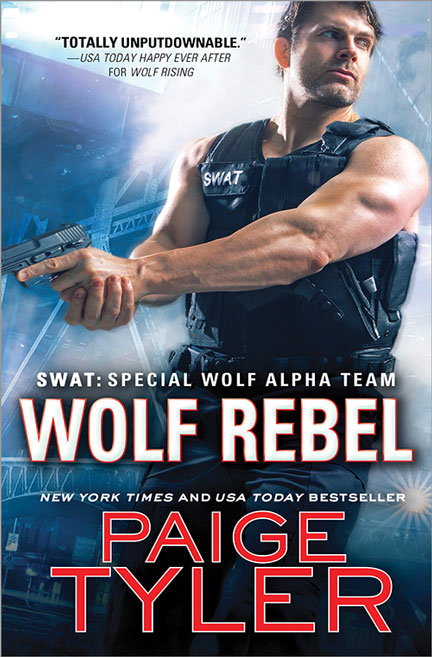 “This fast-paced procedural brims with heat and action.”—Publishers Weekly for Wolf Rising

“If you love hunks in uniform, a spitfire heroine, drama, danger, intrigue, and some really steamy moments then get your hands on Wolf Rising.”—Fresh Fiction

“Action-packed, sizzling fun for fans of paranormal romantic suspense.”—Booklist for In the Company of Wolves She let him get away

SWAT werewolf Rachel Bennett is hounded by nightmares after a vicious attack left her with PTSD. Not knowing who or what she can trust anymore, she’s relieved to be assigned to a high-profile protective detail. Diving into work might be the distraction she needs, until she notices the mysterious hunk who seems to follow her wherever she goes—and recognizes him.

Now he needs her help…

After he’s badly injured, former Navy SEAL Knox Lawson seeks out Rachel when he realizes he’s turning into a werewolf. He’d once been part of the group hunting her kind, but he knew he had to quit when he found Rachel in his crosshairs. Now he desperately needs her help.

Rachel isn’t sure she trusts Knox, but having him around keeps the nightmares—and the monster creating them—away. Knox might not know much about being a werewolf, but there’s no doubt he’ll do everything in his power to win her trust and keep her safe.

She leaned against the balcony railing to do a little stargazing from the second-floor deck when two scents that were becoming overwhelmingly familiar hit her. It was the same combination of scents she’d picked up this morning at the compound.

But this time it wasn’t some slight trace carried on the breeze. Instead, it was thick and heavy, like whoever the scents belonged to had been standing on the balcony mere seconds ago. It struck her then that this was the first time she’d attributed the smell to a person. Before now, she hadn’t been quite sure.

Hand tightening on her mug, she swept the street below her apartment with her gaze, taking in every car parked on the curb and row of buildings on the other side of the street, following the smell with her nose. It was strongest in that direction and she inhaled deeply. The scents were richer and fuller than she’d sensed before. And they definitely belonged to a man. Of that she was sure. The scents possessed a subtle hint of something so tantalizing that Rachel found her eyes going slightly unfocused as she fixated on it. She’d never smelled anything so…perfect.

Suddenly, she caught sight of movement across the street, buried in the shadows of the alley that ran alongside the organic food store. She turned all her attention in that direction, her eyes shifting so she could see better. That’s when she saw a man’s silhouette in the darkness.

As if sensing her gaze on him, the man retreated farther into the alley, and while she couldn’t see him, she could tell he was still there somewhere.

Setting her cup on the small table in between the two chairs, Rachel gripped the balcony railing and vaulted over it to the ground below. Her bare feet hit the sidewalk hard, but she ignored the discomfort and took off running across the street, chasing after the shadow.

The rocks and stray pieces of glass in the alley dug into her feet, but she refused to let that slow her as she ran as hard as she could. For a werewolf like her, that was pretty damn fast. But the man ahead of her was fast, too—too fast to be a normal human.

Crap, she was chasing another werewolf. She almost stumbled to a halt at the realization, shocked she hadn’t recognized the unique scent until now. How was it possible she hadn’t known it for what it was? Maybe because it had changed since she’d first smelled it all those weeks ago. The werewolf part of the scent seemed new.

Growling, she picked up speed, her body partially shifting as she ran faster, refusing to let the man ahead of her get away. It took a while to corner him, but when her prey turned down a dead-end alley, she knew she had him.

He didn’t stop running until he reached the brick wall at the end of the alley. Then he stood there and stared at it as if trying to figure out how to go through it. Dark-haired, he was tall with broad shoulders and sleek muscles filling out the T-shirt he wore. He looked left and right, breathing hard as he searched for an escape route.

“You’re not getting out of this alley,” Rachel told him, not even trying to disguise the anger in her voice. This guy had been stalking her for weeks. He was lucky she didn’t rip him to shreds first and ask questions later. “Not until you tell me who the hell you are and what you want with me.”

Squaring his shoulders as if resigned to his fate, he slowly turned to face her. His hair was short on the sides and longer on the top, and his face carried a few days’ worth of scruff that emphasized his square jaw, making him look dangerous and even more attractive than he probably had a right to. His eyes were a deep, rich chocolate brown, piercing but somehow soft at the same time.

She was well on her way to getting lost in those eyes when she suddenly realized she recognized him. He was the hunter she’d let get away. A hunter who was a werewolf.

In the Company of Wolves (Book 3)

Paige Tyler is a New York Times and USA Today bestselling author of action-packed romantic suspense, romantic thrillers, and paranormal romance. Paige writes books about hunky alpha males and the kick-butt heroines they fall in love with. She lives with her very own military hero (a.k.a. her husband) and their adorable dog on the beautiful Florida coast. Visit www.paigetylertheauthor.com.