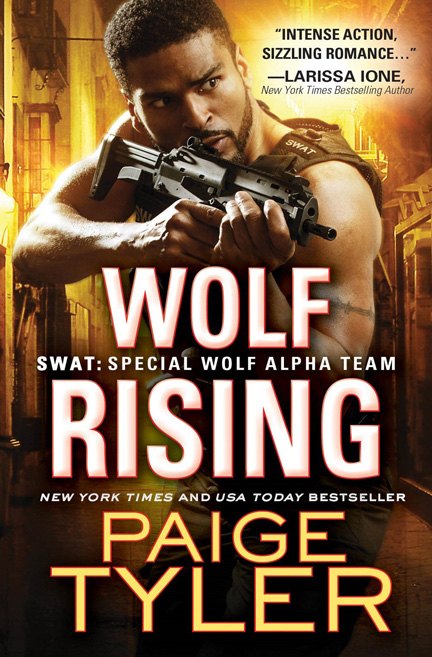 SWAT Officer Jayden Brooks doesn’t believe there’s a soul mate out there for him—The One. But when he saves high school teacher Selena Rosa from a hostage situation, he knows he’s in big trouble. Her scent is irresistible. Selena finds the big cop irresistible, too. In fact, the buttoned-up teacher gets a little carried away—during a steamy make-out session, she bites him. Turns out, the traumatizing events at the school triggered her werewolf gene… Just when he’s found The One…he might lose her.

SWAT Officer Jayden Brooks doesn’t believe there’s a soul mate out there for him—The One. But when he saves high school teacher Selena Rosa from a hostage situation, he knows he’s in big trouble. Her scent is irresistible.

Selena finds the big cop irresistible, too. In fact, the buttoned-up teacher gets a little carried away—during a steamy make-out session, she bites him. Turns out, the traumatizing events at the school triggered her werewolf gene. Fangs and claws are appearing and her aggression is out of control. The change is happening, and Selena doesn’t understand.

It’s going to take everything Brooks has to pull her back from the edge…and ultimately win her heart.

“Thanks for helping with the salad,” Selena said, peeking around his shoulder and watching him work. “But I’m almost afraid to ask, where’d you learn how to handle a knife like that?”

Brooks chuckled as he peeled another carrot, then made a quick series of julienne cuts to turn it into long, slim pieces slightly bigger than matchsticks. “I’d love to tell you I picked up my knife skills in the CIA or someplace cool like that, but to be truthful, my mom taught me. She loves all those cooking shows on TV and makes me watch them with her every time I visit.”

When Selena didn’t say anything, Brooks turned his head to see her standing beside him with a stunned expression. “What, did I just blow your whole image of me by admitting that?”

She shook her head. “Not at all. I’m just trying to figure out how you could possibly get any better. You’re attractive, heroic, show up for our date on time, bring wine, help me make dinner, and now I find out you visit your mother. It’s enough to make a girl wonder what kind of deep, dark secrets you’re hiding behind those captivating eyes of yours, because nobody’s that perfect.”

He could think of one deep, dark secret he was definitely hiding that he’d love to tell her about, but he resisted the urge. Selena wasn’t ready for something like that yet. Then again, was she likely to handle it any better after dinner? For that matter, was it going to be any easier for her to take three days from now?

Probably not. But like Gage had said, it was up to Brooks to figure out when and how to tell her. He only hoped he didn’t screw it up.

“Trust me, I’m far from perfect,” he finally said with a little laugh as he finished cutting the carrot and added it to the salad. “Just ask the other members of my team. They’ll be quick to point out all my faults and failures.” Selena leaned her hip against the island, her long hair falling over her shoulder as she gazed up at him with those beautiful dark eyes of hers. “You realize you’re just making it worse, right?”

It was kind of hard to think clearly when Selena was this close to him. The scent of arousal that had been coming off her since he’d first walked in the door was captivating. Brooks wasn’t sure exactly what was going on, but he assumed it was some kind of subconscious reaction on her part. Maybe her inner werewolf taking notice of him as an alpha.

He’d considered slipping off to the bathroom to send a quick text to Khaki and ask if she knew why a female werewolf would put off pheromones like this but quickly decided against it. Mostly because he had no idea how he could possibly bring this subject up in a text to a woman, even if she was a member of his pack. Selena continued to gaze up at him, eyes like two deep pools of melted chocolate. For a moment, he thought she might actually kiss him, but then she spoke.

“I’ve met lots of guys who think they’re all that and go out of their way to tell every woman they meet. Yet here I am showering you with compliments, and all you can say is that you’re far from perfect. Trust me, women like a man who’s both sexy and humble.”

Brooks snorted. “I’m not sure if many women out there would agree with you. If they did, I probably wouldn’t still be single.”

Selena shrugged, the movement doing amazing things to the cleavage exposed by the curve-hugging dress she wore. “I can’t say for sure yet, since we just met, but something tells me the reason you’re single is that you’ve been hanging out with women who don’t know what they’re looking for in a man—or wouldn’t know it when they see it.”

Brooks considered the single real relationship he’d had and the string of short-term failures and decided Selena was pretty spot-on. Most of the women he’d gone out with hadn’t seemed to know what they wanted out of a relationship. Or they’d wanted something completely different than he did. On the flip side, he was man enough to admit he’d rarely known what he’d been looking for in a relationship, either.

Though that seemed to be changing quickly.

“How about you?” he asked. “Do you know what you’re looking for in a man?”

Heat blazed up in her eyes, making them glint enough for him to think they might actually be glowing, but Selena leaned past him to pick up the salad bowls before he could be sure

Turning, she headed for the table, her hips swaying hypnotically as she moved, her dress showing off just enough of her shapely legs to tease him. That, along with Selena’s words, made him harden in his jeans and pulled a low, rumbling growl from his throat.

Oh yeah. He was hungry all right.