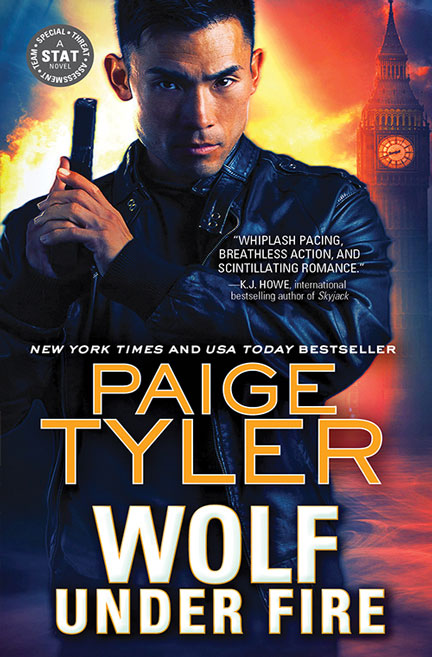 For the cases no one else can solve, they send in the Special Threat Assessment Team

Supernatural creatures are no longer keeping their existence secret from humans, causing panic around the globe. To investigate, monitor, and—when necessary—take down dangerous supernatural offenders, an international task force was established: The Special Threat Assessment Team.

STAT agent Jestina Ridley is in London with her team investigating a suspicious kidnapping. Over her radio, Jes hears her teammates being savagely attacked. She runs to help, but she’s too late… For the cases no one else can solve, they send in the Special Threat Assessment Team

Supernatural creatures are no longer keeping their existence secret from humans, causing panic around the globe. To investigate, monitor, and—when necessary—take down dangerous supernatural offenders, an international task force was established: The Special Threat Assessment Team.

STAT agent Jestina Ridley is in London with her team investigating a suspicious kidnapping. Over her radio, Jes hears her teammates being savagely attacked. She runs to help, but she’s too late. The only survivor, Jes calls for backup and gets former Navy SEAL and alpha werewolf Jake Huang and his new pack. Convinced that the creature who butchered her teammates was a werewolf, Jes doesn’t trust them. But if they’re going to uncover the facts and make it back home alive, she’ll need Jake’s help. And with everything on the line, Jes will have to accept Jake for who he is, or lose the partner she never expected to find…

Jes sprinted down the hall without giving it a second thought. Grabbing the last man through the door by the collar of his jacket, she yanked him backward, flipping him over her hip and slamming him to the floor before he knew what was happening.

Balling her hand into a fist, she punched him in the throat hard enough to stun him, then ripped his pistol out of his grasp while he was gasping for air. Refusing to think about the brutality of the situation, she placed the barrel of the large-caliber automatic against the man’s chest and squeezed the trigger. In this position, the recoil of the big weapon was ferocious, but she ignored it—and the resulting blood—focusing instead on snagging the extra magazine from the man’s underarm holster.

Getting to her feet, she approached the room carefully. The last thing she needed was to catch a stray round from one of the guards—or Jake.

Pressing her back against the wall outside the open door, Jes darted to take a quick look inside. The room was filled with acrid smoke from the flashbangs, but she could still see the dead bodies strewn across the floor. Jake and Misty were nowhere in sight and something told her they’d taken cover behind the heavy desk that was flipped over.

The piece of furniture was thick enough to stop the spray of bullets the men were popping off, but the gunfire was so intense Jake couldn’t even try and get off a shot in return. Since the bad guys were already spreading wide to circle around and come at the desk from both sides, the situation was only going to get worse.

What if Jake had already been hit?

That thought scared the hell out of her. She’d heard a werewolf could absorb a lot of damage, but how much was too much?

“Backup’s arrived,” Jes announced loud enough for Jake to hear her in his earbud, even over the gunfire, then took aim and started shooting.

The moment the men realized someone was coming at them from behind, they turned their weapons on her. At the same time, Jake popped up from behind the desk and began blazing away with the automatic in his hand. Bodies started dropping under the combined effort.

Jes was sure they’d gained the upper hand, but then a flashbang came at her through the light haze of smoke still filling the room from the previous ones. Cursing, she leaped back into the hallway to keep it from blowing up right in her face. She hit the floor hard, the air getting knocked out of her. Ears ringing, she scrambled around and lifted her pistol, knowing a bad guy would be coming to finish her.

But no one did. A moment later, the shooting stopped. It was immediately replaced with a roar and a growl that seemed to echo through the house and make the entire third floor vibrate.

Jes quickly climbed to her feet, only to fall on her butt again as Jake and Damien crashed through the wall. Somewhere along the way, they’d lost their weapons and were now locked in hand-to-hand combat, like two enraged monsters. Jake wasn’t the only one with claws, either. Damien had them, too.

Jake had been sure the creature that had attacked Jaime and Neal wasn’t a werewolf, but seeing Damien fight, she was beginning to think Jake had been wrong.

Jes got up on one knee, trying to get a shot at Damien, but he and Jake were moving way too fast as they smashed each other into first one side of the hallway, then the other, fists slamming into their opponent so hard she could hear bones break.

She was about to say the hell with it and take a shot at Damien regardless of the risk, but then he slung Jake bodily across the hall, bouncing him off the wall. Even though it had to hurt, Jake immediately jumped to his feet and kicked Damien in the center of his chest, shoving him halfway down the hallway.

Jes didn’t waste the opportunity. Lifting her weapon, she emptied the remainder of her magazine in the man’s chest. Damien flew backward from the impact of all those rounds hitting, slamming into the floor so hard she felt it. She didn’t give a crap if he was a werewolf. That many bullets through the center of his chest had to mean he was freaking dead.

Dropping the spent clip, she quickly slammed a new magazine in and chambered a round. The son of a bitch had killed Jaime and Neal and tried to do the same to Jake. It took everything in her not to put all the bullets in the fresh magazine into him. The only thing stopping her was the knowledge that she might need them if they had to fight their way out of the manor.

She was so focused on keeping her weapon trained on Damien where he lay on the floor, she didn’t even realize Jake had disappeared back into the room until he ran out with a limp Misty in his arms. Jes’s heart sank like a stone.

“We need to go,” Jake said, striding past her and heading down the hallway away from the steps. “We’re about to have more company.”

Jes didn’t ask how Jake knew that. She simply chased after him.

The fight with Damien must have caused him some serious damage, but Jake carried Misty without slowing down. They were almost at the end of the corridor when she heard the thud of footsteps on the stairs behind them.

Jes glanced over her shoulder to see at least ten armed men reaching the third floor. That was bad enough. But then Damien sat up, shirt covered in blood and looking pissed as hell…and not nearly as dead as he should be. Suddenly, the group of armed men didn’t seem like a big deal. Damien worried her way more.

Turning, she sprayed the men—and Damien—with half the rounds in the magazine just to make them duck, then ran after Jake again. She expected him to seek refuge in the last room along the hallway. Instead, he yanked open the french doors at the end of the corridor with one hand, exposing a small Juliet balcony.

What the hell were they going to do with that? It wasn’t like they could hide out there. The balcony was too shallow. Besides, Damien and the rest of Darby’s men had already seen where they were headed.

Jes was about to ask Jake as much when he gently placed Misty on the floor. Before she could question the move, he turned, put both hands on Jes’s waist, then swung her over the metal railing of the balcony, holding her by one wrist and dangling her like a toy.

“When I let you go, grab the railing of the veranda below us,” he said, dark eyes intent on hers.

Jes opened her mouth to tell him he was insane—that she wasn’t a werewolf with superstrength and animallike reflexes like him—but she was already falling. She released the pistol she didn’t even realize she was holding, somehow miraculously grabbing the railing on the second-floor veranda before she fell to her death.

Crap. It felt like her shoulders were being ripped out of their sockets.

She was never doing that again.

Jes was still hanging there in midair when she felt as much as heard Jake leap past her. She looked down just in time to see him land on his feet on the lawn below her, Misty wrapped firmly in his arms.

He’d jumped from the third floor of a building—with someone in his arms—and landed on his feet.

Setting Misty on the ground, he scooped up the automatic pistol Jes had dropped, firing it at something above her. She flinched when the bullets struck the metal balcony, but then felt like cheering when the men up there grunted as other bullets struck flesh.

“Let go!” he shouted to Jes before shooting another volley at the floor above her. “I’ll catch you.”

That idea was even crazier than the first one, but Jes did it, falling at a dizzying speed. She opened her mouth to scream, unable to stop herself, but then strong arms snatched her out of the air before setting her on her feet. She barely had a chance to catch her balance before Jake grabbed her hand and dragged her away from the manor.

He scooped up Misty in one arm on the way even as bullets kicked up the grass all around them. Seconds later, the big Rolls-Royce SUV was barreling across the lawn toward them, Harley at the wheel. The moment it skidded to a stop, Forrest jumped out of the passenger seat to take Misty from Jake while Caleb got out of the back and fired a MAC-10 machine gun at the remaining men on the third floor. Jes wasn’t sure if he hit anyone, but they sure as hell ducked.

Jake led Jes past Caleb and practically shoved her into the backseat, then jumped in after her, deftly climbing over her to take the window. The big omega followed, sitting on the other side of her and yanking the door closed as Harley floored it, tearing the grass to all hell as they sped away.