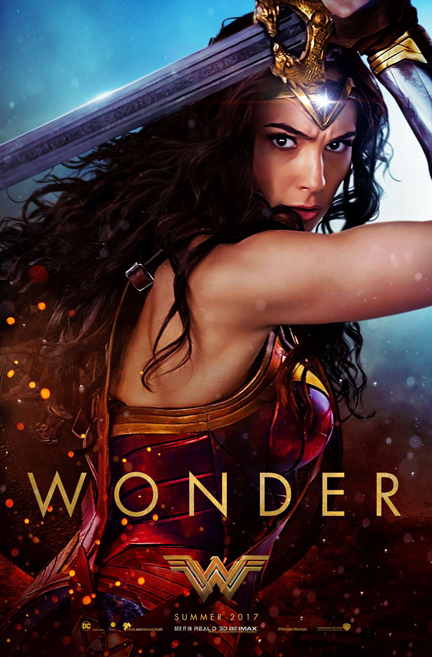 WONDER WOMAN, the movie based on the DC comic superhero, stars Gal Gadot as Wonder Woman and Chris Pine as Steve Trevor, an Allied spy in WWI. It’s an amazing movie truly worth seeing. I’m not normally that satisfied by the movies I see. But I’d give this one a solid A for the performances, cinematography, plot, and tight pacing. The movie never lags. It has a few humorous parts, somber notes dealing with war and humanity, and is filled with action and adventure that’s not stale or canned, but brings excitement to the big screen. This is a movie well worth seeing a few times. The movie starts out in the present day and tells Diana’s backstory as she stares at an old photograph. It’s a way to tie the present day Diana to the past, then bring us back at the end to show us she’s still around (hello Justice League Nov 2017). Diana is an Amazon princess of Themyscira, daughter to Queen Hippolyta. The casting of Gal Gadot was spot-on. I loved her in this role, and she did Wonder Woman true justice.

Diana wants to fight, but her mother forbids it, so Diana is taught in secret by her aunt. But there’s subtext to the queen’s refusal to let her daughter train, and as events unfold, it’s best Diana learned when she did. Before long, an American crashes into the water around the island of Themyscira, and the action takes off.

I like the way they used the Steve Trevor character to move the plot along. He brings Diana into the real world, and also serves as a foil to show her what humans can be capable of. She goes back with him to stop this “war to end all wars” in hopes of killing Ares, the god of war, whom she believes responsible for all their troubles.

Dealing with politics, the silly fashion sense women had back then, and a woman’s place in society, Diana has to figure out how she fits in and what she can do to help the helpless. There are a few terrific speeches about being a leader and protecting the innocent. Steve and some misfit associates come together with Diana to head to the front on a mission to stop the war. There’s a bit of romance thrown in, but it’s done in a way that enhances Diana’s maturation instead of focusing on Wonder Woman as a love story. It isn’t.

Wonder Woman serves as a movie that celebrates this character’s place among the DC pantheon of superheroes. The fight scenes are magnificent. The storyline flows, and the characters are fleshed out. Even the enemy has depths, though I would have liked to have known a bit more about Doctor Poison (as well as Steve’s secretary, Lucy, come to think of it.)

The tone of the movie is dark, and the scenes contain violence. It’s World War I after all, and people are killed, soldiers wounded and shell-shocked, and innocent Princess Diana a witness to it all. I don’t know how comfortable I’d feel taking younger children to see this.

But all in all, I left the theater wanting to see the movie again from the start. A solid A from DC, finally, to make up for that horrible downer Batman v. Superman: Dawn of Justice. Ugh. Then again, the only thing I liked about that one was Wonder Woman (and seeing Henry Cavill as Superman–because, it’s Henry Cavill.)

NOTE: If you do watch the movie, you don’t need to sit through all the flippin’ credits, as I did, expecting some trailer or hint of a future film. It’s not Marvel, for sure. But well worth the money spent.

One Response to Wonder Woman Movie Review: SOLID A!!